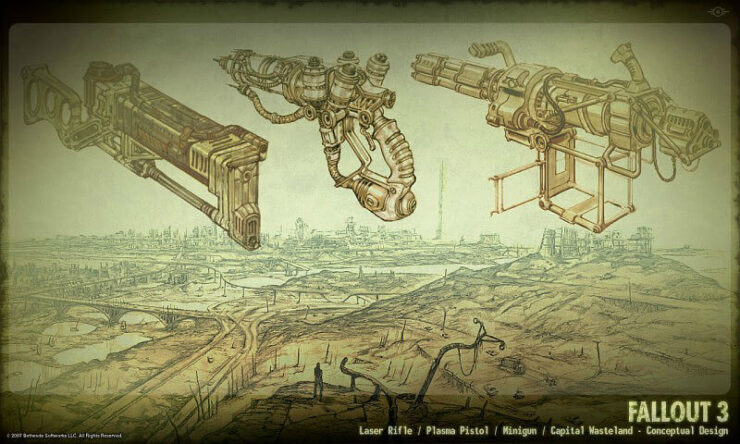 This will be my top 10 favorite Fallout 3 weapons in order of usefulness/preference. In order to keep it simple, I am only listing weapons from the base game and excluding weapons introduced in DLC. Most of these weapons have a unique counterpart which will be named after I give a little info on the weapon and why it’s my favorite. Take this as a list of useful weapons for beginners.

Background: The Mesmetron is an experimental pre-War “non-lethal pacification” weapon that was being tested in the months immediately preceding the Great War. It operates by sending a signal pulse into a human target’s brain that scrambles higher-level mental functions, leaving the target extremely susceptible to suggestion. Still in its testing phase, the weapon was found to have the potential to trigger two undesirable side-effects: extremely increased aggression, or spontaneous cranial eruption.

Slendy’s opinion: While this is not an effective weapon in open combat, as alerted enemies have a much smaller chance of being effected by it, it has two great uses. The first being the ability to make caps by enslaving NPCs for Paradise falls, netting 250 caps per slave (and a -100 karma deduction). The second is the ability to stun targets if on a non lethal play through. You must, however, be aware of the fact that the beam can also cause targets to frenzy… or have their heads pop in a fountain of gore. Fun stuff 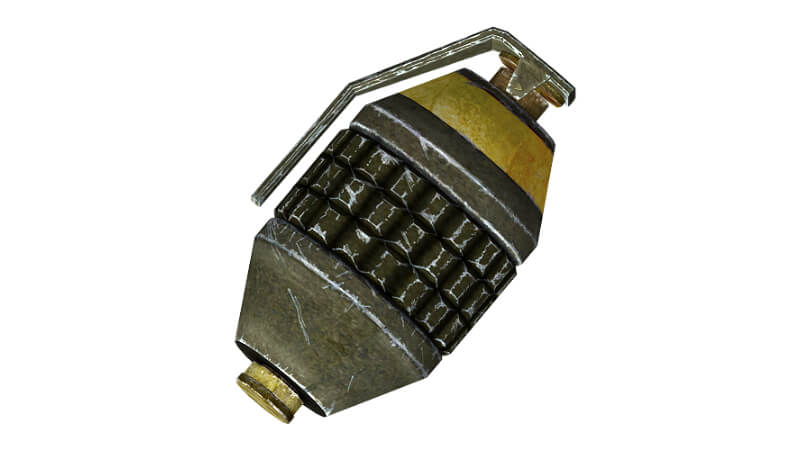 Background: Frag grenades are standard grenades creating an explosive blast and dealing significant damage, with a high chance to cripple limbs. It seems to have the same blast radius as its more powerful energy-based variant, the plasma grenade. They are commonly used by melee-equipped raiders and super mutants when they are out of melee range.

Slendy’s opinion: Frag grenades are something you want on you at all times. When facing a raider encampment, it’s simple to just toss a few in to soften their numbers and cripple their limbs. On top of that, frag grenades, as well as frag mines, are easy to come by, and can be a great way to even out a barter, as they have a fairly high value.

Background: These weapons are remnants from the United States’ war with China, an event that triggered the Great War. They were most likely brought back by American soldiers fighting in various campaigns in mainland China or were brought by Chinese infiltrators and saboteurs like the ones at Mama Dolce’s and elsewhere throughout the United States.

Slendy’s opinion: If you are looking for a good melee weapon, look no further. Though they can be a bit hard to come by, the speedy striking speed and relatively high damage make this a viable weapon for any level player

Background: This sniper rifle is an older model of the famed DKS-501. Chambered for .308 ammunition, it’s also extremely fragile and requires regular repair and maintenance to keep it in working condition. The sniper rifle is the top-tier long-range weapon. It has a scope and deals much more damage than the hunting rifle, but has a very rare ammunition type and is a very fragile gun.

Slendy’s opinion: A very powerful gun to be sure, and is great for getting sneak criticals on far away enemies. The reason this sits so low on my list however, is that the combination of sparse ammo, swaying scope and horrible deterioration means a player should only use this weapon when necessary. However, it is still a weapon any good Lone Wanderer should possess 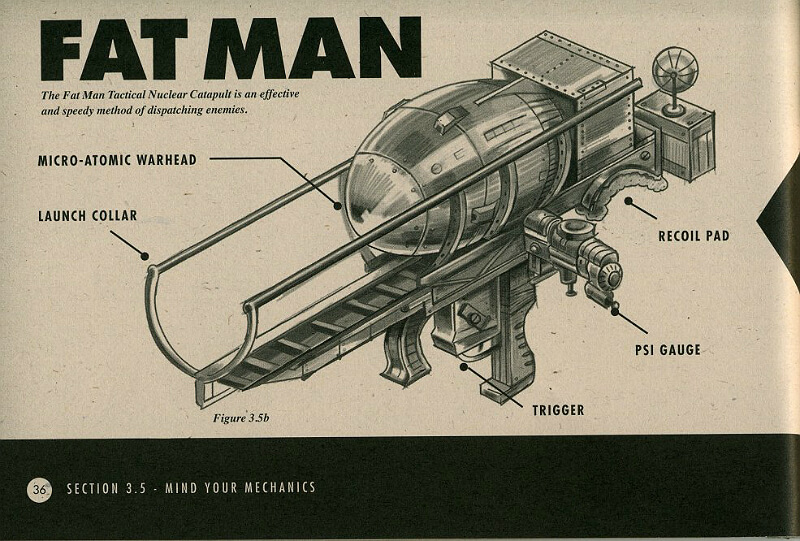 Background: The Fat Man is a pre-War heavy weapon that launches mini nukes. The mini nuke projectile is very heavy, and if simply fired straight ahead, it will travel only a short distance before falling to the ground and detonating (causing you to be caught well within the very damaging mini-nuclear blast). The Fat Man has an estimated range of 150+ yards. The blast zone will be irradiated for a short time after detonation, giving out up to 5 rads/second.

Slendy’s opinion: Big. Deadly. The definition of overkill. This weapon should ONLY be deployed when facing a garrison of enemy troops or a Super Mutant Behemoth. The ammo is near impossible to find, and it is easy to vaporize ones self as well as your intended target, but when you need a hail Mary play, there is no finer weapon 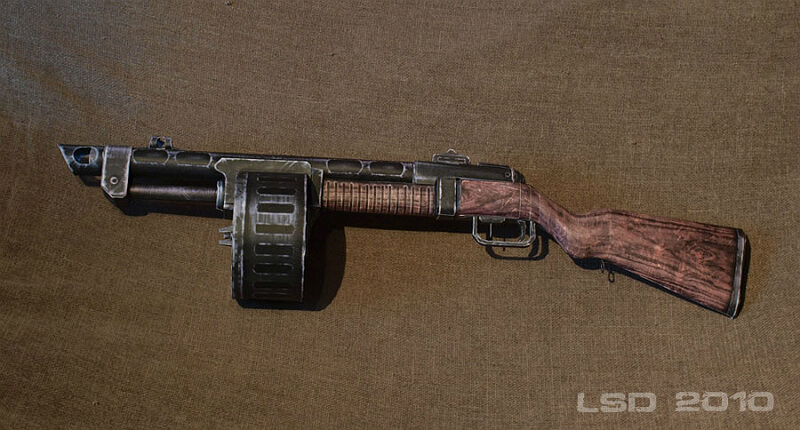 Background: This model of combat shotgun was deployed as a close assault fire team’s primary weapon (supplemented with explosives, an N99 pistol, and a power fist) during the Anchorage Reclamation, and many working units have been scavenged by raiders, slavers, and Talon Company mercs in the Capital Wasteland. Vastly superior to the sawed-off shotgun, the combat shotgun combines a large drum magazine with mutilating close-range damage. The only drawback is the weapon’s poor reliability, as the combat shotgun deteriorates quickly. However, considering it is commonly used by human opponents, and its use in traps, you can usually find enough to keep at least one in fully working order.

Slendy’s opinion: When clearing out a metro station or dusty building, this is the weapon you want by your side. Though not fully automatic like variants found in the Midwest, the mutilating close range damage means you can drop an unarmed target in just a few blasts. A must for any self-respecting player, just keep in mind that it is virtually useless at any range other than a few arms lengths 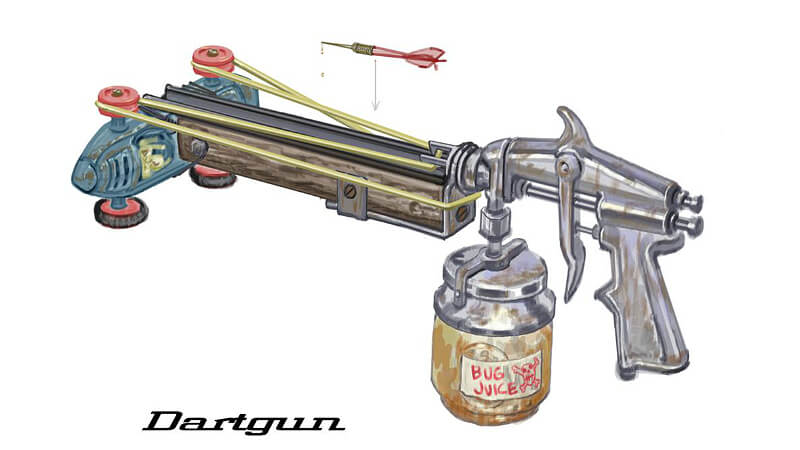 Background: The weapon fires darts that have been dipped in radscorpion venom. A hit anywhere on a target’s body will instantly cripple the legs, making it extremely useful against fast melee opponents such as deathclaws, yao guai, feral ghoul reavers, super mutants, and aliens. Surprisingly, the poison from the dart does affect radscorpions; however, it does not hinder the radscorpion’s speed as dramatically as it does other enemies. After the initial hit, the darts inflict additional poison damage upon the target for 8 seconds unless the target is non-organic, such as a robot, in which case the poison will do no extra damage. The poison damage effects of the dart do stack; more darts in the target at once will cause it to lose health at a faster rate.

Slendy’s opinion: if you want to have a chance at taking on high-level creatures such as Deathclaws, Yao Gui, or Super Mutant Behemoths, it would be in one’s best interests to keep one of these on hand. The leg crippling effects means that a bumrush enemy like a Deathclaw becomes a leisurely kill as it hobbies towards you. The clematis can be costly, but it is well worth your caps

Background: The alien blaster is one of the most powerful weapons in the game because a critical hit is guaranteed. This weapon will often be able to take down any foe with a single shot to the head. This weapon also has the effect of disintegrating any enemy killed with a critical shot by it (which is every shot for creatures weaker than most super mutants), identical to a laser (with the exception that the disintegration effect is colored blue instead of red).

Slendy’s opinion: Overpowered is an understatement. An otherworldly energy weapon, this thing is the polar opposite of the Fat Man, trading massive area-of-effect for precise and surgical deadly force. The only reason this is not top of the list is because the ammo for the blaster is rare and the gun itself cannot be repaired by any wasteland weapon

Background: The Type 93 Chinese assault rifle[1] was designed and manufactured by a Chinese industrial conglomerate for the People’s Liberation Army during the Resource Wars, for the purpose of equipping the Chinese infiltrators and American fifth-columnists. To this end, it was chambered for the abundant 5.56mm round and utilizes a 24-round magazine. Thousands of these weapons were smuggled into the US for use by Chinese operatives and sympathizers on the East Coast, and many remain functional even two hundred years after the Great War. These rifles are also proven to be ready for manufacturing in post-War conditions.

Slendy’s opinion: Coming in close second for top spot, this gun excels at throwing rounds downrange and damage to back it up. Hard to find at low levels, once you venture into Super Mutant held DC, these become much easier to find. Durable, reliable, and easy to find ammo for, this gun is a smart choice for those who enjoy mid-range combat

Background: This weapon is often the very first rifle type firearm the Lone Wanderer can acquire after leaving Vault 101 for the first time. (Although the BB gun is the first rifle to be acquired, the .32 hunting rifle is among the first actual combat rifles that are able to be acquired.) This weapon is very accurate, and has the best zoom of the non-scoped weapons. The standard hunting rifle has spread, unlike the sniper rifle (and the hunting rifle’s unique variant Ol’ Painless). This can make the weapon hard to use for sniping at long ranges without V.A.T.S. A skilled player can use this weapon to great effect in most situations, even close quarters combat inside buildings. As always, it is best to take cover between shots.

Slendy’s opinion: Hands down the best gun you can carry. At low levels, this gun is a life saver, replacement parts being plentiful, ammo almost impossible to run out of due to being chambered with a common .32 caliber round, and a relatively high damage for an early game weapon. At higher levels it is still useful, typically useful for replacing your pistol after you begin to fight tougher enemies that your trusty 10 millimeters can no longer handle. This weapon is something that you need to have on you at all times, at any level