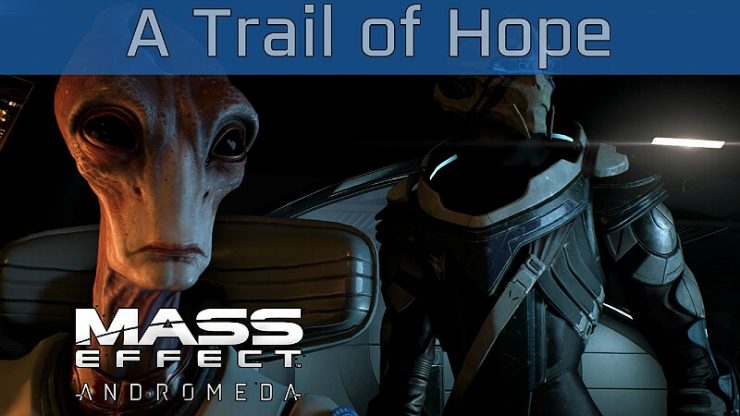 Just finished A Trail of Hope. ME:A really needed more missions like this up front.

As the title says, I just finished going through A Trail of Hope. Up until the final raid on Voeld, I was sort of meandering through Mass Effect: Andromeda. Some of the character stuff was good, the combat was usually fun, and the quests and side-quests varied from relatively interesting or thought-out to just okay. Eos, Voeld, and Havarl were all decent planets, and the new races were nice but really didn’t have anything distinct about them. So far, this is probably my biggest criticism of ME:A, everything is just ‘nice.’ There’s nothing that makes the Angara in particular stand out. The Milky Way races all had defining characteristics that were then played with and deconstructed in order to make interesting dynamics, the Angara just seemed to have a variety of traits without any real throughline. The Kett are vaguely religious, generic rock villains. Even Ryder was kind of same-y, always having a plucky go-lucky attitude about everything and the player is rarely offered chances to make serious choices with strict distinctions in personality.

So, enter Rescue the Moshae. A genuinely well-done priority quest, offering some fun combat scenarios, but more importantly, defining the world. The Kett’s religious aspect is no longer flavour text, it’s big and cult-like and unnerving. The genetic manipulation angle on the Kett gives them an actual personality, and so far seems to be tackled with more intrigue than that of the Reapers or Collectors. There’s a greater emphasis on the psychological horror aspect that wasn’t super played up in the original trilogy. More than that, both the Kett revelation and the presence of the Moshae herself gives the Angara more personality. Their war with the Kett now has a fresh, unique angle to it. The Moshae shapes and ties together the vaguely spiritual threads the Angara already had. This quest served to make both races much more unique and interesting than they were previously.

More importantly, this quest shaped the Tempest crew. Ryder is able to make his/her first real choice, and I legit had to sit back and debate for a few minutes whether I wanted to blow the facility or rescue those inside. There’s two very different leadership styles at work there. Not to mention Ryder’s responses to the Cardinal finally allowed him/her to be less of a generic boyscout. Lastly, the crew’s reactions to the events seem to be fairly varied and dynamic, revealing a lot about their individual characters.

Sadly, this mission came way too late in the proper ‘campaign’ of the game. Things shouldn’t have to wait three full planets to actually get dynamic and interesting. I think if more events like this one were scattered through the first few worlds of ME:A, it would be a lot more interesting overall. The Kett bases on Eos and Voeld have a few traces about genetic manipulation, but none of the borderline cult-like imagery on display. Better playing up those elements would have made them a more interesting villain. As for the Angara, ME:A really just needs to pick an angle. The Turians were Roman and militaristic, the Asari were rooted more in Greek philosophy and sensuality. Etc., etc., and then after those elements were well-rooted, the games were able to add twists to them. The Angara are just a bit of everything. They’re emotional and pseudo-religious, they have a Resistance and rebel forces, they have a focus on history… but none of it really clicks together in a satisfying way.

All that is to say, when this game works, it really works, but getting there is a mess. If there were more Priority missions like this, I think it would have stuck the landing a lot better.