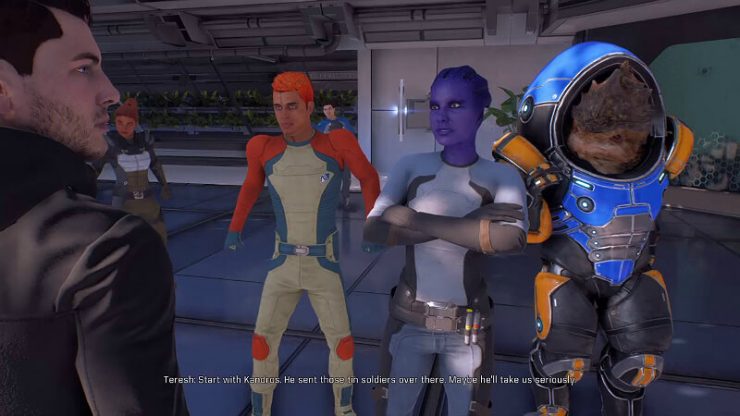 Considering this happens early in the game, I marked it as no spoilers. However, if you have not come back from establishing the first outpost on Eos, you might want to skip this.

So, I’m taking my time with my second playthrough. One of the most annoying interactions in the game (for me) is the little mini-quest dealing with protesters taking over hydroponics on the Nexus.

Of the options given, I have ended the protest both times (peacefully) and not thawed out any of the whiney cunts families. Why? Because they’re whiney cunts. This is one of the few times I miss the renegade/paragon interrupts. I really want to put them in their place, but it just ends up being,” do you think your mom would like you exiled or dead?” Feels like such a weak end for it.

Now, if there was an interrupt, this is how I would like it to go. (Feel free to give feedback on it, it’s just a basic gist)

R: Okay, okay. I’ll tell them to wake up your families.

P1: Oh thank you. We knew we could count on you.

R: If I just wake up your families, more people will protest. I can’t refuse to wake up their families, considering I just woke up yours. It could spark another riot, endanger the Nexus. So I’ll have to wake up everyone. That’s… uh, another 180,000* or so people.

R: I’m not finished. Now, we’ll need everyone to cut back on supply usage. I’m not an expert, but increasing the people awake will make it so we have to ration supplies. Food will be scarce with that many people, so probably only one meal a week, and that will end up being a tenth of the portion for a meal. Probably less, but I don’t know exactly what amount. Same will go for water, but we’ll have to forego using it for unnecessary things, like bathing. Air will need to be rationed as well, I mean, even air is a finite resource here. You know that since you threatened hydroponics.

R: I’m not finished. So, we’ll have to ration pretty much everything. Even space. Sleeping will be a nightmare with everyone crammed into the little space we have here, or even the outpost.

P1: We just want to see our families, we didn’t think about it like this.

R: Don’t worry, I’m going to tell Tann to wake everyone. Just for you. You’ll see your families. Everyone will. Then they’ll starve to death, or suffocate, or die of exhaustion or disease, or maybe die from trying to survive on a planet we don’t have ready for more people. The whole initiative will fail, but you’ll get to see your families just before it does.

R: So, if you all still want me to wake everyone up, let’s go march into Tann’s office. Who’s coming?

Protesters, angry and demoralized, walk off. Crowd disperses. The security officer comes over.

SO: I thought a Pathfinder would handle this better.

(New dialogue selection to end on)