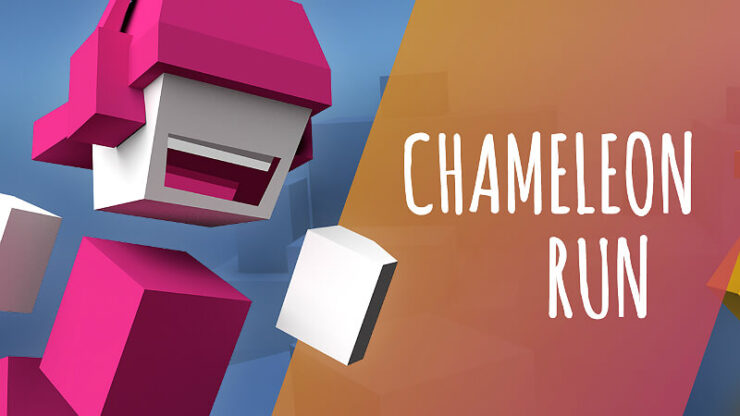 Chameleon Run is significantly different from its counterparts on Android offering primarily original, exciting gameplay and positioned as a dynamic, crazy arcade game with an unusual use of color. You have to control an incredibly fast character running nonstop from left to right. The control is simple and clear and is carried out by two buttons.

The main feature of the game is to change colors. From the initial to the finish point of the route the path of the hero will take place on multi-colored platforms. And it is very important that the color of the character coincides with the color of the surface of the platform on which he moves or is going to jump.

The moment when you step on the track of a different color, you lose, so do not forget about this. Just need to add that the track consists of steps which are not especially stable. So you need to be careful because near the edges of the steps is the abyss, where you can fall. The additional complexity of the game is given by the fact that the speed of running is constantly growing, so you do not have time to plan, having to move as quickly as possible otherwise you just fall into the abyss and instantly lose.

The control of the game is simple, the character runs by himself, you can only make jumps, though the jump can be as simple and enhanced when you move to a longer distance. Strengthening your jump is constantly necessary because often the steps are at a distance that cannot be overcome in the usual way. But it is important not to overdo it, because if you make an enhanced jump in the normal state, you may well fly over the step and fall into the abyss on the other side of it.