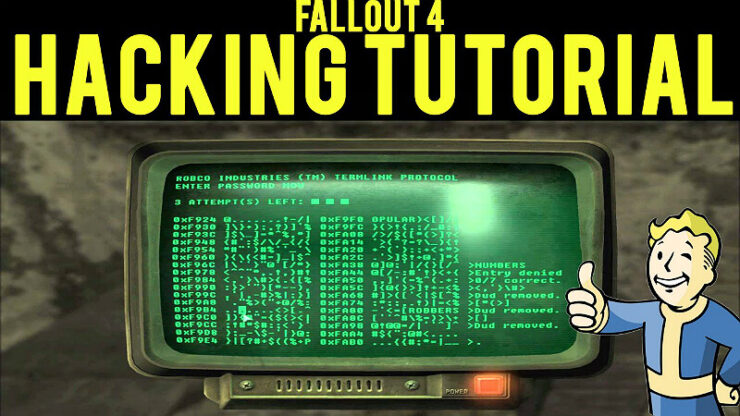 Hacking can seem like a daunting task when a player is greeted by the game’s wall of text, but once the rules are clear, it can be an enjoyable little game of hangman. This post aims to simply explain the hacking process, and to encourage people to try it, rather than ignoring terminals, making companions always do the dirty work, or, god forbid, installing mods that ruin the game.

How To Play Effectively

The game is based around using deductive reasoning to guess the correct password. Conclusions are based on two fundamental rules:

The first one is easy, but the second one is often misunderstood or overlooked, and is best understood with an example:

The game give you three words: having, dicing, and moving. You select having and the game tells you 4 correct. Your job is to figure out which 4 they are! Next you try dicing and the game says 3 correct, which you might have expected since they all end in ing, but from this information we can deduce that the character in the third position must be a v. The only other word that meets this condition is moving and is the correct answer. Now this is an oversimplified example of course, so let’s move to a harder example.

Here is a further breakdown of our guesses vs the correct answer:

If we had put more points into luck we would have chosen abasing as our second guess*. Hopefully that is a good explanation that helps you to understand the process of elimination better. 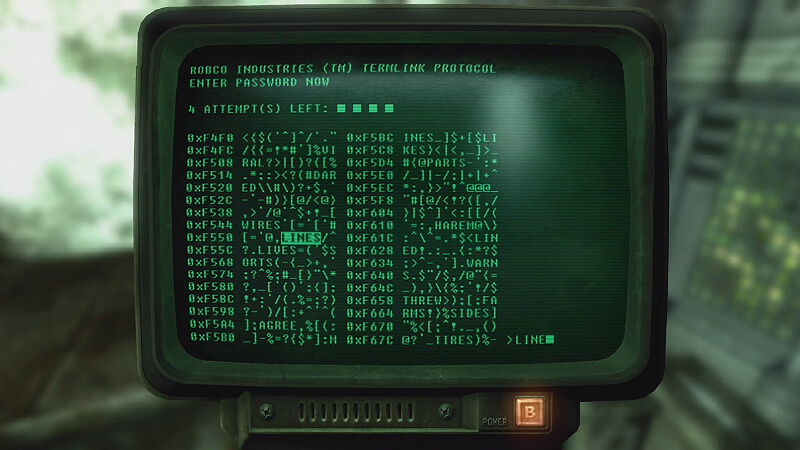 The above example works out perfectly (uncannily so!) but the game will throw you some curve balls to discourage blind guessing. For example, what if the word amazing was on the list? Then you would have a 50/50 chance of selecting the right answer because “amazing” meets all the same criteria as “abasing” based on our previous three guesses! That’s where the filler symbols come in. Some lines are filled with nonsense punctuation characters, but they aren’t useless. Hidden in those characters are special sequences that will help you solve the puzzle. There are three rules for finding them:

That’s is. To illustrate though, let us assume there is a line that looks like this:

Can you spot it? There are two of them actually: <[email protected]$#&?> and {}. Mouse over them (or the console equivalent) in-game and they will light up like the guess words do. Selecting these sequences will do one of two things:

How convenient! We were stuck between guessing abasing or amazing, so we found some magical symbols and now the word amazing was removed because it’s a dud! We can now solve the puzzle with confidence. Even better would be if our tries were reset, but the chances of that happening are very slim and usually don’t happen very often so don’t count on it happening! 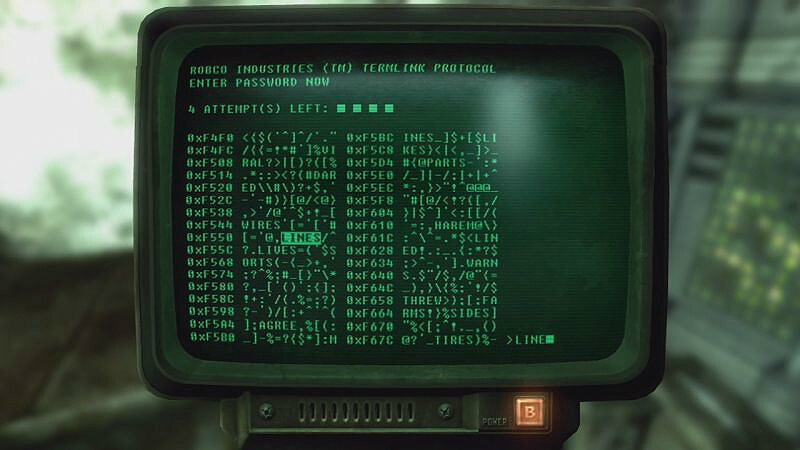 There are a number of ways to approach these puzzles so here are some stratagems that I use:

And that’s about it. Hopefully this post was informative enough to inspire people to at least try hacking out, even if at first it seemed scary and confusing.

Note: This was a joke. The Intelligence stat actually does affect hacking though.

GTAmes
All maps for all Fallout 4 perk magazines