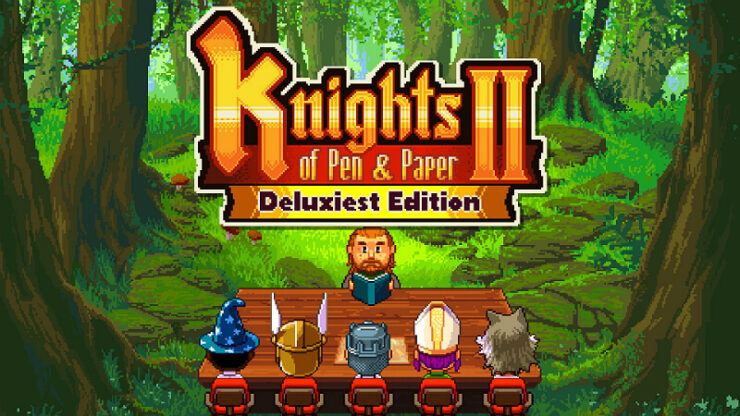 Knights of Pen and Paper 2 – will take you to the fairy pixel world where improbable adventures, a set of dangerous monsters and even more hidden treasures are waiting for you. Gather your team of the best heroes who are ready to go to the edge of the world for good profit and fight the biggest monsters. In this game, there are intertwined ancient beliefs, magic, a lot of strong monsters and the ability to craft the most unusual items. You have two choices – to become a good master of your team or go to the dark side.

The gameplay is not standard. You will not explore mountains, dungeons, and similar caves. Instead, the characters sit at a cozy round table. The host will tell them fascinating stories and introduce all the characters of the board role-playing game.

Before you go on a trip, you choose a class, as well as a specialization which will be based on your character. The most interesting thing is that the game has a huge number of different specialties, ranging from simple programmers, office workers and ending with sellers in stores. The choice must be made carefully, as it affects the further bonus that you can use during gameplay. Also, do not forget that the character class affects the style of play and used spells, weapons and more.

While the players will sit at the table, their characters will move through the forests, villages and other locations that can be seen in any role-playing game. All battles will take place in a step-by-step format. As expected, you will be able to choose a certain action that can be performed at the time of your move. When you win, you will receive money that can be spent on the purchase of weapons, equipment, and useful items with which you can restore health, as well as strengthen the attack to our heroes.

Knights of Pen & Paper 2 on Android – a good game with nice graphics, fun gameplay, and a long enough story that will take you to a variety of habitats of mysterious creatures.