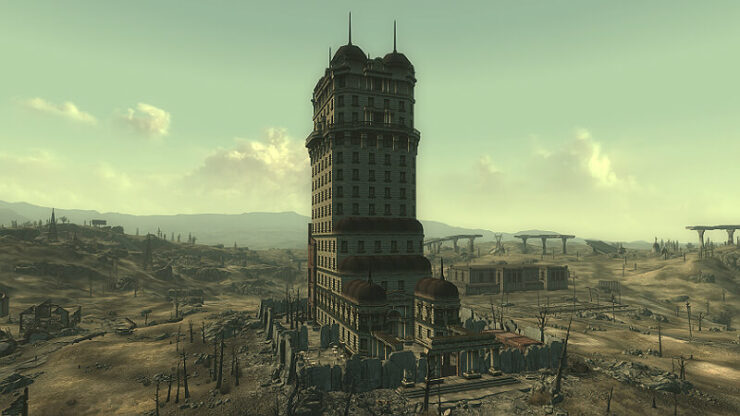 I think Tenpenny Tower is one the most, if not the most, interesting and underappreciated quests of Fallout 3.

I remember playing it when Fallout 3 first came out. Having not been exposed to the earlier Fallout games, or any other RPG, I wasn’t really aware of the moral ambiguities. The quest from the onset seems straight forward. Murder innocent ghouls for racist humans or peacefully overthrow a post-apocalyptic apartheid by getting the human tenants on your side and let the ghouls in.

I remember feeling pretty good achieving the peaceful resolution, and as I remember most of the humans inside Tenpenny Tower seemed cheerful about it too and I got a ghoul mask. Yet going back a few in-game days later and finding the entire Tower’s tenants murdered and piled up in the basement I was horrified. I had thought I made the “good” choice, yet everyone, even the humans friendly to ghouls were dead. It was a really sobering moment. What made it even more interesting is that when I killed Roy Philips for it, I still lost karma. The game still classified him as having good karma despite him being a mass murderer.

I genuinely think this was one of the most well written quests, if not the most well written quest of Fallout 3 (excluding the Pitt). A lot of people didn’t like it as the good choice wasn’t really that much of a good choice after all, as if they had been tricked into siding with the ghouls. Another reason I think some people had problems with it is because by killing the ghouls, which could arguably be a lesser evil, the player doesn’t receive the Ghoul Mask.

I think this may have been intentional on Bethesda’s part to force players to think really hard on who they would side with. Murder the ghouls and keep the likable & well meaning humans alive (though be hated by them and Three Dog for being a murdering bigot), or indirectly murder all the tenants and get a handy mask.

GTAmes
Fallout 3 – The Legend of the Republic of Dave