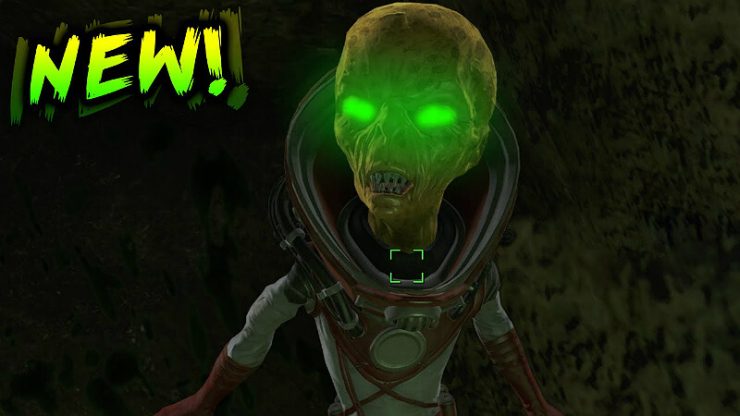 Am I the only one who is disappointed that this alien spaceship comes crashing down from space, the alien limps off injured to a cave, you track it down, kill it, take its incredibly weaponry and then…. nothing????

Even your companion, who is with you at the time and sees it crashing with you, will just say ‘Something just fell out of the sky!’ ONCE and never comment on it again. Even when you find the crash site, they say jackshitall. They say nothing!!! It’s a crashed alien space ship!!!! You should be losing your friggin S H I T right now, Cait!! Not lighting up a ♥♥♥♥ing cigarette!!! (also why does she light a cigarette, then throw it away immediately, then light another immediately, sometimes? what a waste of cigarettes)

There are even quests themed around ancient alien visitors, shaping our history, but the NPC and my player character do not correlate on any findings together, my PC can not tell him, hey i actually found a downed alien space ship, hey i got an alien weapon right here in my backpack…. no, nothing…..

Your dialogue choices, 15 minutes after watching the ship crash hunting the alien and taking its weaponry are:

Ancient aliens huh? That’s a neat theory.
Don’t be crazy. That’s not real.
Aliens, huh?
Do you have any proof?

That’s ridiculous. Dying light did the exact same thing. I started a quest in that game to construct a weapon, it had all these reptilian themes in the quest, all these alien manipulator themes in the quest and then when you construct the weapon and complete the quest…. u just have this useless lame weapon. The story never unfolds, the quest never evolves.

AM I THE ONLY ONE WHO THINKS THESE ALIEN SUBQUESTS NEED MORE FLESHING OUT??? ALIENS ARE KIND OF A BIG DEAL IN MY EYES!!

I know they were fleshed out in the mothership DLC for Fallout 3. There was much about them in Fallout 3. But in Fallout 4 it seems like a whole new game is starting when that thing crashes and it just NEVER gets explored upon by the devs.

Maybe another Mothership DLC is coming for fallout 4? Wouldn’t surprise me.

But my real gripe here is the lack of NPC reaction, the lack of real OMG and it being a big deal, as it should have and should be.