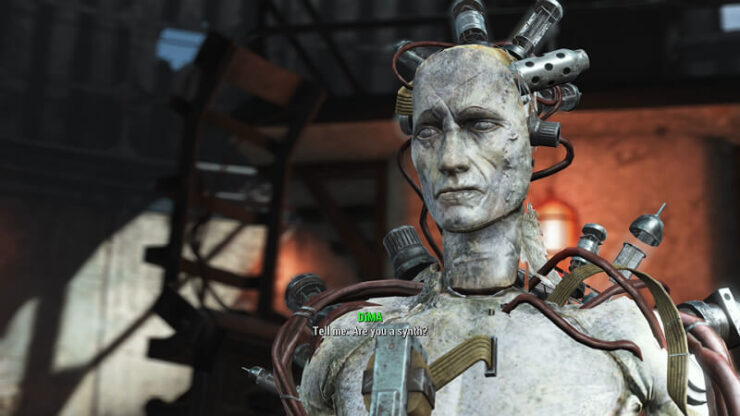 Here comes my theory that the Sole Survivor is a synth, and is this the wrong place to post it or what?

Doctor Li is recruited by the Institute after Fallout 3 and tells their leader about a remarkable person who literally solved every problem in the Capital Wasteland and they come up with a plan to recreate those conditions.

They send a team of people to retrieve your corpse and pull the freshest memories from your brain (just the day the bombs fell, nothing else) and add a little staged scene with Kellogg. They put a bullet in your frozen partner’s brain, remove the baby corpse, and “unfreeze” you with a series of breadcrumbs in place to find your missing family member, just like the Lone Wanderer did. Sure enough, you go off fixing the problems of the Commonwealth.

When you arrive in the Institute, Father tells you he’s your kid, and he wanted to see what kind of person you’d become. Really, you’re just the next generation above courser, but only Doctor Li and Father know the truth. If you back the BoS, she’s the only one you tell, and she doesn’t rat you out because once she knows the experiment was actually a failure, she’s ready to abandon the sinking ship.

But what about Kellogg, he thinks Father’s your kid, right? Well, we know his memories were all in what amounts to an biological external HDD (“he had this thing attached to his head”) and that the Institute kept doing upgrades to him. All his shit was programmed in as well, he only remembers going to the pod, not that it was staged. They were tired of this guy, maybe because he couldn’t be sustained, maybe because his free will made him difficult to control, so they set him against you to see who’d come out on top. Killing Kellogg and arriving at the Institute were the preconditions for success, and once you get there, you continue right where he left off. You’re the new guy on the outside.

Maybe that’s why Fallout 4 has fewer choices than people wanted, because your character doesn’t have free will.