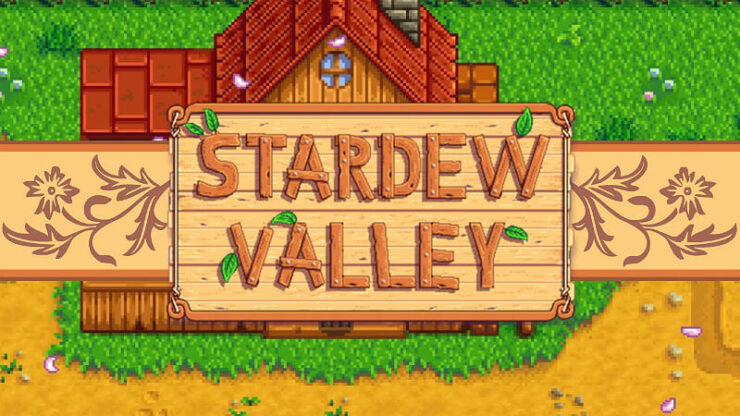 Guys which tool is best to upgrade first? I thought in terms of accessing new areas and progressing into the game or getting big enough profit to do so. I’m soon up to 2000g and can get a copper tool or fishing rod.

In terms of tools, the watering can is probably the highest priority because it will save you the most energy every single day. You can have a bigger field of crops, and still have energy for mining or fishing. But, you also need it nearly every day, so it’s not trivial to just send it away for a while.

If you get lucky and you get a rainy day soon after you have five copper bars, I’d do the watering can first, turning it in the day before it rains, but after you’ve watered your crops.

If you don’t get a rainy day relatively soon after you have copper bars, upgrade your axe, unless you do a lot of mining, and then consider the pick instead. Even if you don’t get a convenient rainstorm, send in your watering can on the 27th after you’ve watered and at least you’ll have it for summer.

The fishing rod isn’t super important early on. You can catch most of the normal spring fish easily on the bamboo pole.

Personally, though, the first thing I always get is the first backpack. 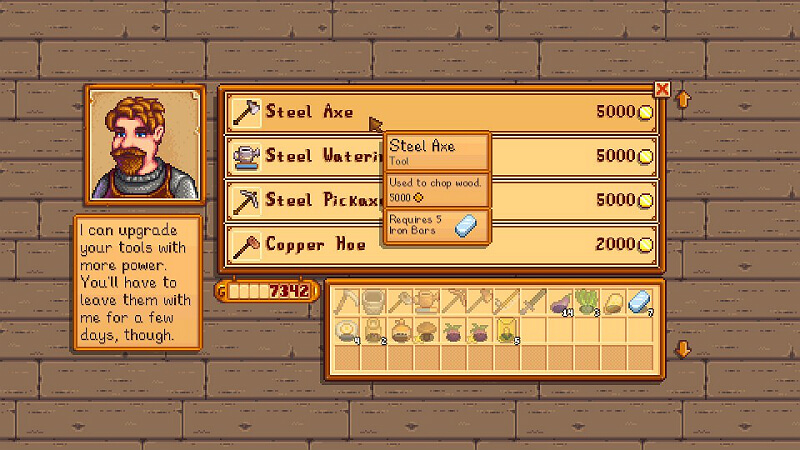 I’m still in my first year, but you’ll need a Silver Axe in order to get to one small area, and a Silver Pickaxe to get to another minor one. Neither of these has been mandatory far, so I wouldn’t get frantic about leveling either as quickly as possible if it’s not helpful to you.

A lot of what to upgrade first just depends on how you want to play the game. The Pickaxe is also useful for mining faster (either for gathering or just exploring faster while using less energy).

The watering can is great if you want to focus on crops. Depending how far you go in the mines, you can start making your own sprinklers with the ore you gather, which will make upgrading the watering can beyond copper seem pointless (at least based on my own experience).

I got the first fishing rod upgrade, which is worthwhile for the bait – but that again depends how much fishing you plan to do.

I have never upgraded the hoe. I don’t see a point to it, but maybe I’m just not far enough yet. I upgraded the axe to get rid of certain stumps (and also to get into that side area I mentioned before), but it hasn’t really been that important. You just chop down trees faster, which is only good if you want wood faster for buildings. 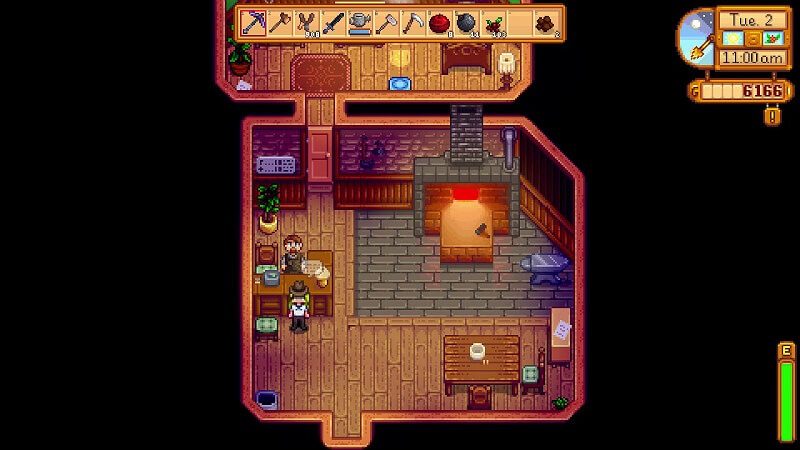 My opinion seems to be pretty unpopular but I prioritized the pickaxe over everything else. using the pickaxe in the mines allows you to get sprinklers which make the watering can completely obsolete. A more efficient pickaxe means more gems and ore per run which means more sprinklers, etc.

That being said, you could also make enough money to just buy the materials for the sprinklers from Clint (except for quartz for adv. sprinkler, and iridium for iridium sprinkler). So it’s really up to you. Sprinklers are overpowered as hell and make your life so much easier rather than having to water everything every morning.

My upgrade Priority is Pickaxe > watering can > axe > hoe

The reasoning being is the pickaxe makes it easier to get more metal for future upgrades, The watering can is your biggest energy use early on, And I do the axe over the hoe because you only use the hoe once a season typically where as I use the axe at least every other day.