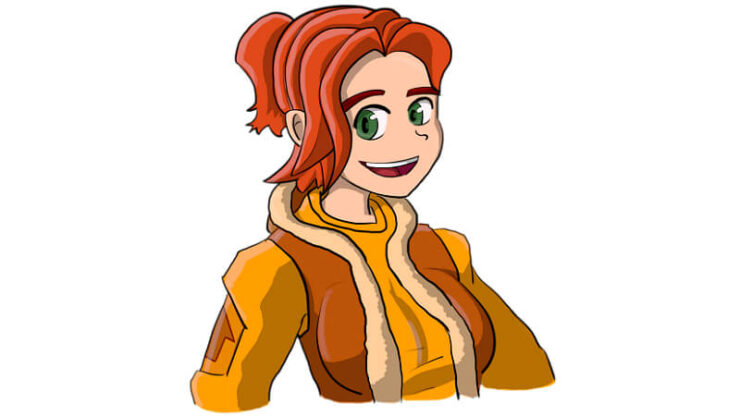 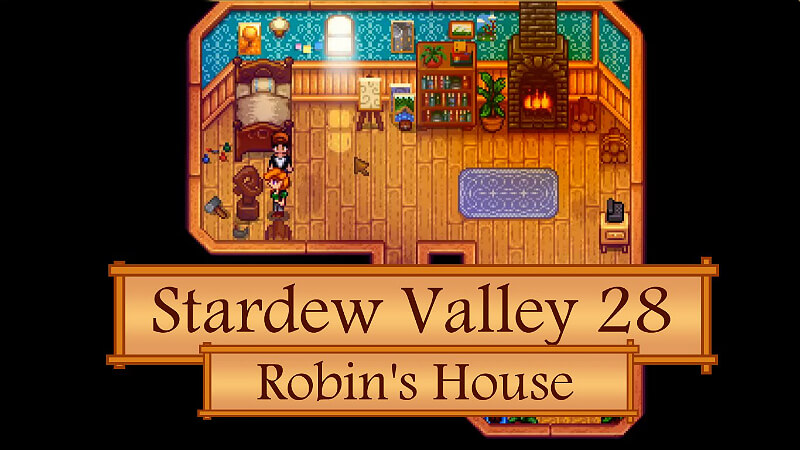 Categorically, you would agree with us that Stardew Valley has moved from just a farm game to a perfect representation of our day to day lives via farming. The Stardew Valley Community entails every aspect from the sharing of recipes by villagers (friends) to the actual farming season. This intriguing game, in turn, gives you that feeling of belonging and association as you mingle with other villagers. In Stardew Valley, an easy way of making friends is by sharing gifts. Celebrate the birthdays of your fellow villagers by giving them a gift which will further strengthen your friendship.

Stardew Valley is one place you would want to spend some time (if not all the days of your life) because it exudes so much peace and serenity. Although it is widely known for its fertile land which boosts farming, woods can also be used from diverse trees in building houses. These additional buildings help to house your equipment and supplies for a more productive season – this is where Stardew Valley’s Robin comes into the picture.

The game starts with Mayor Lewis sending Robin, the Stardew Valley carpenter over to usher you into the community. Robin is a productive and hardworking woman who doubles as a mother and a skilled carpenter. She is the current wife of Demetrius, whom she bore a daughter named Maru. She had even gotten married earlier before meeting Demetrius. That union gave birth to her first child and son, Sebastian. However, the game didn’t delve into Robin’s first marriage. Stardew Valley’s Robin location is at 24, Mountain Road.

It was very easy to come to this conclusion, especially with the two books which can be seen on the bookshelf located at the corner of their room. It is titled “Maximizing Your Second Marriage” and “Practical Tips for First-Time Step-Dads.” 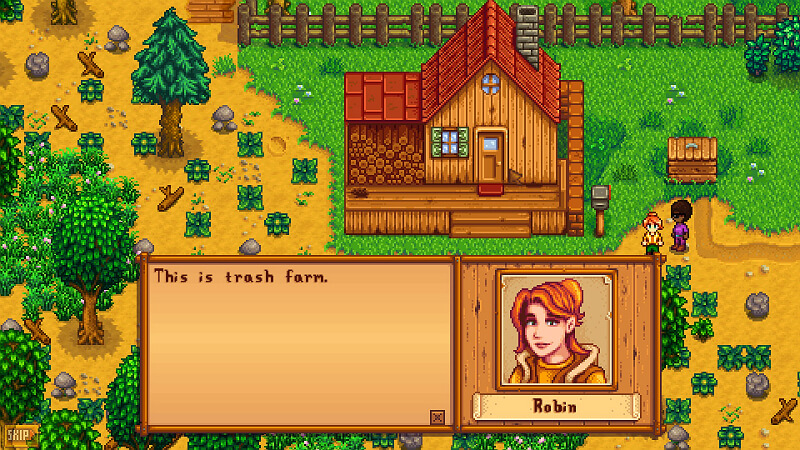 To begin with, Stardew’s Robin is not the social type since you would see her in the shop from 9:00 am to 5:00 pm. This is to tell you how hard working she is. Tuesdays are mainly for exercise at Caroline’s. Robin engages herself in an exercise session with Jodi, Caroline, Emily, and Marnie. Notwithstanding, she and her husband Demetrius visit the saloon on Fridays (4:00 pm). She stays at home on a rainy day, and her schedule differs with the diverse changes that come with each season.

Often when work gets tedious and hectic, Robin takes a walk up the mountainside which is situated just at the corner of where she lives at exactly 5:00 pm when she closes her shop. Additionally, once it is 9:00 pm, she automatically abandons whatever she’s doing and retires to bed.

However, Robin also takes good care of herself and her family. She ensures she goes for a regular checkup which comes up at every 18th of Summer. Here, the Doctor will ask her about her health, and she will reply with an affirmative. The community of Stardew Valley has a clinic which foresees the wellbeing of the villagers. Additionally, Robin remains committed to a job when hired. Her shop will remain closed until she completes that job. 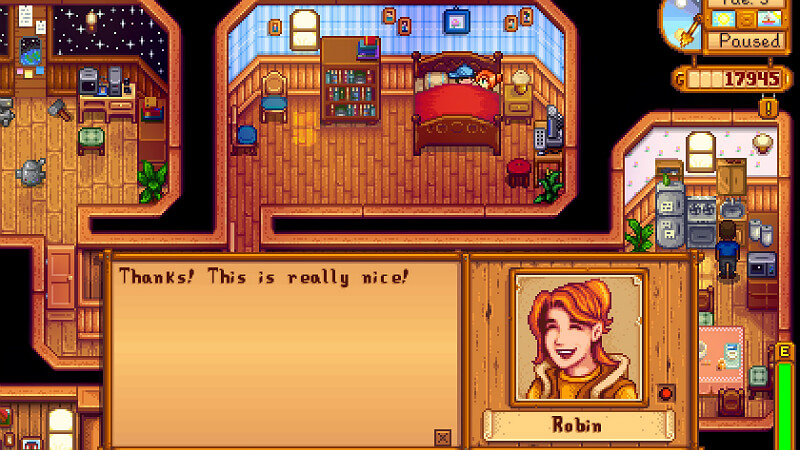 Planning on giving Robin a gift?

Then there is the list of Stardew Valley Gift Guide she cherishes; Spaghetti, Goat Cheese, Quartz, Hardwood, Milk, Fruits, Universal Likes, and mostly Loves. Robin reciprocates by giving you something back in return. Also, she dislikes Wild Horseradish, Holly, and Universal Hate or Dislike.

Endeavor to pass her a gift at least twice a week, and you will both become friends quickly. Be sure to remember her birthday which happens to be on the 21st of Fall. 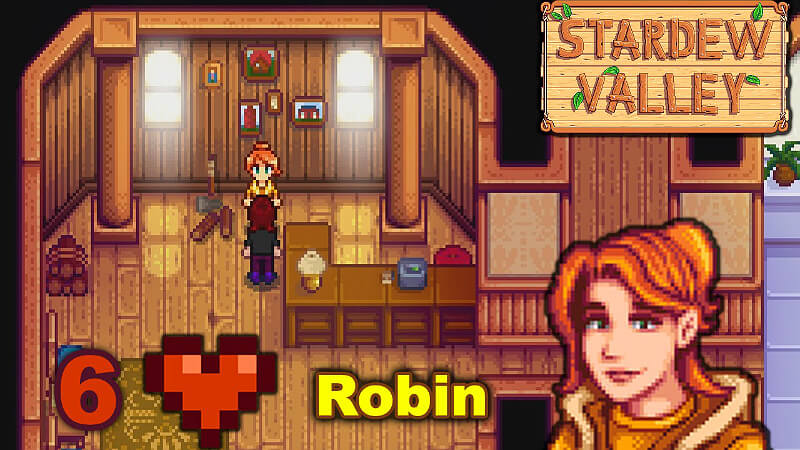 The more the level of friendship you share with Robin, the more gifts she dishes out to you. Robin is designed as a non-playable character that gives out gifts even with your low friendship points. There are two types of Stardew Valley Heart Events associated with Robin, and they are the 6 hearts and the 7 hearts events.

The 6 hearts event entails a scene where you’re chatting with Robin about wood items while she’s cleaning a saw in her home. After which she will give you a gift of Flute Block with Drum Block which is her innermost carpentry secrets.

The 7 hearts event includes Robin sending you mail for a Pumpkin Soup recipe. Her grandmother once used this recipe in preparing a very delicious dish. 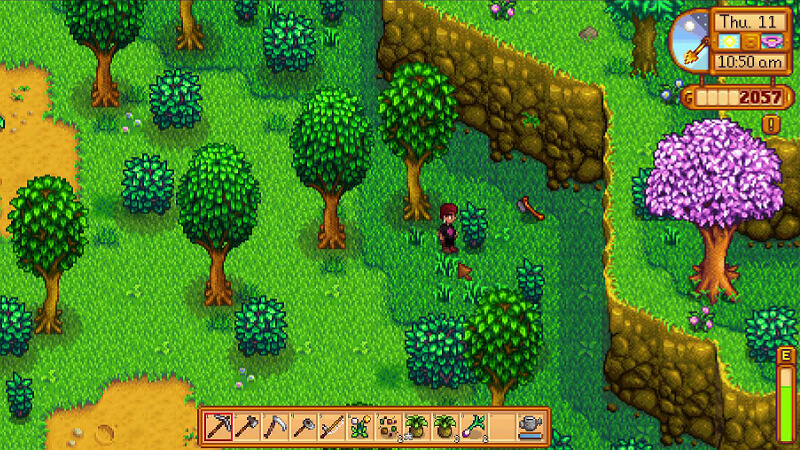 This entails two intriguing quests.  The first quest requires you to find her missing axe.  Robin’s missing axe had always triggered a lot of questions about this Stardew Valley game. Thus, it became the first quest which is called “Robin’s Lost Axe.” This quest begins when you’ve successfully gotten Robin’s letter about the lost axe. Its rewards are 250 in gold and a friendship heart. Her axe can be found south of your farm in Cindersap Forest, just at the right of the sewer.

During this game, Robin will send you a different letter on the 21st of Winter. What she wants in this letter is for you to help her deliver 10 pieces of good hardwood with a reward of 400 in gold and a friendship heart.

Other little quests include helping her get a Stone or Wood. At General Store, she would post a “Help List” of various items. Each item brought is equivalent to 8 times its value plus an additional 150 friendship points. Being friends with Robin is highly beneficial as she remains an NPC for you to run to whenever you need a makeover with your building.