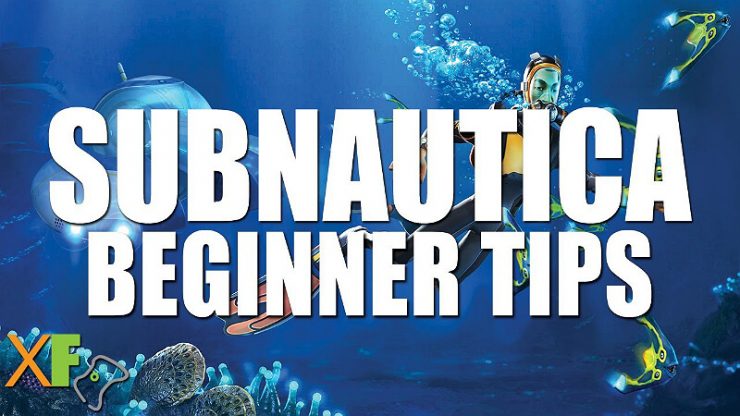 Tip #1: In one of your Seamoth/Exosuit Storage Modules, pack the following:

This will ensure your safety when exploring far away from your habitat. You’ll also have some extra slots leftover in your storage, recommended for storing small tools or 1 large tool (eg Propulsion Cannon).

Tip #2: Always carry a Beacon in your inventory while exploring large areas, particularly new ones. When you see a place of interest to further investigate then you’ll know where it is for later.

Tip #3: Have no space for your Exterior Growbeds? Or just don’t know where to put them? Exterior Growbeds can be placed on top of Moonpools, Observatories and Multipurpose Rooms. Use these areas to utilise your space.

Tip #4: Creepvine Seed Clusters and Blood Oil can be planted in the Alien Containment Unit. Use this to maximise your space.

Tip #5: Fully charged Batteries and Power Cells in chargers will not drain power from your Habitat/Cyclops. Place them in their respective chargers to maximise your storage.

Tip #6: Can’t find the entrance to the Lava biome? Follow Lifepod 2’s beacon. The area its located in leads directly to it.

Tip #8: Interior Growbeds can be placed inside Observatory rooms but personally I believe it’s better to place pot plants inside of it as it utilises the space more and looks more pretty. It also allows more fauna to grow inside than one growbed does.

Tip #9: The interior and exterior lights on your Cyclops will not drain power. Leave them on when you really need to see what you’re doing.

Tip #10: The Stasis Rifle is best used against leviathan class predators. Use this tool for protection when exploring around the Aurora or Crater’s Edge. It’ll also give you the opportunity to scan them if you stun them long enough.

Tip #11: You might be lucky to find a few Batteries and Power Cells in Containers around the Aurora early in the game. You can attempt this to save you resources early on but be advised that you will be exposed to radiation if you go too close to the hull. The chances of finding Batteries in Containers is much higher than finding Power Cells in them.

Tip #12: An efficient way of crafting batteries is to craft a Repair Tool.

Because Silicon Rubber and Cave Sulfur are renewable and Titanium is substantial, you can craft the Repair Tool and then take the battery out of it.

Tip #14: With 10 seconds of oxygen remaining, the maximum depth in which you can successfully ascend to the surface for oxygen is around 180m, achieved with a Seaglide and Fins. Despite this, it is recommended you keep the limit 150m, especially in Hardcore mode.

Tip #18: Oculus’ are the most efficient power source for the Bioreactor.

Tip #19: Construct Wall Lockers on your Cyclops, especially on the bottom floor next to the ladder. Utilising your Cyclops’ space will help your mobility and long journeys.

Tip #20: Your Seamoth/Exosuit can act as a Power Cell charger. Simply dock your vehicle in the Moonpool and switch Power Cells. They will also recharge quicker.

Tip #21: It is possible to dock your Exosuit into the Moonpool without power. Swim behind it and push up against its thrusters. The force you apply should be enough to push it in and be docked. This is especially useful if you want to recharge 2 drained Power Cells and you don’t have a charger.

Tip #22: Camera Drones can also act as Beacons. Use this to your advantage and place them in areas you want to visit. It is also good for tracking Stalkers since they will steal the Camera Drones from your Scanner Room and take them to their pile, where there’s also a possibility for some Metal Salvage to be.

Tip #23: If a lot of Lava Larvae are attached to your Cyclops and its not safe to disembark, use the Cyclops Shield Generator to clear all of them off. This process will cost 4% power on regular Power Cells.

Tip #24: Shale Outcrops respawn. They do so in the Sea Treader Migration Paths. Sea Treaders will bring them up from the surface with their feet, during which the outcrops will slowly sink back down into the sea floor unless broken. This makes Gold, Lithium and Diamond renewable resources. Place a beacon at any Sea Treader Migration Path you come across; look for the cracked floor and listen for the PDA announcement.

Tip #25: It is not possible to explore on the Aurora before it implodes because it uses a separate, inexplorable model.

Tip #26: Toss Flares in Wrecks and Lifepods you’ve already searched to save you wasting time. Careful they don’t glitch through the ground.

Tip #27: Wanna swim with your fishies? Plant Brain Corals in your Alien Containment Unit to continue ingesting oxygen whilst inside.

Tip #28: On rare occasions, hatched eggs in the Alien Containment Unit can be salvaged as Table Coral Samples. This could be a glitch but its good to check.

Tip #29: When your hunger is at 99%, eat the highest valued food you have accessible to you (eg a Cooked/Cured Reginald or a Nutrient Block). Your hunger level will surpass 100%. This does not apply to your fluid intake.

Tip #30: Plants do not require power to grow. Use this fact to your advantage for when your base or Cyclops is needing power.

Tip #31: Alien Containment Units can be extended by building another Multipurpose Room on top of the one your unit is currently in and constructing another unit inside of it. It will also increase the amount of fish that can be bred inside the unit; remembering each unit built hosts up to 10 fish so another unit will boost it to 20.

Tip #32: The maximum amount of Metal Salvage a Stalker will take to its pile is 3. Use this knowledge when farming for Stalker Teeth. I think Camera Drones count towards this value as well.

Tip #33: First Aid Kit Fabricators do not consume power. This is why it is very useful to have one built on your Cyclops or habitat. It doesn’t hurt to have 2.

Tip #34: When being chased by a Reaper Leviathan in your Seamoth/Exosuit, look for a cave network or wreck to hide under and safely repair it.

Tip #35: Ghost Leviathans in the Crater’s Edge will not emerge or disappear if you are standing in an Observatory built there since, according to the game info, the Observatory is identified as a biome (and thus the reason the music changes).

Tip #36: The bedrock of the planet can be seen at a depth of around 3,000m. Despite this, the maximum depth possible to reach in the game is around 8,500m after which you will fall from the sky into the water below.

Tip #37: The best place to find the Moonpool fragments is the Mushroom Forest near the Aurora.

Tip #38: Colour your vehicle and habitat beacons yellow, they will stick out more when searching for them in the water.

Tip #40: When being chased by a Warper, move left and right frequently while swimming to have a better chance at avoiding their projectiles.

Tip #42: There is nothing up the ladder on the right side of the Aurora’s cargo bay. Don’t waste your time trying to get up there.

Tip #43: If you don’t have a Thermoblade, it is possible to cook fish using the Propulsion Cannon. Simply grab one with it and hold it over a thermal vent until it erupts.

Tip #44: The Exosuit arm is the strongest weapon against predators. Use this to kill them quicker.

Tip #45: Pressing F6 will disable the HUD. Pressing it a few more times will hide the player model and beacons. This is useful for screenshots.

Tip #46: Seeking fluid intake? Cut a Bublo Tree and eat its sample straightaway. It will provide

Alternatively, you can use Tip #47.

Tip #47: Eyeyes and Red Eyeyes have no downside when consuming raw. Use this for when you’re seeking food desperately without a Thermoblade. Cooked Eyeyes, however, are great for both values, providing

Tip #48: Looking for Peepers? Find the Reefback Leviathans. They’re usually swimming behind them in groups of 3-4, also with a bunch of Bladderfish, Holefish, and Boomerangs.

Tip #49: Consuming a raw Bladderfish will restore 15 oxygen. It may be wise to carry one on you when exploring cave systems and deep areas.

Tip #51: The Blood Kelp Zone is the best biome to salvage Quartz. There’s enough Quartz in that one biome to create up to 200 Alien Containment Units.

Tip #52: If you’re swimming near your Cyclops in the Lava biome and a Sea Dragon Leviathan is aggressive, swim away from your Cyclops immediately. Its fireballs are strong enough push the Cyclops and you will take critical damage if your Cyclops hits you.

This happened with me recently and I lost 90% health after it rammed into me, with a Reinforced Diving Suit equipped.

More to come… I hope at least one of these helped you! Also let me know if any of these no longer work.