A beginner’s walkthrough for the ranger class – Terraria 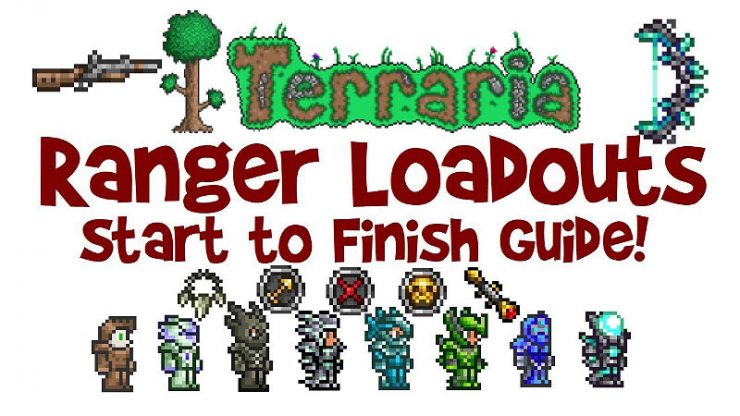 I’ve been playing terraria since 1.2 was first released and completed the game using each class on both expert mode and normal mode multiple times. My favourite class out of them all was ranger, and generally if I do a playthrough with my friends I take the ranger class. I’ve aslo taken ranger to PVP servers and finished quite high up in the leaderboards. Hopefully this guide should tell you some advanced tips about the ranger class before you start your playthrough!

I have made some videos on the key points of the playthrough, so I haven’t done one for every boss, but if you wanted to see ranger boss kills then just look it up on YouTube. Also, this is not a character I made for a ranger playthrough that I recorded, but one that I gave certain items to, to use as an example. I played with this character legitimately until hardmode, until I just took some items to save time. 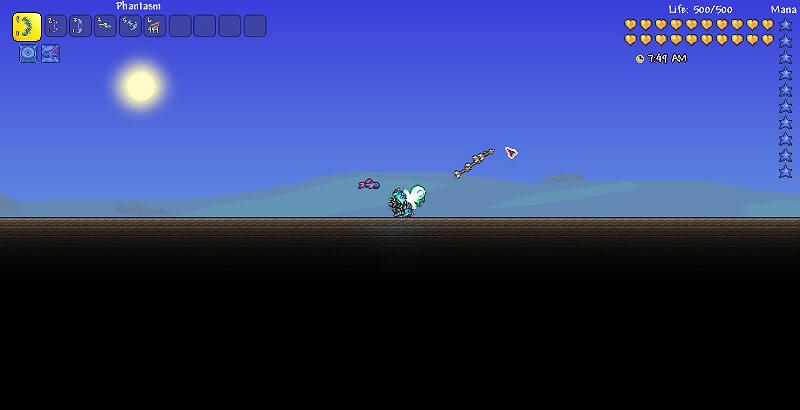 A ranger uses guns and bows to deal massive damage per second from far away. This grants a ranger extreme survivability because you don’t need to be in an enemy’s face to kill it. To be a ranger in terraria you generally need to be good at tracking targets and you need to know which targets to kill first. I tend to target the weakest enemy or the enemy closest to me, or the enemy that is the biggest threat to me first.

Guns and bows are the two most common types of ranged weapons. Yes there are others but the ones you want to stick to as you progress through the game are these types. Here are some differences between bows and guns.

Here is a comparison between bows and guns.

Don’t stick by this rule but most of the time if you have a gun at a certain tier, it isn’t worth crafting a bow as a secondary weapon.

Strengths and weaknesses of a ranger are as follows.

Rangers are good for…

A ranger’s limitations are… 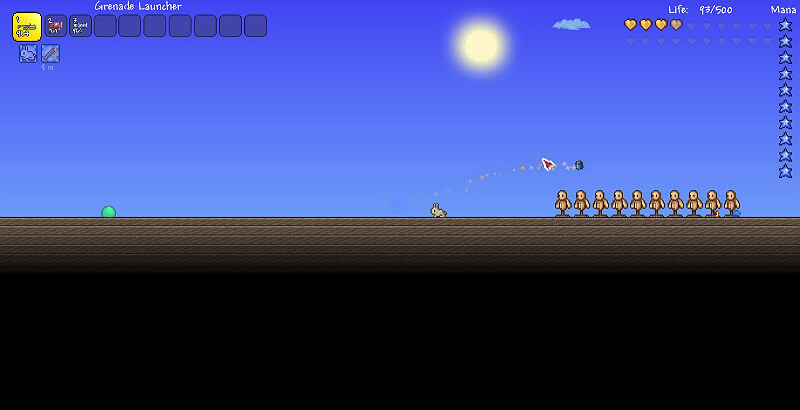 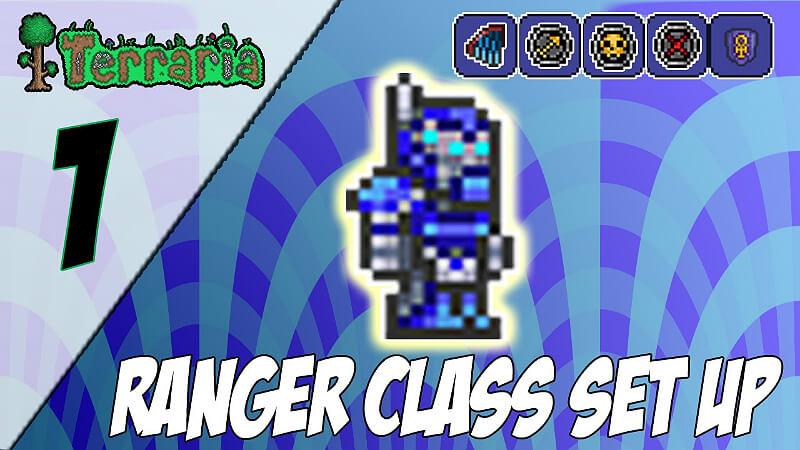 What you should accomplish by day one:

This is how my first day went.

What you should accomplish by day ten:

What you should accomplish shortly afterwards:

As an example I showed my first fight with the Eye of Cthuhlu. I did this third night, but I got a little cocky during the fight when I knew he was at low health and played more aggressively, The result was me barely winning the fight with 1hp remaining.

Accomplish most of what’s here before beating the wall of flesh. The lower your skill, the more you should accomplish to make life easier for you.

Remember you aren’t prepping for the Wall of Flesh fight, you are preparing for hardmode.

I battled the wall of flesh with a mixture of accessories which gave me greater movement and defense, with necro armour. I made a big bridge in hell and used that to protect me from the lava.

Early hardmode is by far the hardest stage in Terraria. Mechanical bosses have a chance of spawning each night and monsters that are much stronger than anything in pre hardmode spawn in their hundreds every night.

The first thing you want to do is build a base. Make it look nice but also function well. I’ve put examples of bases that I have built over my years of Terraria below. Remeber the balance of fuction and aesthetics is important.

This is the base I made on the world I used on my walkthrough. At the time of writing this, it is in development. Need to get more tin! Later on hopefully you will see this base thrive!

This is a base me and two friends built for my friend’s YouTube channel which he made a few Terraria videos on. 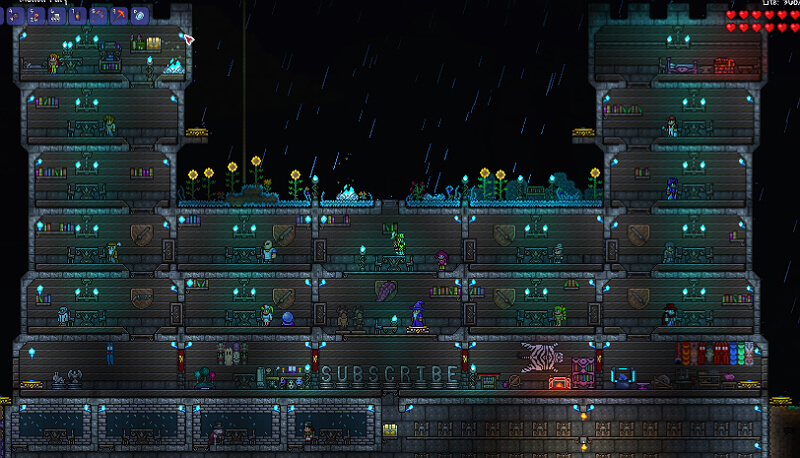 Here’s a base I built at end game. The NPC houses are all identical, there’s a farm above them and below them is where all of my storage and crafting stuff is. 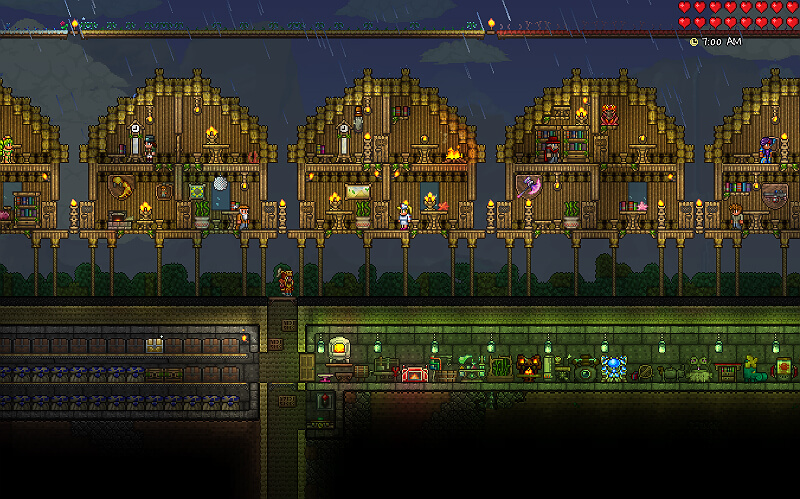 I could show you much more, but I think this section is a bit full on pictures now. Anyway here are some tips on building bases at early hardmode.

Once you have a decent base destroy demon/crimson altars in the corruption/crimson. In an ideal world you would get palladium, orichalcum and titanium, but it doesn’t make much of a difference so long as you get palladium.

After the base is built you should… 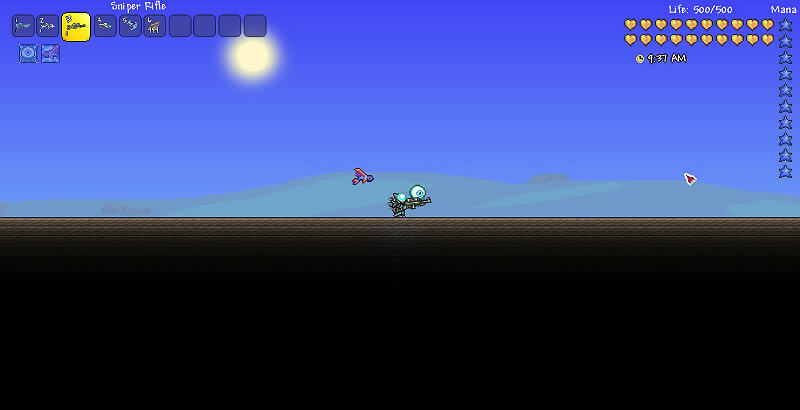 By late hardmode I mean after the three mechnical bosses have been taken down.

Sooner or later you should…

Here’s that arena I talked about earlier.

Now you should focus on getting shroomite armour by getting the truffle NPC. There’s a video by Yrimir on how to do that here, or if you don’t want to go onto YouTube the basic steps are.

With the truffle buy the autohammer and place it down. Then you should go to the jungle and mine chlorophyte and make it into shroomite bars. This gives you shroomite armour. Previously the best ranged armour set in the game.

Then kill duke fishron, make sure you have a good arena first! Again, a megashark and crystal or chlorophyte bullets is ideal, but if you manage to get hold of a venus magnum and don’t mind constantly clicking it will do slightly more DPS. Duke fishron drops the Tsunami, an amazing bow for late hardmode. 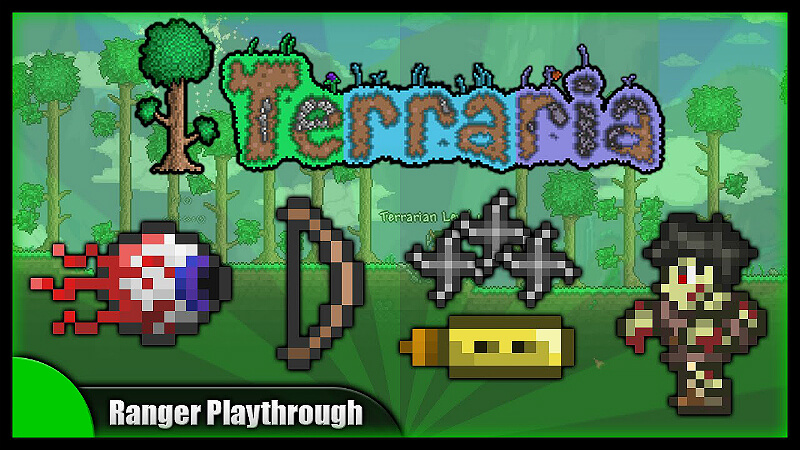 By endgame I mean post Duke Fishron. I know this isn’t what the community considers endgame to be but for the sake of this guide this is what I mean.

Kill the frost moon. The pumpkin moon isn’t really beneficial to a ranger but the frost moon is. You don’t need to get to a good wave, you just need to kill a few Santa NK1s to get a chain gun.
Make a massive platform. One that spans the whole world. Make sure it is covered with campfires and put your nurse in the middle of it. Every 50 blocks or so add a little room. It doesn’t need doors or anything, just a roof, you’ll know why in a bit.

Kill the Cultist. He’s at the dungeon. It’s an easy fight with a chain gun and chlorophyte bullets.
Kill 3 celestial pillars. Make sure the vortex one is included.
With the vortex fragments make a new gun and bow.

As of 1.3 the moon lord is the final boss in the game, and by many people in the Terraria’s community is considered to be the hardest boss to kill (with the current weapons the game offers you). Killing the moon lord on expert mode is nearly impossible.

So, if you listened to the last part of the guide, you should be at the far side of your arena now. To fight the moon lord you need to always be pressing A or D. Run the full length of the arena before running the full length back. Whenever you pass the nurse use her, no matter what your health. The moon lord’s basic attacks can be easily dodged by doing this, but his other attack will always be the way you die. Sometimes he fires a beam from his eyes. This thing can two shot you so must be always dodged. When you think he will use this attack, use on of those roofs to take cover. He can’t touch you then, and once its over you can keep going.

Get all three of his eyes low before killing them. You want to spend as little time as possible with his second form.

Once all three eyes are dead, they come out and shoot lasers at you. These are hard to dodge, so now it just becomes a DPS war. Use your chain gun and chlorophyte bullets to melt his heart so he will die before you die.

Getting the ultimate ranger loadout.

Kill the moon lord a few more times so you can get the Vortex armour. Head to the hardmode dungeon to get the sniper rifle (always good to have) and also try to get the SDMG from the moon lord. These are the two best ranged weapons in teh game, in my opinion.

Accessories can be whatever you want. I put all of mine to the menacing prefix. 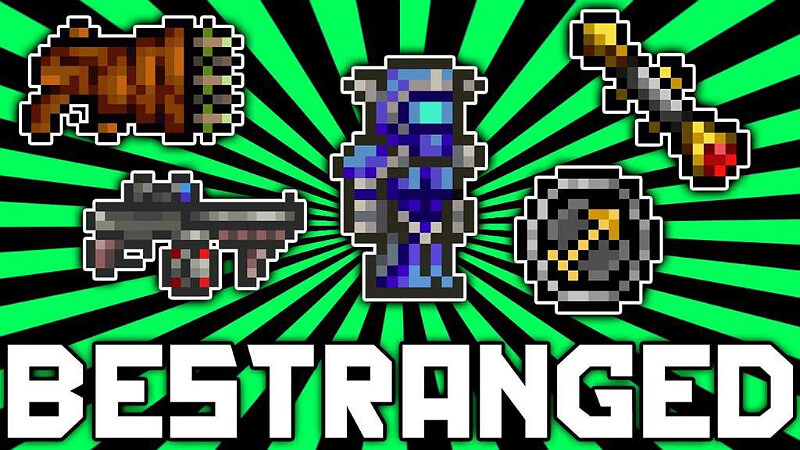 If any questions pop up, they get answered here. If you have anything to ask, put them in the comments and I will answer them! If they help, remember to thumbs up this guide! Still not answered the question? Tell me and I will update it here. This section is mainly to stop me clogging up the comments section with my own comments, and more focusing it on you guys 🙂 Once the comment has been answered, I may delete the comment. Still not sure on that though.

What about the endless musket pouch and quiver?

These items are quite useful, but are not effective. They can only be crafted in hardmode, when more special ammunition is available. Musket balls are pracically useless, and so are wooden arrows.

What about the ranged weapons that consume mana?

They are magic, or mage weapons. They are for another guide! Most ranged weapons consume some type of ammo and none of them use mana.

I didn’t get a musket from the Shadow Orbs…

Yes, you did. It is a guaranteed drop from the first orb, the same goes for Crimson Hearts and the Undertaker. You must have binned it or something.

Just listen to Yrimir, there!

There is one video and one image that I haven’t made. Everything but those two things were made by me, and where they haven’t been made by me I show where I got it from and gave credit. And even though I showed a Yrimir video, I still summed it up in my own words and didn’t put it on preview, just provided a link. What’s your problem?

What shroomite helmet should I use?

What’s the weapon you use the most often? Make the headset for that. Don’t make the rocket headgear because it’s useless. I’d generally use the bullet one.

You can’t choose your drops from the wall of flesh…

You can farm them though can’t you.

Destroyer is the easiest if done with this sort of arena…

If you build a platfrom out of the destroyer’s range its not really a legitimate kill in my eyes.

Summoning is harder than the ranger class.

When have the summoner peasants even thought that they could be a class? Thats why I have such a low priority on those guides.

What’s your opinion on shotguns?

I think paired with chlorophyte bulltes they’re viable, but RNGesus hates me so all of the pellets are guaranteed to miss when I use them :/ In early game the boomstick is incredible good against king slime and eye of cthuhlu because they are big targets, and up close they are able to one shot.

GTAmes
How to get every Light Pet in Terraria