Archwing, How to obtain it and how to play it – Warframe 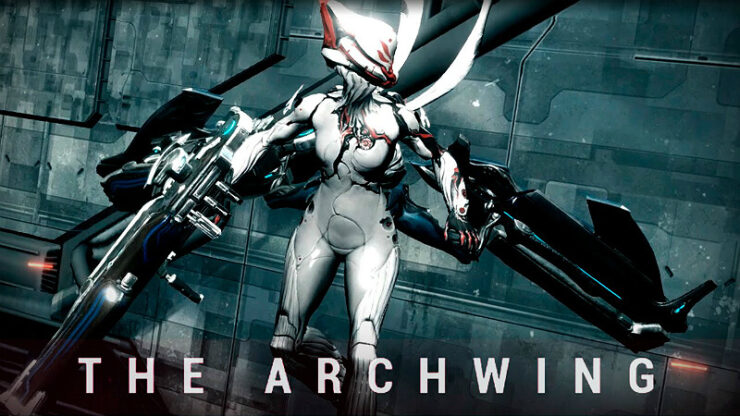 The update 15 has arrived. Along with it is the long hyped, highly anticipated Macross… eer… Archwing. As you know, with some sort of wings attached to your frame, you could fly in space without the spaceship and that thing is awesome to boot. How do you obtain it? How do you play with it? Wonder what kind of new enemies appear in space? All will be covered in this guide.

How to Obtain Archwing through chain of quests

First, welcome to my first guide. Second, I apologize if I made some (or many) grammatical mistakes. English isn’t my native, but I’m trying my best. Third, enjoy this guide. Thank you.

So, you want to fly, Tenno? want to feel the cold space and the heat of new battleground? You need to finish a series of quests. After this guide, you will be the space flyer. Let the enemies know that you are the new terror in the dark skies.

To activate the quest, you need:

First, Lotus will point your first mission to Tessera, Venus. The mission is similar to Operation Crash Gate event couple weeks ago, except it’s the Corpus you fight now. After you reverse the polarity in the void gate, you’ll be teleported to a Corpus outpost and you’ll facing Lynx, a Corpus robot similar to Jackal. It will be accompanied by a handful of Ospreys. You can’t hit Lynx until all the Ospreys are down. His abilities are high fire rate machine gun and summoning 2 or 3 turret. Yep, he calls the Corpus ceiling turret and place it anywhere. Be sure to use anti Corpus AoE skill like Overload, Pull, or if you only using Rhino, spam Stomp the ♥♥♥♥ of it. 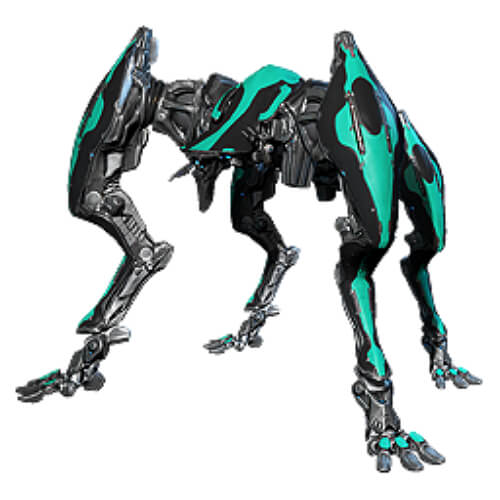 That’s Lynx. Corpus do like naming their robots with dog or cat species.

Anyway, after you kill that thing, pick the void key, and close the void gate for good. Then Lotus will point you to the Orokin cache that has the Archive. There’s 3 caches, but the pointed 1 cache is the mission objective. If you feel like exploring, you’re free to obtain all 3 caches. When you’re finished, get to extraction. Mission 1 clear.

Shortly after obtaining the archive, Ordis will inform you about the Odonata parts coordinate. It’s in E.Gate, Venus. Go fly there. It’s the excavation mission. You need to find 3 BP parts, the System, the Harness, and the Wings. Each successful excavation, the game RNG (Praise the RNG) will randomly give you one of these parts. It’s recommended to finish this in one run, along with other people. Usually it took 4-5 successful excavation to get all the parts. After you got everything, go to extraction.

You need to craft the Archwing to get the next mission. 6 hours for each part and 36 hours for the Archwing itself. Thankfully you can craft the parts simultaneously, unlike the Mirage quest. So it took 42 hours total to craft an Archwing. I skip the 36 hours with 50 plats.

You finished craft Odonata Archwing? Good. Next, Lotus will contact you. You need to jump into a Corpus ship, in Montes, Venus to steal Balor Fomorian intel data. I suggest you use a frame with lots of shield like Volt. because the later part of this mission (Archwing part), you need someone with lots of shield.

Even though Lotus told you to steal data, the mission oddly tells you to KILL EVERYONE. So yeah, you run n’ gun everything in your path. After half way through, Vay Hek will send his Grineer army and infiltrate the ship the hard way via personnel pod. You’ll be killing Grineer now instead of Crewman and Moa.

And after kill everyone, Lotus order you to extract, but Ordis can’t find a place to extract you, due to excessive damage in the Corpus’ ship. Then the Archwing part comes.

Continued from “The Quest”

Due to excessive damage, you can’t be extracted. Lotus suggest you to jump out of the ship and Ordis will send your newly crafted Odonata to you. Ordis will wait somewhere in the safe zone and you need to fly to the safe zone.

You can control it with WASD key. Shift to activate the afterburner. however, since you’re floating in space, Space to ascend and CTRL to descend. Left click to shoot and right click to aim. Your frame’s skill are replaced with Archwing’s. 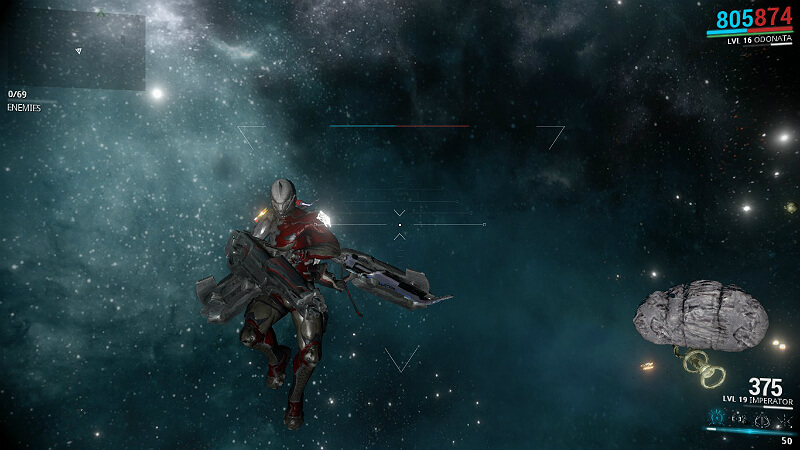 When you crafted Odonata, you’re also get 2 weapons, Imperator and Veritux.

Imperator is a low damage but very high fire rate and lots of ammo (250 ammo) vulcan gun. Don’t worry about ammo. They magically regenerate themselves.

Veritux is a gigantic broadsword that has high slash damage with standard swing speed (0.8).

To use melee, press E, as usual. But in Archwing mode, when you pretty close to enemy (around 100-200 meter) and press E, you will lock yourself to target, dash to it and slash them. Repeat press E until enemy explode. If after your target dies and you keep pressing E, you will jump to next nearest target and slash them like previous victim. You can also hold F to equip your sword like in Melee 2.0.

Archwing doesn’t have it’s own stats. It directly uses your stats and increase your stats a bit (around 15-20%). But you can further enhance it with Archwing related mods (+20% to armor, +40% shield, etc etc) 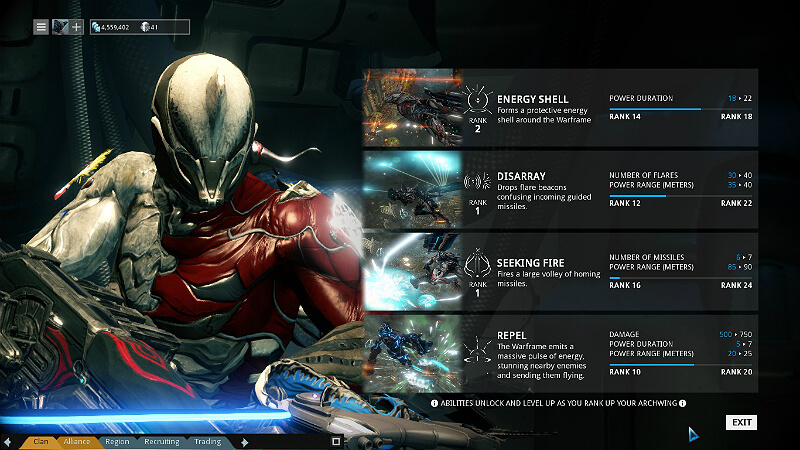 Forms a defensive shell that protects you from mostly frontal attack. Similar to Volt’s Electric shield, but it’s not stationary and provide fire elemental damage bonus whenever bullets or missiles pass through from the back. It also has no damage limit but has time limit, which upgraded everytime the skill level goes up.

Before you can shoot fancy missiles, you need to learn about defense first. It’s a total lifesaver, because in space no one can hear you scream health orb are kinda hard to find.

Drop flares around you that confuses missiles to chase the flares. Also stuns enemy around you when deployed.

It’s a evasion flare and countermeasure. Plus the flare could stuns enemy for couple seconds. When you could use this skill right, you can free yourself from enemy pressure and launch a counterattack. With the skill level goes up, the skill upgrades the number of flares and effect range.

The name is kinda meh, so I call it… Itano Missile

It’s my favorite one. This skill lets you fires many heat seeking missile at once and they automatically flies to nearest target. It looks very cool and reminds me of Macross. Yep, this skill pretty much turns Warframe into Macross anime. What we need now is Lotus singing Macross, Macross 7, and Macross Frontier OST in the background while we’re doing 1 vs many dogfight.

Well… it doesn’t look as cool as that, but at least they’re trying.

With the skill level goes up, the skill upgrades the number of missiles shot at once and effect range. YES!! MORE MACROSS IN WARFRAME!!

The Warframe emits a large pulse of energy around it, stunning nearby enemies for couple of seconds and knock them off. It’s the Odonata ultimate skill. Similar to Banshee’s Sonic Boom. Highest skill rank deals 1500 impact damage. Whoop! And the pulse PERMANENTLY disarmed the enemy that caught in its range.

As the skill level goes up, the skill upgrade damages, pulse duration, and effect range.

What’s good new gameplay without new enemies to kick? Archwing bring new enemies to the field so they can be your new punching bag while grinding for Archwing mods. They also fly, like you.

And generally, there are 2 specific faction related environments. Grineer has more open space while sometimes the asteroids shards are flying everywhere. You can use them for cover, though the small asteroids are destructible. 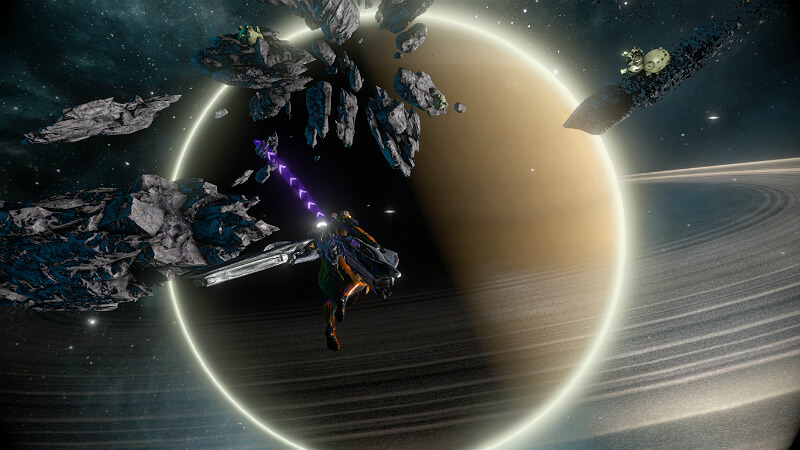 Corpus on the other hand, puts you in a series of trench, consisted of ship holes and entrance, with some open deck in between. 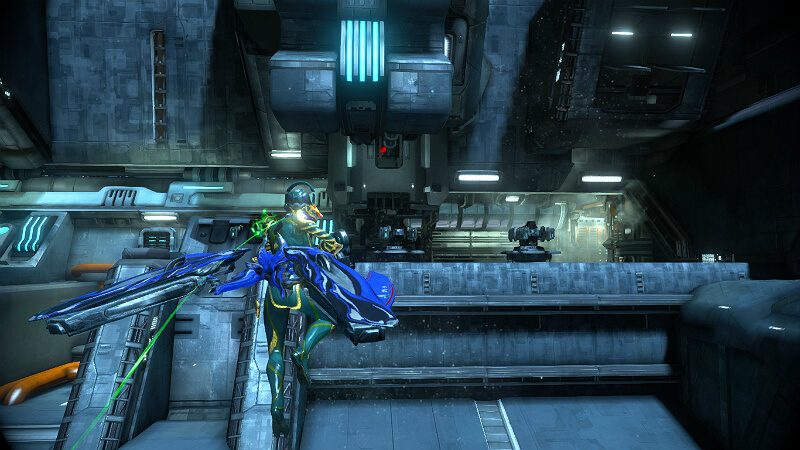 The enemies I presented here are the ones that I met so far. If I found more of them, I’ll add it later.

Grineer new flyers are generally strong. High damage with high HP. And they swarm. You need to spam those Itano Missile and cast Barrier often. When they get stunned, slash them with your sword. 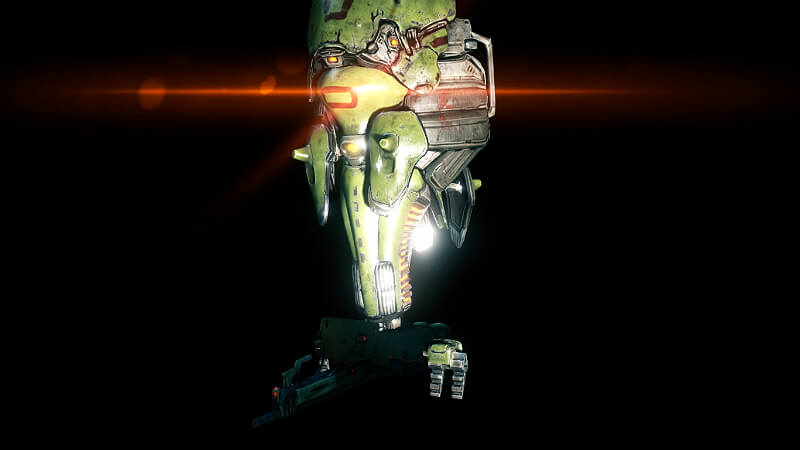 The space Grineer Lancer. They shoot fairly fast and pretty low damage. The upgraded units of them are called Shielded Dargryn, which looks like Dargryn, but have destructible frontal energy shield (acts as extra HP) 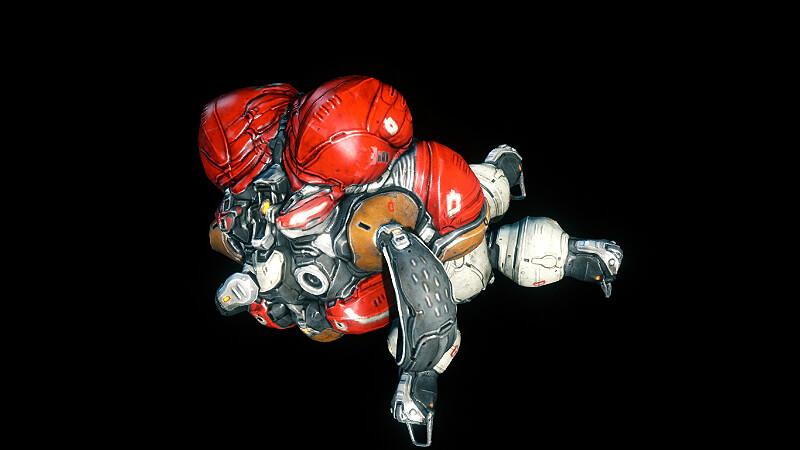 They are like the space Ballista. Dreg shoots little projectile from faraway. The upgraded Dreg called Shielded Dreg that shoots continuous laser beam, eating your shield little by little. Combine with being shot by Dargryn, your shield will be torn in seconds before you know it.

SHOOT DREGS FIRST WHENEVER YOU ENCOUNTER A SQUAD OF GRINEER FLYERS.

Corpus flyers are genereally weaker than the Grineer counterpart (DE loves Grineer a bit too much), but Cropus flyers usually will flank you and they seem spawn at every turn or any trench you pass. You can throw missiles at them and shoot them. Your call. Just be careful not to get carried away. The next you know, their Osprey could swarm you. 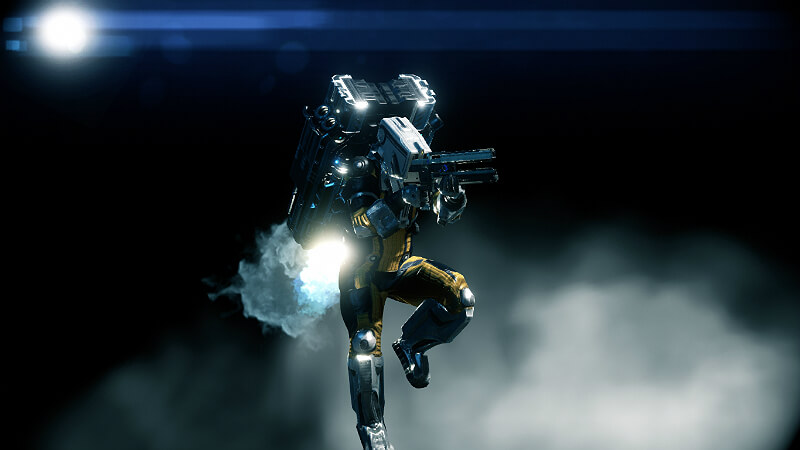 Rangers are Crewmen with jetpack. There are 3 variety of them. Equipped with Dera, Penta, or Quanta. That’s it. Easy to kill. Just be careful around Quanta Ranger. 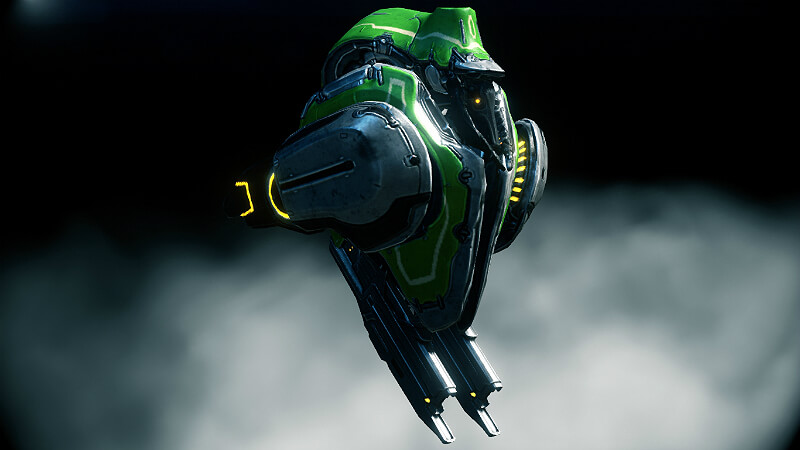 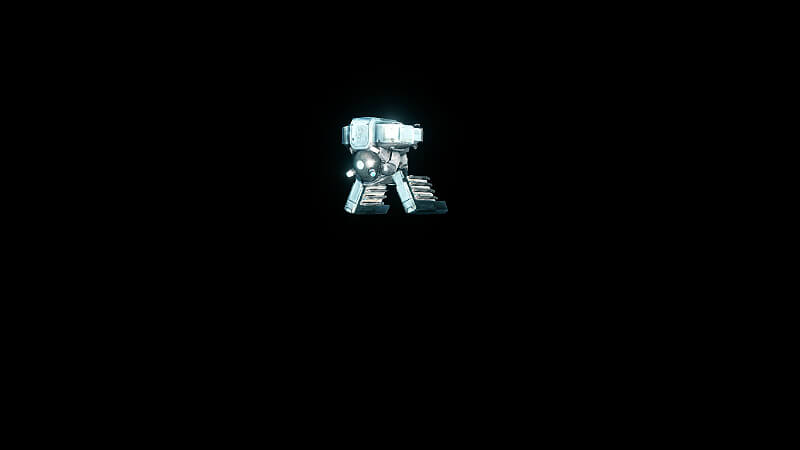 Weak, small, spawned in 2-3 units from Carrier type Osprey, and shoot little continuous laser beam. But you need to kill them as many as you can because they dropped the Archwing guns damage mod (+50% damage at max rank)

Now that you know the basic things about Archwing, go, earn that Wings of Freedom (hehehe I had to do that) and be a space ninja… in space…literally.

Oh, I hope they add PvP or Dark Sector in Archwing mode so we can fight like this in the future.

GTAmes
The Scoliac: The Largest Area Damage Weapon In The Game!