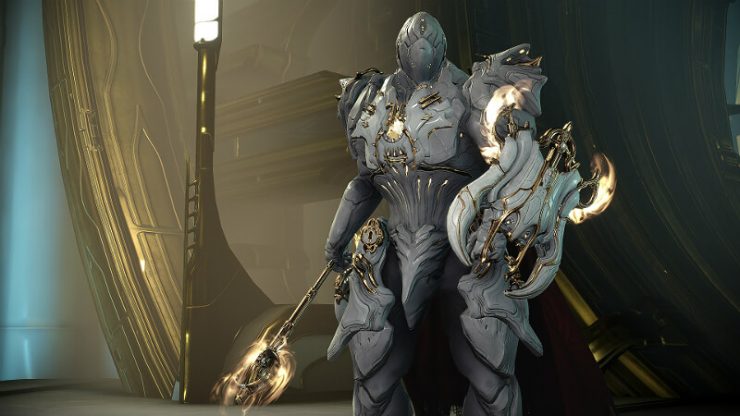 Hi there Warframe player that is sooo bored they decided to click on my ♥♥♥♥ guide! Today, I will be teaching you how to play one of the oldest frames in the game, Rhino! Rhino is an amazing frame with the ability to tank, CC, and buff, making him a great team player in any squad or LOR. I will be telling you my builds, how to farm him, and Fashion Frame options.

How to obtain Rhino?

Rhino is one of the easiest frames to obtain in the game. You can get him from farming the Jackal on Venus. Jackal is an extremely easy boss, and getting Rhino from Jackal will make most of the star chart a piece of cake.

Fighting the Jackal is very easy; he is an easy boss but can be really hard for new players. I recommend new players use the recruitment chat to find other new players, or an experienced player who has no ♥♥♥♥ing clue of what to do anymore.

Jackal is a simple boss. His abilities include: stomping (it knocks you over and can be difficult to get back up), firing rockets (these do a lot of damage, so hide behind a column when they go off), Machine Gun things, and, finally, Jackal can spawn ospreys that drop mines. To defeat Jackal, hit his legs until he reaches his stagger state: 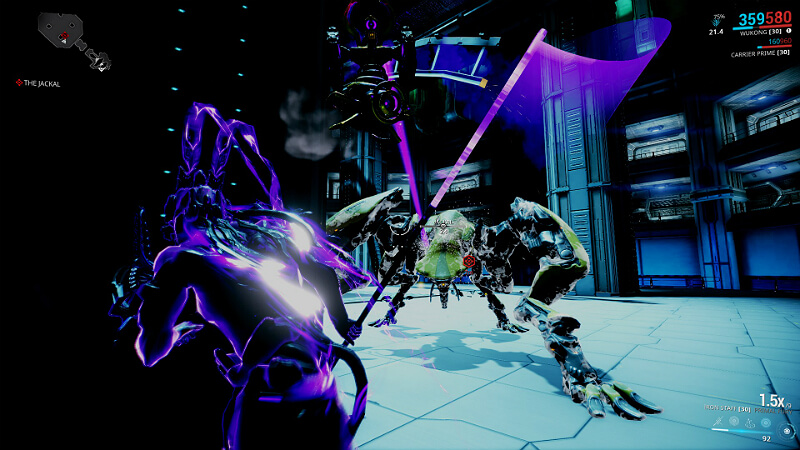 You will do damage to Jackal’s main health pool when you fight him in his staggered state.

After doing this a couple times, Jackal will die and you will get a random part of Rhino. To make Rhino, you need the Systems, Neuroptics, Chassis, and the main BP (which can be bought from the store). 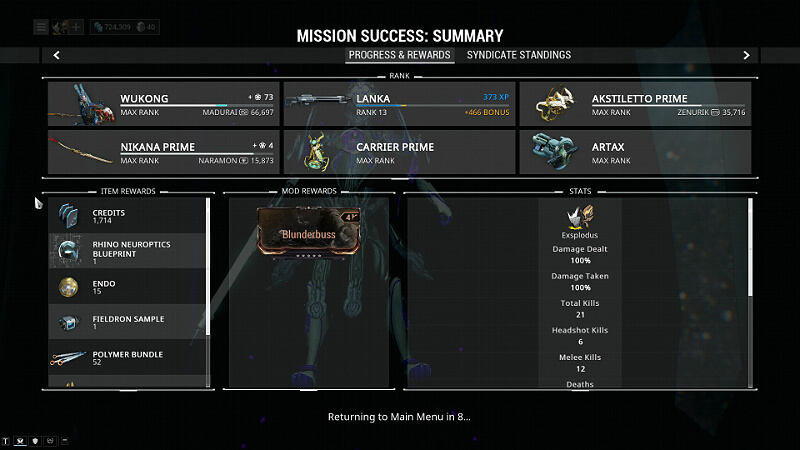 All the resources you need are on Earth to Ceres, or you can use recuitment chat so someone can taxi you to the mission nodes you need.

Do you want to obtain Rhino Prime?

So here we go with the build section of my amazing Rhino guide. I will be using an unformaed Rhino Prime for this guide. If you have a normal Rhino, just forma in a Naramon Polarity or dash polarity.

I just got Rhino Build

This is a build for new players who just got Rhino (no forma required, no Orokin Reactor required). 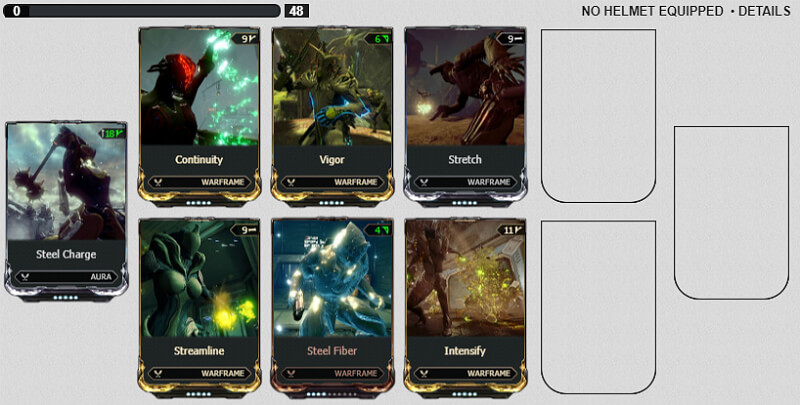 All the mods in here are easy to acquire. The really nice expert players usually give these out for free. Otherwise, try doing Lith fissures and selling those prime parts. You can use warframe.market to help you find a buyer or the price you should sell it at. 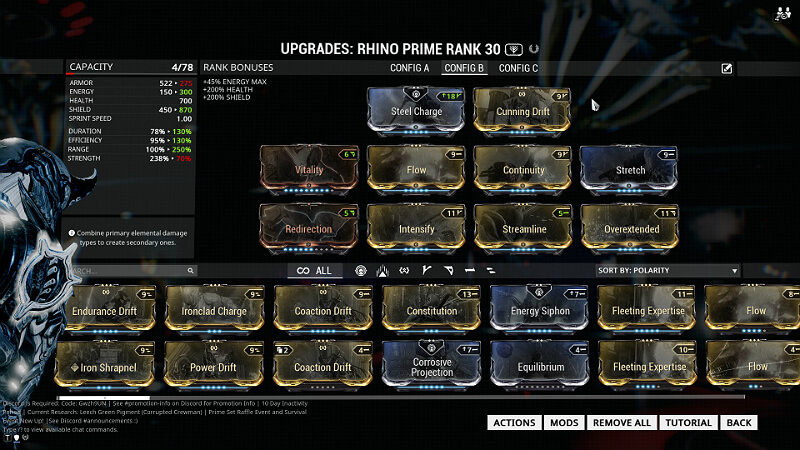 This is the most used loadout for LOR. You can CC enemies to revive teammates and help your team do more damage. You can’t really use iron skin here, but Rhino’s 1st ability is so much fun with max range. You can also replace the streamline with the Rhino stomp augment which will help your survivability, or you can use piercing roar which isn’t that good damage wise, but the puncture proc is pretty good. You can also forma to replace the Aura slot with corrosive projection, but it’s not required.


This build works really well if you have the Zenurik Focus School. Otherwise, it might be a little harder to use. 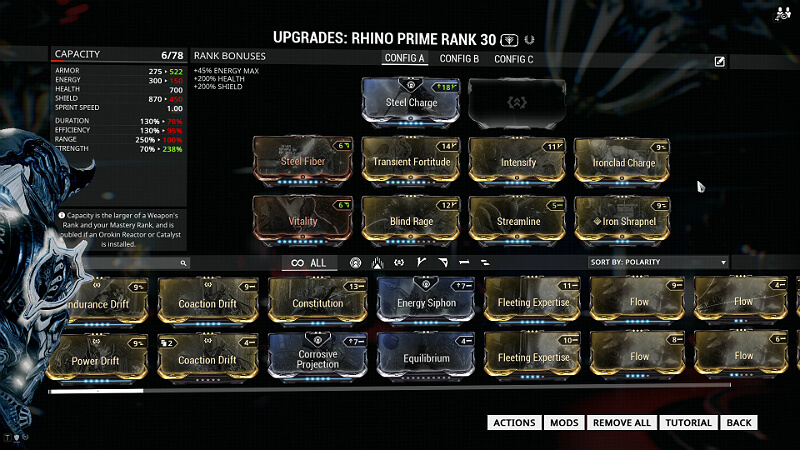 I can’t tell you enough how amazing this build is, but it is a little harder of a build to use. No matter what you do, you need to rhino charge a few enemies to get the multiplier up on Rhino’s armor, increasing the amount of iron skin you get. With this build, you get 6,000 iron skin armor without the rhino charge multipler, after rhino charging 2 people you get 13k of iron skin points. I recommend rhino charging 2-3 people for lvl 0 to lvl 50 missions and at least 4-5 for anything above level 50. Also, because of the immense power strength, using roar will give you a ♥♥♥♥ 119% BOOST IN WEAPON STRENGTH! I use this build for everything, cuz you can tank like there is no tomorrow. You want a zenurik focus school with this build; otherwise, the energy drain is too much. You can replace the Streamline with a Fleeting Expertise, but I wouldn’t recommend that because you have like 0.5 seconds to use your armor mulitpler that you get from Ironclad charge. Also you can forma in a V polarity in order to fit power drift in the Exilus slot. 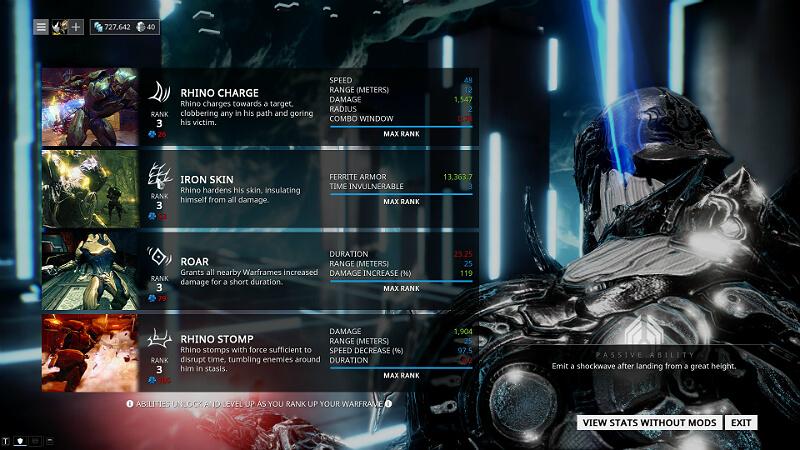 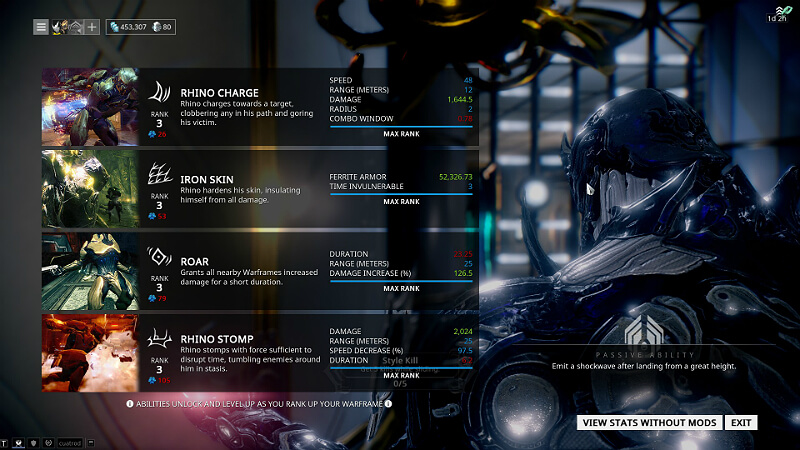 This isn’t technically a Rhino build, but this is what is needed for the build above (I think you need at least 300,000 focus points, but you just need the cooldown at level one and the overflow thing at level one): 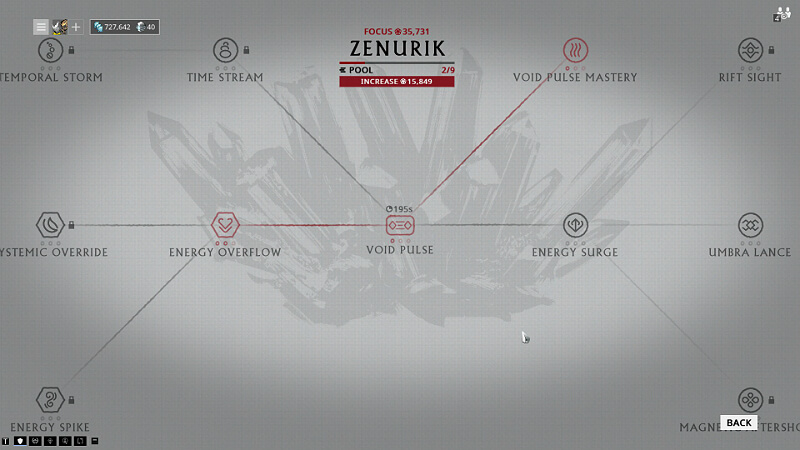 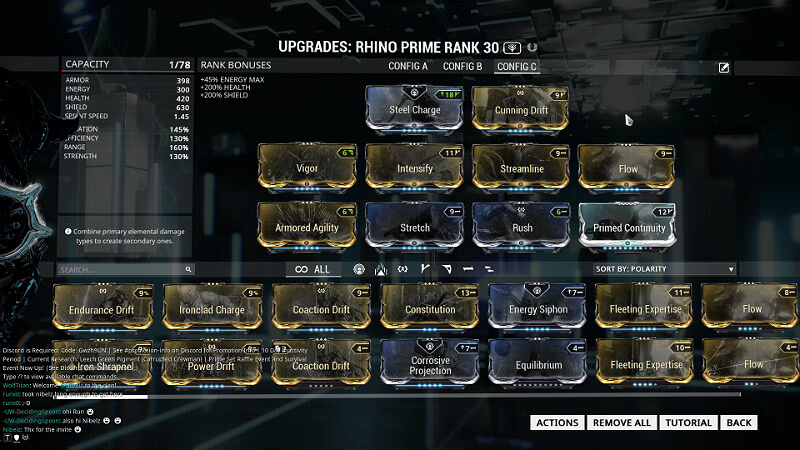 Believe it or not, Rhino actually has one of the fastest sprint speeds, for some ♥♥♥♥ing reason. This build will help you unleash the speed demon Rhino is supposed to be, and before any of you start
saying bu-bu-buutt you copied nooblshowteck wahhh, this build is 100% original. Back on topic, to get a crap ton of speed (not the drug), jump, charge, hit shift, and then sprint to cover large areas super quickly.

IF YOU HAVE A SUGGESTION ON HOW TO MAKE MY BUILDS BETTER, GO AHEAD AND COMMENT!

Rhino is pretty easy to Fashion Frame. I will be showing you some of my Fashion Frame Loadouts for Rhino. Just do what you like! 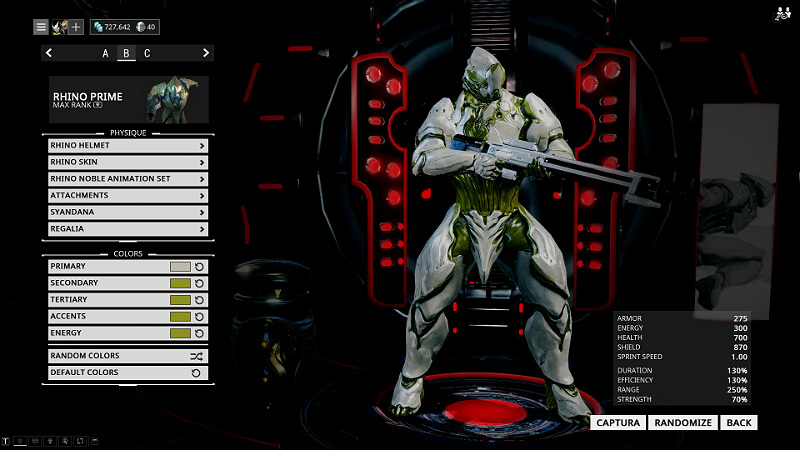 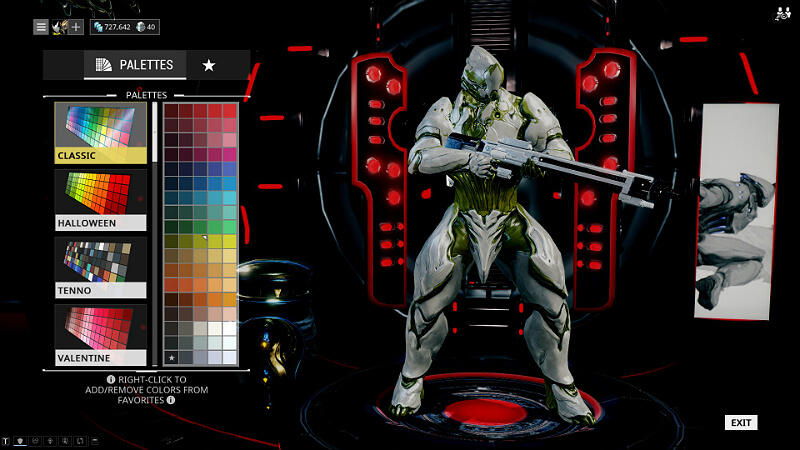 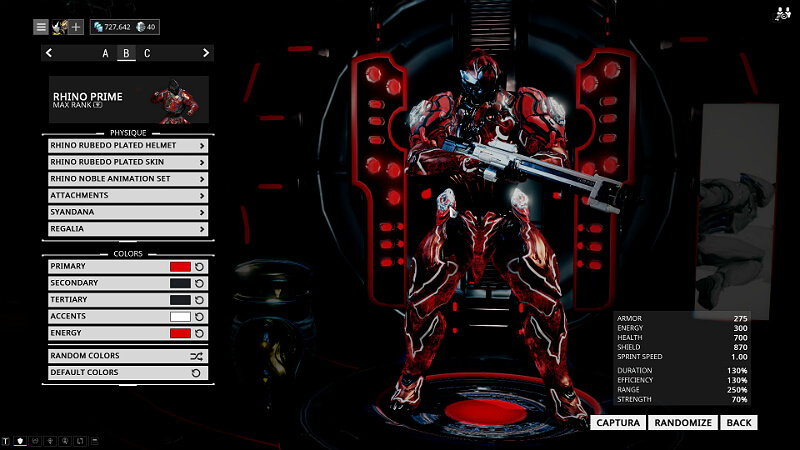 So I don’t know why people don’t use this skin, cuz it’s pretty cool looking. It’s called Rubedo plated Rhino. It’s $1.59 or something like that for the whole skin while one tennogen helmet is $5. Get a color palette with white and red in it, or use Halloween and Classic colors. Because of stupid Prime attachments, you have to color in those arm and leg bits to hide them. 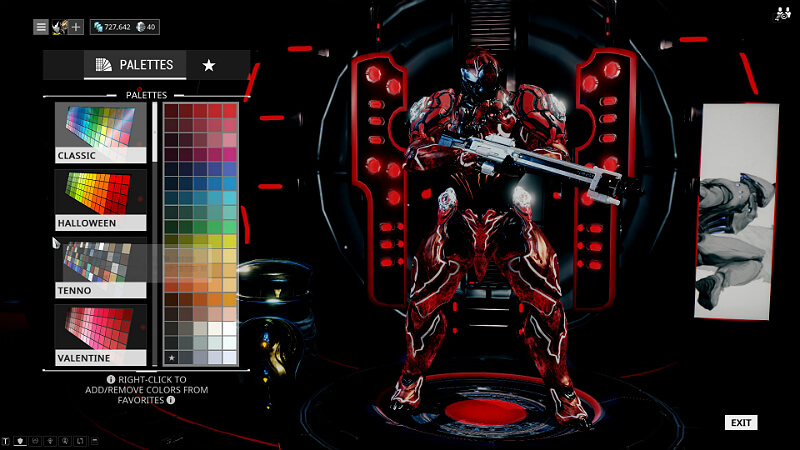 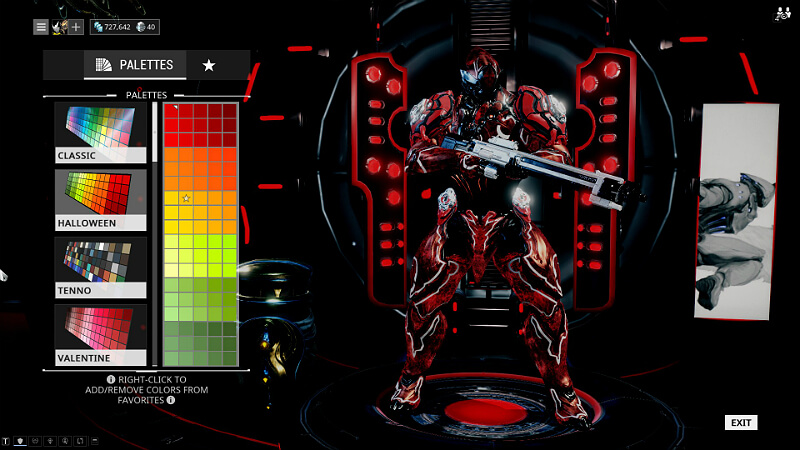 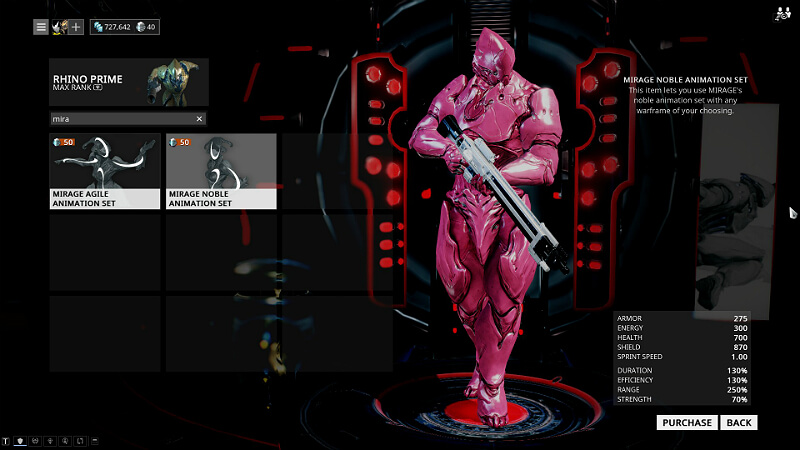 Use the Valentine Palette and Mirage Noble. I’m telling you, all the grineer and corpus will cower in fear. 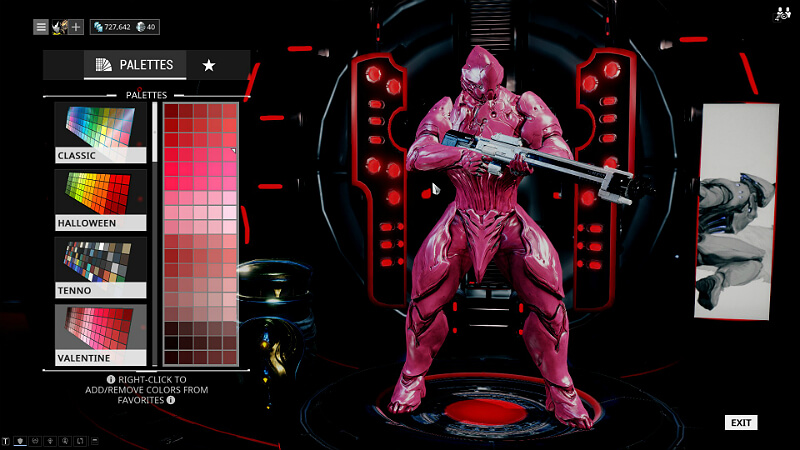 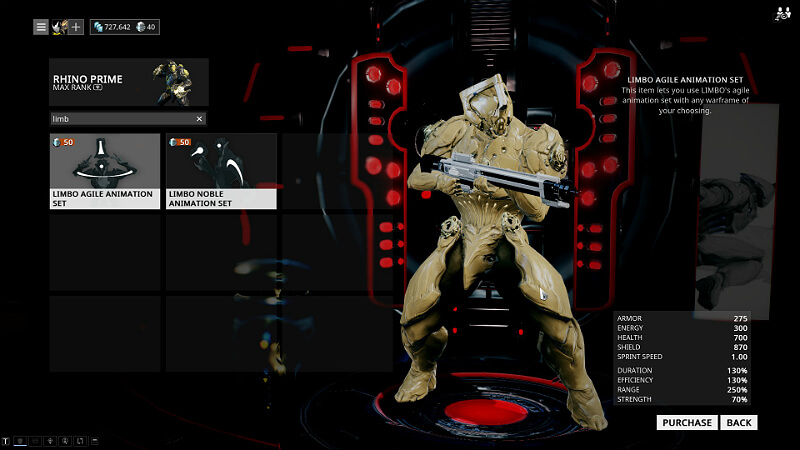 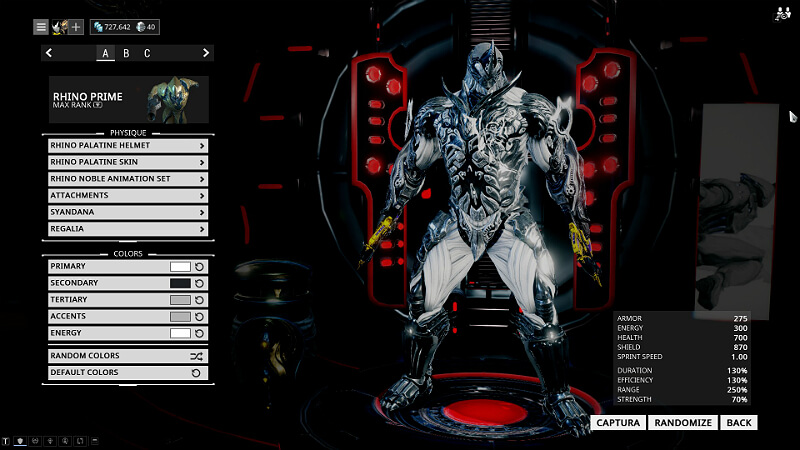 The color set I usually use. The Palantine skin is really good looking. Classic color palette, the thing you get from LOR svtekana or something, Scar Sigil from 2nd Dream, and Edo shin plates. 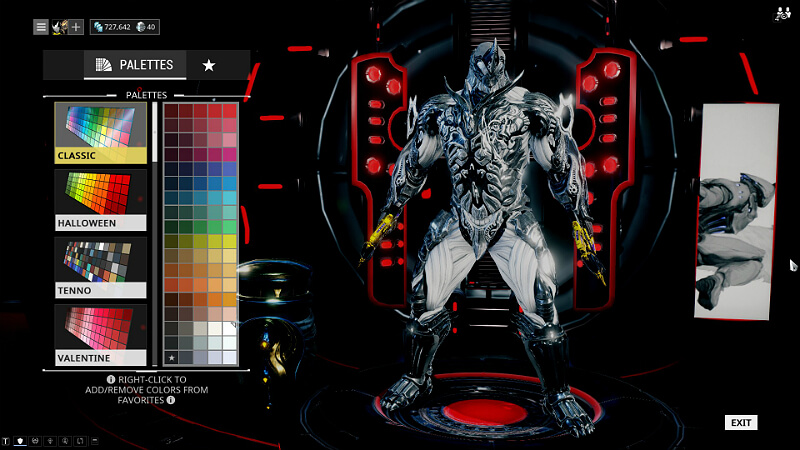 I hope you enjoyed my guide. I love Rhino. He is an amazing frame that can suit so many roles.

My in-game name in Warframe is Exsplodus. Feel free to add me 😀