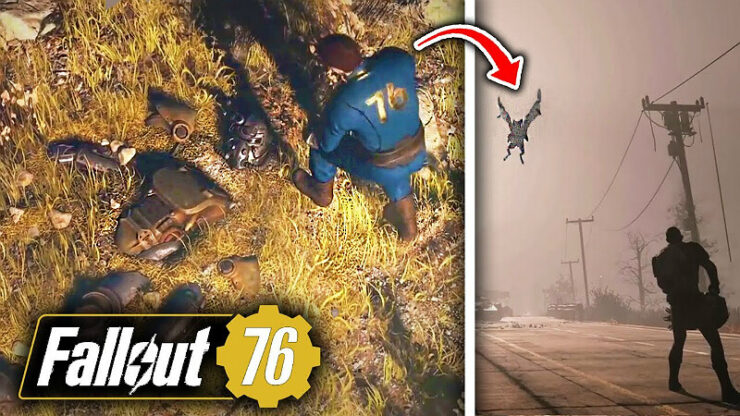 Confirmed creatures refers to those that we have seen in official trailers, in-game footage, and the NoClip documentary. Creatures shown in concept art are excluded from this list as they are not a representative of their presence in the final game. As such, creatures shown only on concept art have their specific section below. All of the creatures shown in this list will have a link to an image as a source of their existence in-game. I will assume that creatures shown on this list that were present in Fallout 4 will also have their corresponding ‘variants’ present in Fallout 76. For example, take a Deathclaw. In Fallout 4, they had multiple variations that looked different, such as savage, alpha, albino, glowing, and such. The same goes for the rest of the creatures.

The little star ⋆ next to the name signifies that the creature is completely new to the Fallout series. 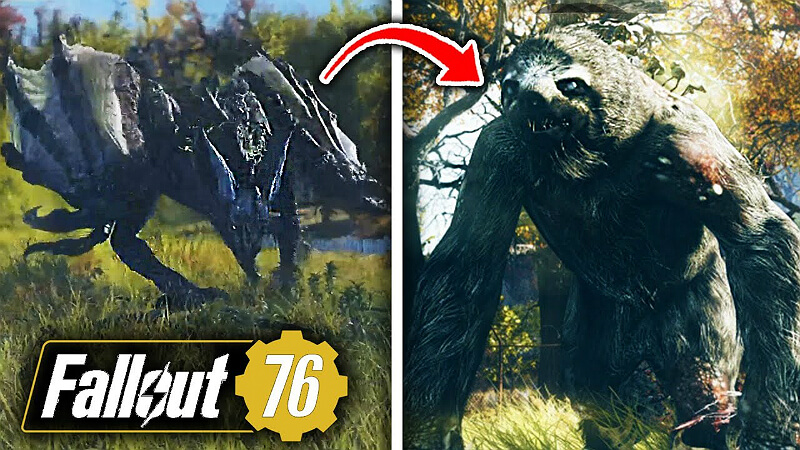 Notes: Giant bat-like creatures that can fly and live underground. They attack using their claws or employing a sonic-like emitter beam that is strong enough to blow up generators with one hit. Extremely aggressive. Main quest revolves around using nukes to obliterate their homes.

Notes: Reptile creatures that walk on two feet and can use their tongue for close-quarters combat.

Notes: Gigantic sloths covered in decomposed fur. Can use their giant claws as weapons. Grows a type of radioactive fungi in their backs which they can use to spray poisonous gas to harm their prey. They can also throw rocks at the players from afar, similarly to Deathclaws.

Notes: Giant beast of unknown origin made of thick and pale skin. Seemingly clumsy but strong, one of its arms is significantly bigger than the other.

Notes: Giant frog with radioactive mutation. Concept art suggests that it has a long tongue which it can use to capture and hold their prey.

Notes: Giant moth-like creature that has prominent red eyes. Unique creature that works on stages. During its first stage, it stalks and creeps up on the player; you can’t fight him right away. Has an in-game museum dedicated to its lore in the West Virginian area. Probably part of a quest. NOTE: The image attached is NOT a confirmed representation of the Mothman. The details we have so far point towards it, but seeing as how Bethesda wants the Mothman to be a surprise and a special part of the game, we probably won’t fully see him until release.

Variants: None known yet. Probably a unique and single creature.

Notes: Human ghouls that are in between sane and feral stages of decomposition. They can carry and use firearms and melee weapons, as well as equip armor pieces.

Notes: Irradiated humans that transformed into zombie-like creatures. They attack anything on sight, but are clumsy and can only use their bodies as means of aggression. Completely fearless.

Notes: Humanoid creatures; can stand up still and has five fingers. They use robes and gas masks, seem to live in or close to mines.

Notes: Giant bee-like creatures, as seen in the concept art. They carry a proportionate honeycomb in their backs that releases swarms of smaller bees when in peril.

Notes: Six-legged giant arachnid that consume the blood of their prey. Very frenetic during combat, can also jump considerable heights.

Notes: Canines trained to attack hostile entities, such as the player. Trained by who? Other players? The Scorched? Unknown.

Notes: A breed of canines that underwent high radiation exposure and transformed into vile and hostile mammals. Often hunt in groups.

Notes: Humans that were exposed to the FEV and became drastically taller and stronger, albeit usually more stupid (and green). They hunt humans for food and sport, but are aggressive to mostly everything.

Notes: Humanoid looking creature with pale skin and long extremities. Extraordinarily agile and fast, seems to live in murky and dank swamps. Quite similar to the Alien Abominations from Mothership Zeta.

Notes: Irradiated mole rats exposed to high radiation levels. Easy to deal with but mostly attack on groups and can hide underground and later emerge for surprise attacks.

Notes: Small feline mammals, I don’t need to describe cats. They’re passive and can be used for food as a desperate measure.

Notes: Reptile-like creatures extremely hostile to all forms of life. Fast, cunning and resilient, they are one of the biggest threats of the Wasteland. They can only attack using their claws and sharp teeth, but can reach their prey in a matter of seconds thanks to their sprinting speed.

Notes: No image available, only mentioned in the NoClip Doc. A Possum with two-heads, I guess. Not much to say.

Notes: Also only mentioned in the Doc. They seem to live in the Cranberry Bog. The extent of their intelligence is unknown. Hostile towards the player? Can communicate somehow? The image suggests that these plants eat flesh, as rests of human bones and corpses can be seen underneath them.

Notes: Two-headed cows typically used by merchants to transport their goods. I imagine their role will be similar to what they did for settlements in Fallout 4, provide extra food to your locale.

Notes: Human players. They can either be allies or formidable enemies depending on the player. Can trade or explore with them. Unpredictable.

This list results in 21 creatures out of the 63 confirmed, just a little under one third of the total. 22, if you count the Vault Dwellers, but I don’t think we should count them as we, the players, are the Vault Dwellers ourselves.

¹We don’t know its final name yet.

² It is mostly assumed that this creature is supposed to be the Wendigo from the folklore, but no there’s no official confirmation yet. 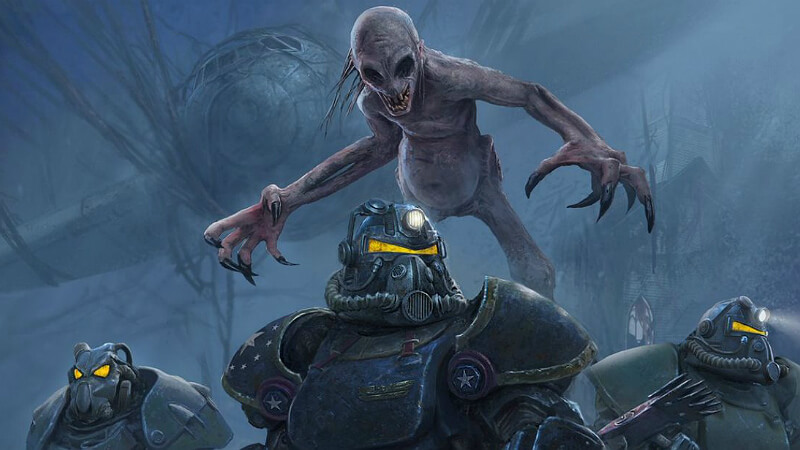 The following creatures have only been seen on official concept art. Their presence is expected but not precisely guaranteed.

Notes: They seem to equip a respirator machine along with a circular glass helmet. Their suit has a propulsion system that keeps it afloat. Needless to say, they (or it) appears to be of Alien origin. Most likely connected to the Zetans, the Fallout aliens.

Notes: During a glimpse at the in-game map we can spot an image of a crocodile in the map, suggesting their appearance. They can be either irradiated crocodiles, or the Gatorclaw from Nuka World, which seem to be mutated crocodiles.

Notes: The Pope Lick Monster is an urban legend regarding a demonic creature that is half man and half goat, spotted in Eastern United States. An image of the Pop Lick Monster was used in the NoClip documentary, but not by Bethesda themselves, so it’s highly possible that the staff from NoClip just decided to use this creature as a background image and not as a representative of the game’s content. 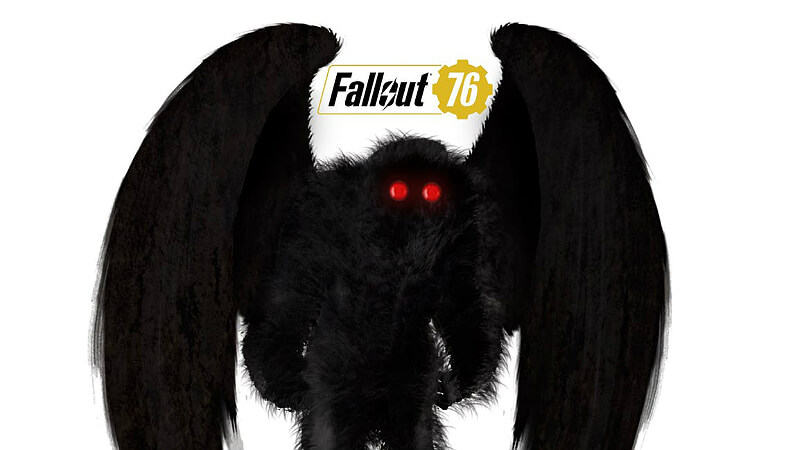 During the NoClip documentary, Nate Purkeypile (lead artist at BGS) pointed out that “all the creatures” from Fallout 4 were brought back and “fixed” for Fallout 76. The extent of what “fixing” entails is unknown, but my guess are possible animation and gameplay balance tweaks. In any case, the following list encompasses all the creatures that could return from Fallout 4, excluding illogical ones (e.g. synths), but including the two DLCs that added new fauna: Far Harbor and (specially) Nuka World. Some of the creatures in this list are practically confirmed, since they are part of the “core” fauna that we’ve come to expect in Fallout games (like Radroaches).

I did not mention Fog Crawlers, Gulpers nor Anglers because they seem to be exclusive to the Far Harbor area due to the special fog radiation present there. But hey, who knows, Fog Crawlers are cool so I wouldn’t mind to see them back. I also did not mention Mutant Hounds since, as far as we know, those were created by the Institute specifically, which isn’t around by the time Fallout 76 takes place, so ideally they shouldn’t be present in the game. I also didn’t list seagulls or ravens since they’re more ambiance than actual creatures. I’m sure we’ll see those types of critters again in Fallout 76, though.

All in all, these are 45-47 creatures that could appear in the game, combining the three lists together. That’s a ton, I wonder what else is left? I’m debating myself over whether or not robots count as creatures. If so, these are the robots we have seen from in-game footage:

Even counting all known robots, the list is still on 53-55 mobs confirmed for the game. That’s at least 10-8 blank spots left for new creatures to be in the game during launch. What would you like to see? Only a handful come into mind to me.

PS: Fun fact! Each enemy has an average of 6 unique variations. That means that there will be about 378 unique enemy types to fight in Fallout 76! Combat will not get stale for a while. Also, that number does not include Legendary mutations nor the new variations we have seen so far (like “weak” and “diseased”).

There are a ton of things to shoot at in Fallout 76.