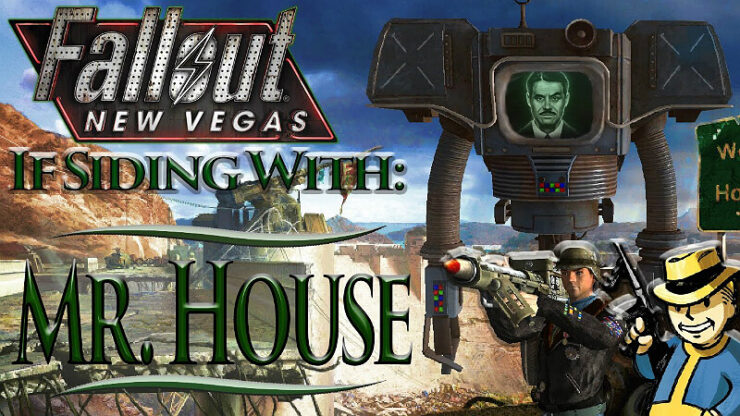 Did you even pick apart his arguments and actions?

First thing in his favor is that he saved my ♥♥♥. He didn’t need to do that. Really. My head had a new hole in it. I don’t recall a single other Fallout 3 or NV character or faction to pull me out of my grave and put so much faith in me to fulfill their life-long dream.

Second thing is that he doesn’t consider me a mercenary.

Just check out that vocabulary and demeanor! He’s impeccable!

He’s a visionary, he’s a hopeful dreamer who got off his proverbial ♥♥♥ and actually does something for the future, not for the present. He sees and works for more than merely survival or control, he fights for progression, evolution, advancement; in his own words:

Those are his goals! Not territory control. Not being the ruler of the land.

Not invading other places. He’s working for the people, for the human race:

That was what really changed my mind about him.

As for the popular choice, NCR, I finished my first play-through with them, but I’m not sure about my current run. I mean, I may follow the Dam battle with NCR after all, I wouldn’t want to kill them all and they’re clearly a better choice than the Legion. House could use their firepower against Caesar. But my loyalty lies with House. I think he should make the decisions.

I see corrupt governments every day everywhere. They’re a plague to the human race.

It’s a warfare based regime. Look at USA:

Did you know oil lobbyist persuaded the US Gov. to kill the electric car industry for over a century? Well we all know the US Gov. bailed out the corrupt bankers and put hundreds of thousands of people out of their homes, on their asses, bankrupt. Even as far back as the 1100’s when the Arab society was seeing an immense intellectual and scientific uprising, “the powers that be” claimed math books are the work of the devil and that halted their progress by even a millennium and it’s still ongoing. That’s exactly what NCR promises. The rich corrupt interests safely guarded while the greater good is stomped on. They already would back the casino tribe’s interests against that of House and you know this. It’s already started! 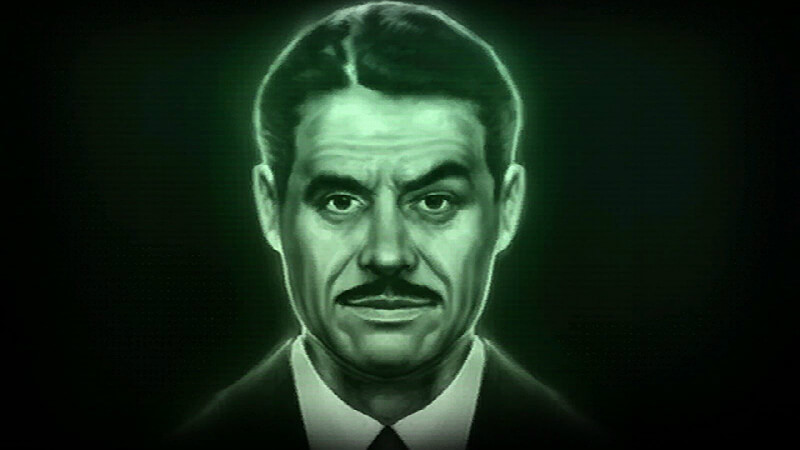 What really caught my loyalty to the House is when he said:

“If you want to see the fate of democracies, look out the windows.”

I did, I actually walked up to the windows of his penthouse and looked out. I was horrified. The quote “War, War Never Changes” struck me!

Anything that was still standing was because Robert Edwin House took out 68 of the 77 nuclear warheads heading for the city. Everything that was broken as far as I could see and beyond, all across the globe, was because of the divisive politics of the old world leaders, politics that NCR and the Legion still sustain.

Politicians will always be dirty, lying, hypocritical ♥♥♥♥♥♥♥s. Put one in jail, 3 more rise up to take his place, his connections, his “benefits”, his power and influence, and they almost always use it for personal gain rather than for the good of the people. And the young ones learn the crooked ropes really ♥♥♥♥ing fast, and they go further than their predecessors. I have worked with lawyers, prosecutors, judges, lawmakers, politicians, mayors. The righteous ones are opposed by the crooked system and removed if they don’t mend. The ones that cede once, will always do it again, once their character breaks its shell and gets infected they have nothing stopping them from failing his or her own principles and values again and again and again, be it for self-interest, political/party interest, greed, blackmail or simple misguidance, with complete disregard to what’s right to do.

They’ll always get rich off of the poor and the sickly, off of the addicts and the meek, through dishonesty and mass manipulation. There are good people in NCR, of course, but then again there were some excellent gentlemen as Nazi officers and colonels in World War II, who were just following orders or those who have had nothing to do with the camps and gassing innocents.

At its core NCR is based on a divisive system, keeping the poor at the bottom and making the rich even richer, way above and beyond the purpose of law, promoting their ranks solely on namesake and affiliation rather than merit. Just like the B.O.S. they don’t give a ♥♥♥♥ about collateral damage and “outsiders”.

In relation to the Fiends or Great Khans, how are the NCR any different than the Enclave? I’ll tell you how: they’re weaker in numbers, technology, and leadership coordination. I’m not saying I would ever side with the Enclave, but at least they didn’t stretch so far as to condemn entire squadrons of their own men and entire towns (like in Nelson, Searchlight, and Nipton) because of lack of manpower and equipment. They were more humane and intelligent than that.

One man can make a difference: one man with knowledge that stretches 261 years, with a scientific mind (father of RobCo Industries), with natural leadership (he’s built the most successful corporation in his name and civilized the casino tribes), with an underlying genius in technology and economy and sheer force of will (he’s looked 200 years for the platinum chip and never gave up on it).

And he’s not a dictator figure. He doesn’t care if people worship him. It’s not his face on the Securitron’s displays. He doesn’t call in people to kneel before him and pray to him and praise him. He stays in all alone and watches patiently from above. He’d rather have the courier take all the glory and get all the praise. He just wants to put people back in their own homes, in schools and engineering colleges, in factories and on the moon.

The others don’t impress me half as much as Mr. House does. 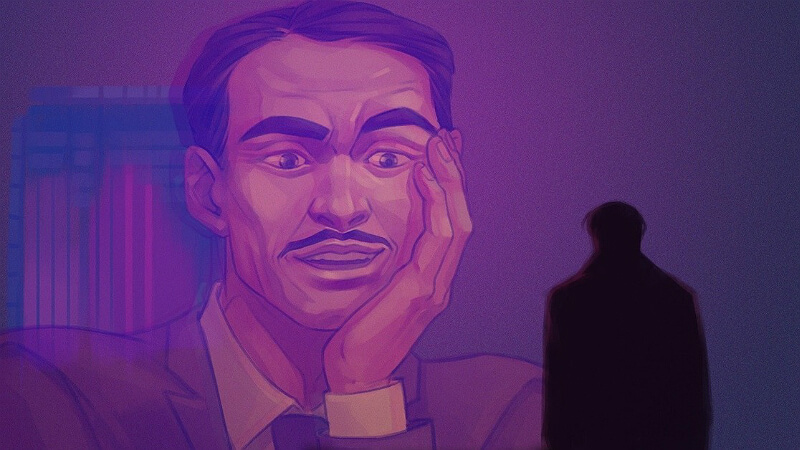 Based on his own words:

“To your untrained eyes, it may look as though mankind is making a comeback. In the NCR, you have something that resembles a nation state. Savage as it is, in Caesar’s Legion, you have an organized society. But neither of these offer a future. They’re regurgitations of the past.”

And they only lead to more war.

If you take Mr. House out of his stasis chamber, he will ask you why you have ruined his plans and he will react differently depending on what you tell him:

I never killed him, but I took that from his Wikia page.

I feel that although he praises “dispassionate calculation” to reach success, a lot of his motivation is in the love for and faith in mankind. He’s seen the horrors and managed the damage and he still believes people are worth saving, that they’re smart enough to handle new technology and that under his leadership he’ll prevent them from using it against each other.

Age and information brings wisdom, and though a lot of Ghouls have rotted their memories along with parts of their brain, his genial brain capacity is ever more extended through the use of his computers. 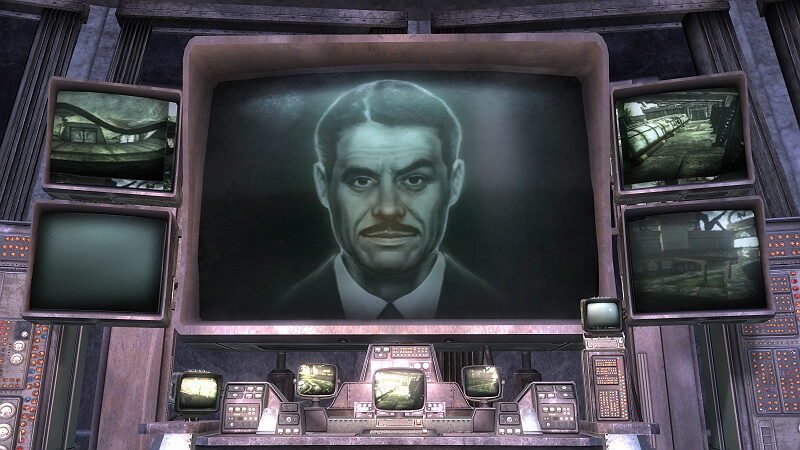 “Lost forever is his bounty of knowledge concerning human longevity, the depth and breadth of which could, as he was apt to say, <fill several text books>. He was not exaggerating.”

I think he really follows the goals of the DC Brotherhood of Steel of fighting the Good Fight, and when he seems like he’s ready to kill anyone opposing him he’s no different than the Knights were, all suited up and ready to battle. But he picked up the savages from the streets and gave them enterprises to run. That’s the most important principle current politicians and those of NCR are forgetting – it’s not about your own well-being, it’s about the current and future generation’s well-being.

Also, I’d like to think I’ll bring even more humanity to his method if I remain loyal to him.
Independently I wouldn’t be able to manage what he does. By his side I could steer him away from unnecessary violence and “dispassionate calculations” that could bring possible negative outcomes, and I will appeal to his reason and intelligence, not to his greed or mercy. He would never cast out a good well formed argument without a better counter-argument and superior calculation. And he’s not above appreciating humanity and compassion.

Yes, I lobby for Mr. House because not enough of you took the time to hear him out and envision his side of the story. Because you’d rather settle for what you know, although it’s utterly broken, than to take into account the risks and rewards of an intelligent, capable, incorruptible mind set on not only ensuring the future, but making it better and brighter than before. 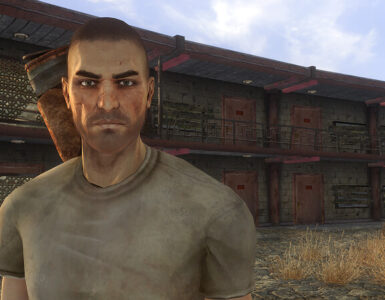 GTAmes
Why Are There No Good Hair Mods for FNV?