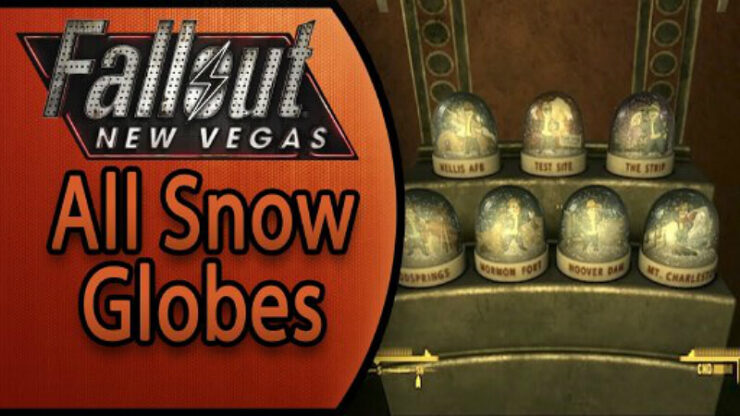 This is a guide on how to find all of the Snow Globes scattered around the Mojave Wasteland in Fallout New Vegas. This guide is aimed a lot towards those achievement hunters out there who just cannot finish that final achievement and find those Snow Globes. Enjoy.

Intro of the Snow Globes

Hey everyone. Have you been looking through your achievements list and seen the achievement for collecting the snow globes? Have you just said to yourself “What the hell are Fallout New Vegas Snow Globes? Well don’t fret, as I now have a guide which will direct you to each location to the precious Snow Globes which once belonged to Mr. House. 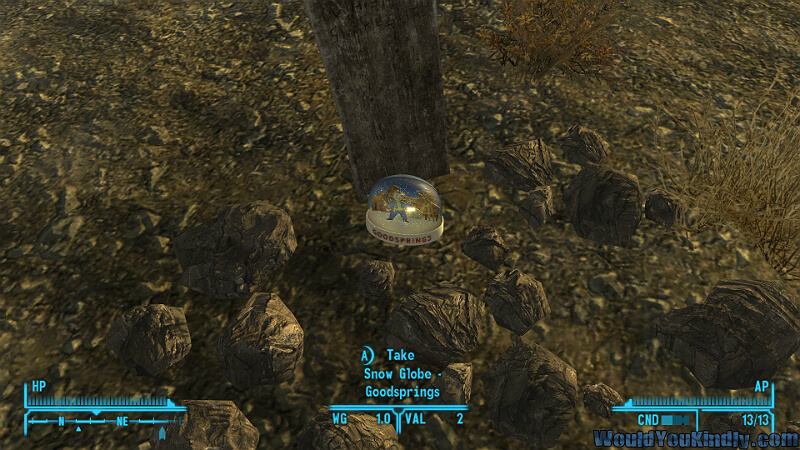 To retrieve the first snowglobe, head towards Good Spring’s Cemetary, just underneath the water tower up the hill behind Prospectors Saloon. When you arrive you will see at the back of the cemetery, a snow globe sitting on a grave. This is the Goodspring’s snow globe. 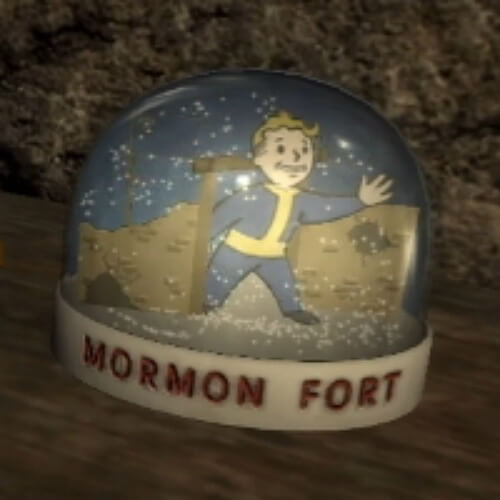 The second snow globe is in The Old Mormon Fort in Freeside. As soon as you enter the door, make a right and head towards the tower. Enter the tower and go upstairs where the Mormon Fort Snow Globe will be resting on the shelf. 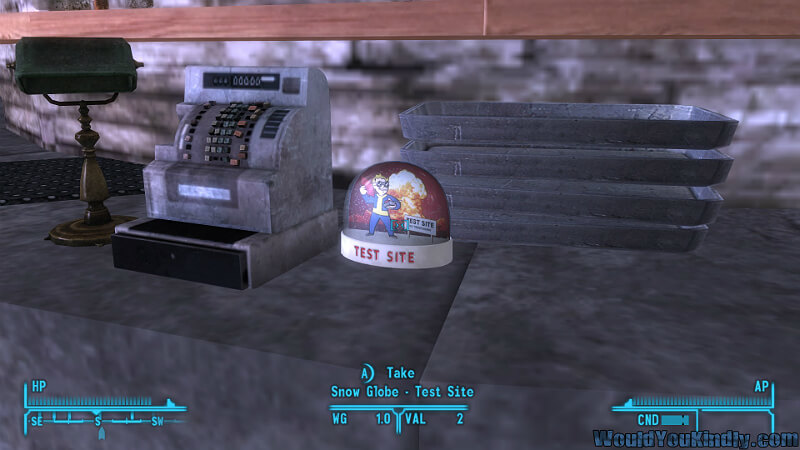 The third Snowglobe is in the Lucky 38 Casino in The Strip. Note: To access the Casino’s cocktail lounge where the snowglobe is located; you need to talk to Mr. House first and start “The House Always Wins” quest. Once inside the cocktail lounge head towards a cash register with a green lamp next to it. Behind the register is the Test Site Snow Globe. 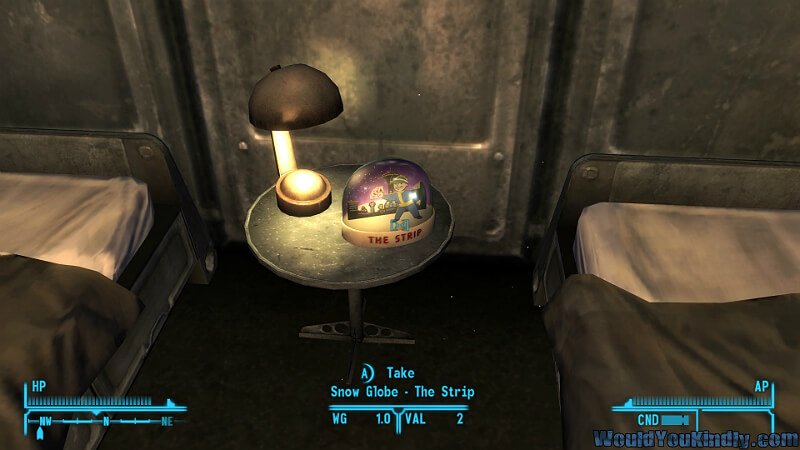 The fourth Snow Globe is at the other end of the Strip in The Vault 21 Hotel. You need to pick pocket the owner of the hotel “Sarah” so you can break into her room and access the Vault 21 Snow Globe. Note: if you have a high enough pick lock skill then you can just pick the lock to her door. This is the most challenging Snow Globe to find. 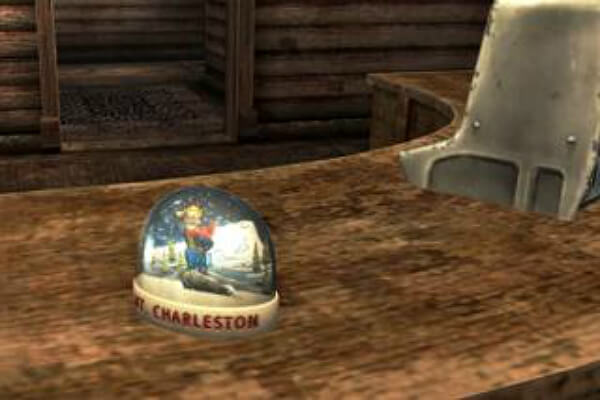 The fifth Snow Globe is in The Jacob’sTown Lodge Reception on the reception desk, easy. You have just acquired the Mt Charleston Snow Globe. 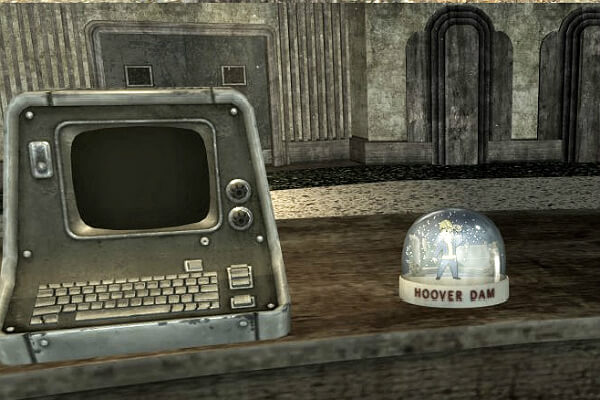 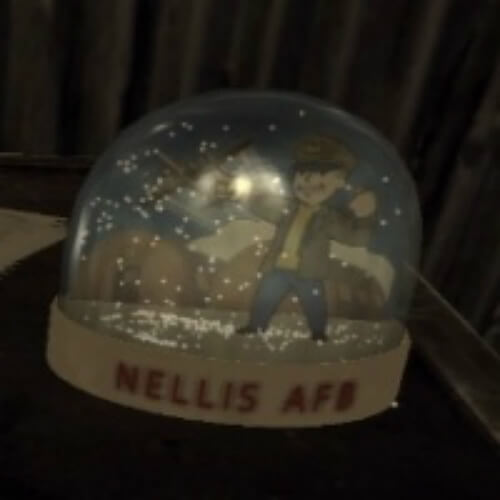 We now come to our final Snow Globe, number seven. This is located in Nellis Air Force Base, AKA The Boomers territory. Note: if this is the first time you got to the Boomers, you will be attacked while approaching the fence by a man with a big rocket launcher. Once inside with all body parts attached, go to the Boomers Museum run by a small child whose name isn’t important because he is a child. The Snow Globe is on the desk as you enter. 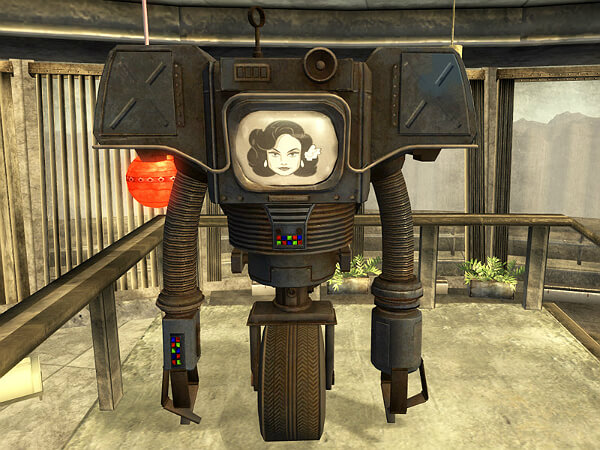 Hooray, you have found all seven snowglobes, You have achieved one single achievement out of seventy-five and wasted a good 15-30 minutes finding them. Do not worry, your hard work has not gone to waste and has paid off when you speak to Jane, Mr. House’s assistant and sex slave, where she will tell you about his prized collection of Snow Globes which went missing before the Great War. Once you activate this side quest, you can give her the snow globes for 2000 bottle caps each. 14000 caps in total. Also, Jane puts them in the Presidential suite, your room in the Lucky 38, lucky you, where you can watch them every day until your little heart’s content.

Thanks for reading this guide and if it reaches a lot of likes and followers I will make more for you Fallout New Vegas lovers. In the meantime, have a great time playing and thanks for reading.

GTAmes
Which faction should I side with? Pros and Cons?