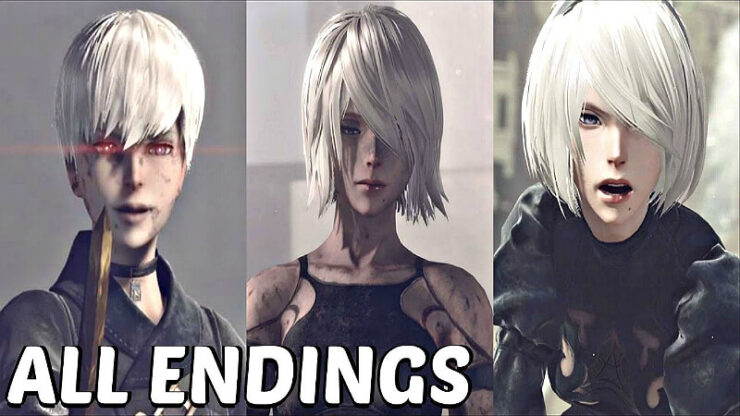 There are multiple endings to the game, and seeing them all requires multiple playthroughs. You will find a guide to achieving each ending below.

Ending A: flowers for machines

Play through the game for the first time and complete all of the Main Story Quests.

Ending B: or not to be

Load the cleared save from beating the game once and earning Ending A. Play through this playthrough and complete all of the Main Story Quests to achieve this ending.

During your third playthrough, choose A2 during the final boss. Then select the dialogue option “No” to POD’s request during the end credits.

During your third playthrough, choose 9S for the final boss battle. During the text portion, you’ll have 2 choices: “I’ll go with you” or “I’ll stay”. Choosing either results in this ending.

Ending E: the end of yorha

After earning endings C and D, finish the game once more as either A2 or 9S. During the credits, Pod will speak up. Accept the option that says you wanted them to live. You’ll then play through a bullet storm mini game. Make it to the end and beat it to unlock the ending.

In chapter 01-03_2, after Engles knocks 9S onto it’s back, fail to repair your system by letting the timer run out.

Right after Ending A, when you begin the second playthrough walk 9S to the crane and neglect the mission.

Ending H: a mountain too high

Leave the area when the Goliath is in the city, thus abandoning the mission. Attempt to go to the Amusement Park instead of the City Ruins.

Ending I: no in team

In your first playthrough, defeat the boss at the Copied City and then walk away from 9S.

Complete the Jackass mission in the desert. You’ll receive an email from Jackass then about a fish. Speak to her at the Desert Camp to obtain the Mackerel Key Item. Eat it to earn this ending.

Don’t go to Pascal’s Village when it’s attacked while playing as A2. Running to the Factory instead should trigger this.

Destroy every machine in Pascal’s village.

Ending O: just you and me

When 2B is struck with an EMP and YoRHa units are infected and attack 9S, run away from the fight.

In chapter 11-07, don’t go to 2B’s location near the commercial facility. Heading to the desert area instead should trigger this ending.

During chapter 14-05, attack the peaceful robots by Pascal.

Abandon Devola and Popola when they are protecting you while you are hacking the tower.

To earn this ending just remove your OS chip.

To earn this ending, activate your self destruct while in the Bunker.

You can earn this ending on your third playthrough. When you have to hack the tower with 9S in chapter 17-01, don’t. Instead, keep fighting the waves of energies with your allies until they fall.

In the prologue when 2B flies into the factory, let yourself get killed by the giant laser/Die during the prologue in general.

Don’t help 2B as A2 when they meet at the commercial center close to full virus contamination.

Allow Emil to self destruct at the end of the boss fight in the quest “Emil’s Determination”.

Kill Pascal after saving her as A2.