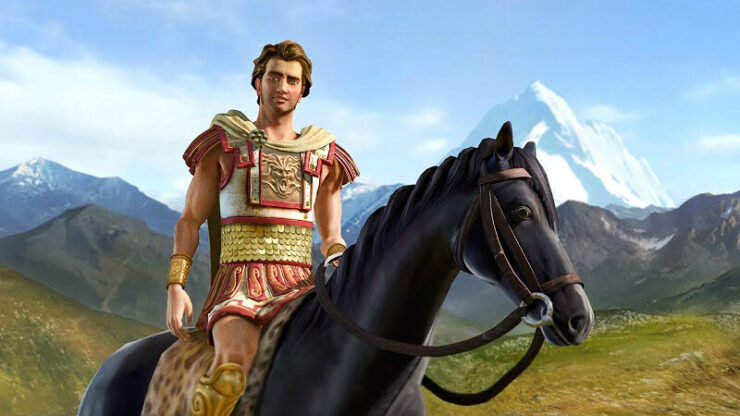 Greece as led by Alexander

Hellenic League: Influence degrades at half the normal rate and recovers twice as fast. Units ending their turn within the borders of a non-friendly city-state will not cause to decrease, and Greek units within city-state borders heal as though they are in friendly territory, regardless of relationship.

A rather uninteresting unique unit, but a useful one all the same. The Hoplite is a spearman replace with the same 50% combat bonus vs mounted and a slighter higher combat strength of 13 compared to the strength of 11 of the normal spearman. Regardless, the Hoplite remains an effective unit for clearing barbarian units and camps, defending cities or even tanking hits for the early warmonger.

A stronger and faster horseman with the added bonus of the Great Generals I promotion. Companion Cavalry have acombat strength of 14, compared to the strength of 12 belonging to the regular Horseman. They also have an extramovement point, one of the most mobile units in the early game. They also retain the move after attack promotion of the regular horseman, so the extra movement point allows them to move in, attack and then move out of range of most early game ranged units, and also helps the Companion Cavalry to sweep in and take a city after it has been weakened by ranged or siege units. They do, however, also retain the combat penalty vs cities of the horseman.

For this section, I’m going to refer you to the excellent Steam guide regarding Greece by /u/Zigzagzigal – a guide which includes things to avoid, advice regarding policies, how to get the best from the uniques and even ways to counter Greece! It’s a guide which I would highly recommend for anyone wanting to learn more about and optimise strategy when playing as Greece!