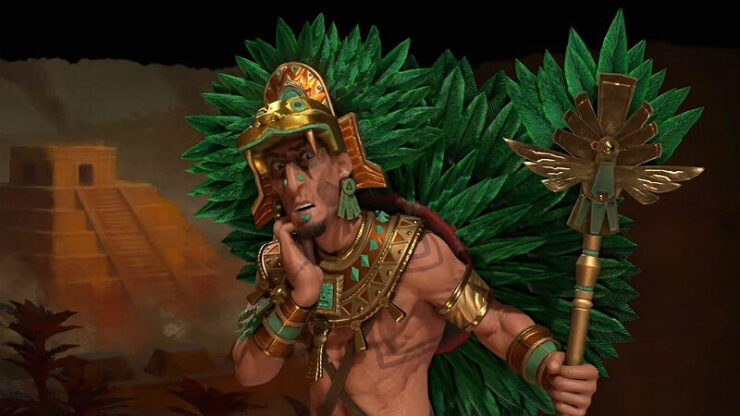 The Aztec as led by Montezuma

Sacrificial Captives: Gain culture for the empire from each enemy unit killed.

Offering the same combat strength of 8 as the regular Warrior, the Jaguar is a replacement available right from the get-go with three bonuses which are kept on upgrade. The first of these is that these units have a 33% combat bonus when fighting in either forest of jungle, meaning they can be useful for early defence when coupled with the Aztecs start bias. In a similar vein, Jaguars also start with the Woodsman promotion, meaning they have double movement points when travelling through both forest and jungle. This promotion makes earlier scouting a lot easier as the Jaguar has mobility close to the levels of a scout. Finally, these units heal 25HP for every kill they score, a bonus useful for both defence against barbarians or invading other civilizations.

Costing the same number of hammers as a Water Mill at 75 and with half of the maintenance cost at 1 GPT, the Floating Gardens are a direct upgrade. They retain the +2 food and +1 production of the regular Water Mill, while also offering an additional +15% food in addition to +2 food from every worked lake tile. It’s also worth noting that this +15% bonus is directly to food, and is not just a growth bonus. Like the Water Mill, the city must be built on either a river or lake to be able to build one of these. This building allows normal lake tiles to give 4 food each with no improvement necessary, the same as a grassland farm boosted by technology. Play on an Ancients Lake map for maximum population boost!

For this section, I’m going to refer you to the excellent Steam guide regarding the Aztec by /u/Zigzagzigal – an article including guidance on how to use their uniques, which policies are good picks and even ways to counter AI Montezuma! It’s a guide which I would highly recommend for anyone wanting to learn more about and optimise strategy when playing as the Aztec!