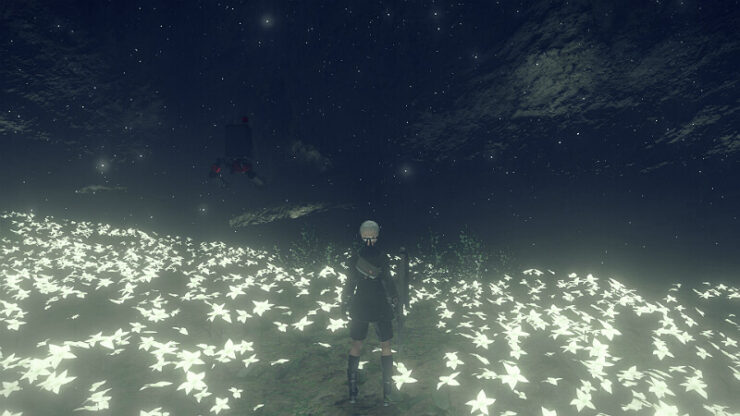 The endless cycle of war between Android and Machine has been broken. Our heroes have been uploaded to new bodies. Despite the odds, Nier: Automata had a happy ending… or did it?

The chances of Yoko Taro making a direct sequel are almost zero, that’s just not his style. So let us speculate what happens after final ending E.

Let’s start with what we know for sure. YoRHa is destroyed. The core of The Machine network has left Earth. As the Ark is leaving, a scene shows us The Resistance members looking up, and another shows Pascal also watching. Then we see several Pods while 042 and 153 chat, then 2B, 9S, and A2.

It seems reasonable to say that there is a Pod Network in effect, possibly the only functional network left. Presumably, the Pods would continue their basic mission of being helpful, though they may be more autonomous than they were before since there is no YoRHa to direct them, and they are gaining independent sentience. Given time, the Pods/Network could become a powerful force.

042 and 153 say that the entire memories of our heroes had been uploaded into the new bodies. Assuming that is true…

A2 is a survivor, she’ll be fine. Now that she’s no longer being hunted, she’ll probably join Anemone and the former Resistance camp.

2B/E and 9S is where things get tricky. With 2B/E it depends if she can overcome her order to execute 9S. Remember, the last thing she said when A2 killed her was “take care of 9S” – this could be interpreted two ways: one would be to help 9S, but after learning the truth about 2E, it becomes possible she meant “take care of” as “kill.”

9S is the real hard one. When we last saw him, I would call it fair to say he had gone insane after learning everything he believed in were lies. Would he be able to overcome the many blows to his psyche? Or would he lash out (possibly attacking 2B), or run away? Assuming the boy doesn’t get himself killed, he’s going to need a lot of therapy.

It’s certainly implied that our heroes are the last YoRHa units left. But isn’t it possible there are others scattered around? There were the two drug addicts by the oil field, 4S in the castle – they may have escaped the logic virus since it seems units in the field are not always connected to the network.

What of the YoRHa units that were infected? If any of them survived, did The Machine core deactivate the virus when it left, or are they still out for blood (or oil, or whatever)? If the virus was deactivated, are the units’ memories still intact? Or, did The Machine do a ‘mercy killing’ on the way out?

With the Machines it’s a similar situation – how many are left? Of those that were still connected to the Network, are they now free of being psycho killers? Are any who had disconnected from the Network previously still left (besides Pascal)?

We saw people in the Resistance Camp watching the Ark launch. As the Resistance was composed of older, pre-YoRHa androids, any survivors should be fine. Depending how many Machines are left, they could now be the dominant force on Earth.

Speaking of older models… it is implied that Devola and Popola died at The Tower. But isn’t it possible that, against the odds, they managed to survive, or could be repaired and reactivated? It’s also possible there could be more Emils scattered around the globe.

My guess what happens after – A2 makes her way to the Resistance camp and starts helping out. There is no need for a ‘resistance’ anymore, so they relocate to somewhere they can set up a proper base of operations. After realizing the war and YoRHa is over, unit 2 doesn’t want to be an executioner anymore, and decides to be just 2B. 9S is broken inside and unstable. It’s about 50/50 whether he runs, or just sits and does nothing. Devola and Popola are able to be repaired, and with their help 9S slowly gets better (he certainly won’t trust 2B any time soon). Pascal’s memory may have been wiped, but the ‘heart’ is still there, and so becomes a leader for peaceful Machines. The Pod Network becomes a major form of long distance communication between individuals and groups. There are still some hold-outs who cling to the old conflict, and there are some who have selfish motivations, both Machine and Android – so it is not an entirely peaceful era, but overall it’s an era of rebuilding and establishing a new society.

And who knows… maybe, sometime in the future, the society would have advanced enough to create an android called Accord, and send her back, across multiple timelines to observe. 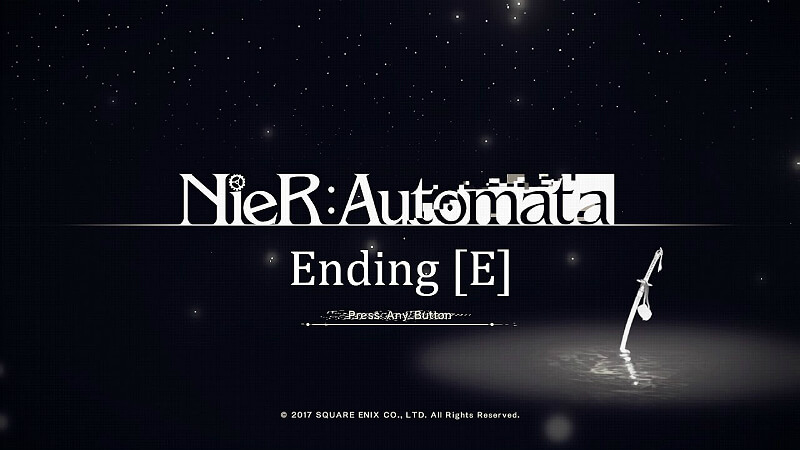 My take is that A2, 9S, and 2B stick together in the end. They have nowhere to go other than the resistance camp, and they’re free to do as they please. So it makes sense they’ll decide to help the other remaining androids rebuild.

So that’s why I’m sure they stick together to help the resistance rebuild and prosper for whatever the future awaits for them.

On the other hand:

All of this, that is, until roughly a few centuries in the future, since we know (According to the Emil Heads weapon story) that the machine network has managed to rebuild itself and regain gravity-controlling technology. New machines could be created, and the existing independent ones could be once again forced to join the network and therefore be controlled (or simply subdued or erased, which hopefully our heroes will fight to prevent. Seeing how the network fought itself over destroying the Androids or not in A2’s route, we know there’s still chance for conflict even though the Machine Network that left in the Arc moved on from fighting the Androids/Humanity)

And lastly, #2: Remember that the YoRHa Project was just that: A project. Just like A2 was an experimental android to gather data for the YoRHa project, this in turn was also a step towards the next generation of androids (Which is why any trace of YoRHa/The Bunker was meant to be erased, just like A2 and her team) and just like we never knew precisely how Devola and Popola arranged new “births” for Replicants in the first NieR since there was a whole system behind it unknown to everyone else, we also don’t know exactly who or what is in charge of that new generation of androids, but we know it/they exist somewhere else.

So, to summarize: A2, 2B, and 9S stick together alongside the resistance in order to rebuild, until centuries in the future, the machine network restores itself, 2B meets an Emil once again, and.. Something happens. And during that time, or before that, the next-gen Androids show up. How that will affect the heroes, I don’t know. But they could always blend in within the Resistance, so. A lot of things could Happen.

GTAmes
Heritage of the Past – Relic Locations – Nier: Automata