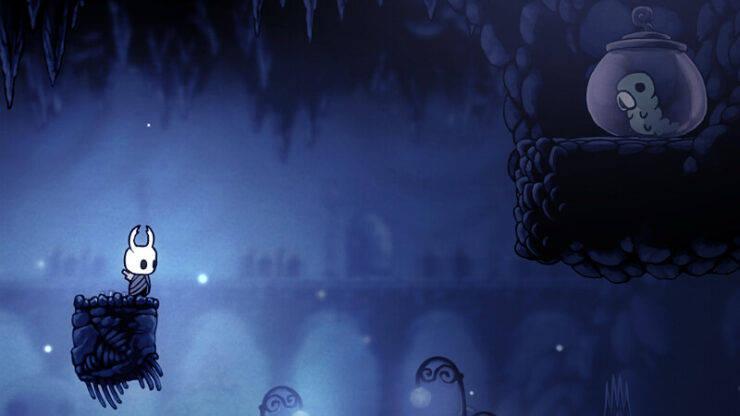 I honestly feel that that the ending for collecting all the grubs is an awful ending, not only story wise, but also a mean kick in the stomach to the players that honestly decided to pursue these creatures in order to save them.

You see, imo I think a game should try to immerse you into a story, to make you care for their characters and the world that surrounds you. If you are talking about Hollow Knight, a game that clearly prefers the subtle way of telling the story of the game trough its visuals and few dialogues, then I think it’s primary focuse should be precisely that, to engulf the player into it’s world.

The Grub ending has got to be one of the worst decisions that was iput into the game, since it completely removes you from that same immersion making you feel that all the work you had so far, all the hours you putted into the game searching for these creatures, were a waste of time. It reminds you that this is a game and that decisions were made when making this game. And if I am thinking that this is the case, then it’s because I am not immersed, it’s because the game lost me completely.

The world of Hollow Knight cleary presents this “end of the world cenario” where everyone is pretty much infected and gone insane. Along your adventure you start finding these baby creatures, grubs, that are stuck inside containments. They are clearly trapped, and sad. When they see you, they get immediately happy, as they say a ray of hope that they might be freed. It’s difficult not to get attached to these little creatures. So in the early of the game there is a place with an old grub, that must be their grandfather or something, with a lot of tiny “houses” where the baby grubs live. No dialogue is presented, but you get the clearly get the idea. Find these poor babies, release them and send them back home.

So your journey starts and look all around for them in the hopes that these creature will finally be safe. And you do so… and the reward you get from collecting every grub is that the old caterpillar eats all the babies, making all the work that you did feel useless.

I have seen a lot of arguments brought up because this is supposed to be a metamophorsis, so a next stage for the Grubs per se, because that is the name achivement for completing this storyline is called. But here is my problem with this:

1. It’s lazy writting. An achivement is supposed to be an outside reward from the devs from completing certain tasks, and appearently here it is used as a way to tell the players what happened.
2. If it is indeed a next stage, why do you never get to see it? Your last image is from an old larva satisfied that he eat every baby. There is nothing after it. Why not show him getting t turn into another thing?

The achievement explanation seems like an bad excuse from the devs to say “Hey, we know you went through all this work and this is what you get in the end, but don’t worry, it’s just a metamorphosis”. But the deal, is that there was no need for this. You could have just left the babies all happy and that’s it. No special ending, nothing. There is no need to do any of this.

But let’s say that you want to give these babies a tragic ending, because Hollow Knight loves those and only 2 of these deaths were actually emotive. Why not have the babies get consumed by the plague? Heck, is it ever explained why they weren’t infected? Why not have them all leave so they are not in danger? Instead you give the concept of a metamorphosis that, for the record, is something that happens individually, there are no species that actually eat their babies in order to transform.

I guess my real problem is that this is not a character side quest like Quirl’s story or even Cloth’s where finding this characters is something that is already pre-written so you are bound to find them. In this quest, you need to activily search for these babies just to get to this finale. These are 40 hours of work, on a blind run with no previous knowledge of anything, just to find them to get to this ending. And let’s be real, was anyone here happy when they found out that their entire work was for this old ♥♥♥♥ to eat every single baby?

To make it worse, the devs don’t even give you the satisfaction of killing this ♥♥♥♥er, he is just there, all happy and satisfied. They take away everything from you. It’s the same deal with Yume Nikki where you waste your time looking for a bunch of items in a surreal world just for here to kill herself in the end. Am I supposed to feel accomplished? No, I can’t see this in any other way the a “design choice” from behalf of the creators.

The story with the collector and what not is actually really great, but it doesn’t change the fact that we had to go through 40 hours of work for this. Make a side story for this with a grampa and a grandson and the collector.

Also, another that amazes me is that the Grubs were suppose to be the mascot of the game. In the special edition they gave you a plushie of this characters. So why even give them an ending like this? Was it to be dramatic? I felt enraged not sad. I felt that going to look for these guys was a waste of time, time I could have putted into playing another game. I delt with every hardass boss fight you threw at me and always felt accomplished. But this? Were do I get the joy from this ending?

Hollow Kight is a great game, but blindly defending every choice the creators make is not good, and this was something that had no reason to be done. It didn’t make me feel touched, it made me feel unaccomplished.