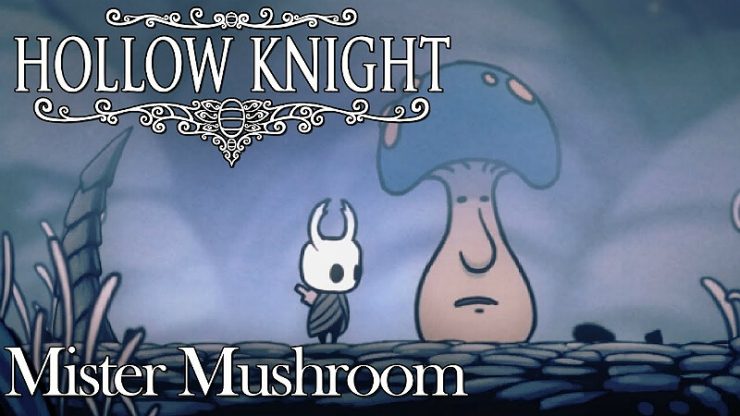 This is a guide – that’s still work in progress – regarding one of Hollow Knight’s most mysterious and best-hidden secrets: Mr. Mushroom. This guide rather aims at giving you the needed hints and figuring it all out yourself and therefore includes a lot of spoiler tags. Although the goal is to finally add a section about every exact location including screenshots. 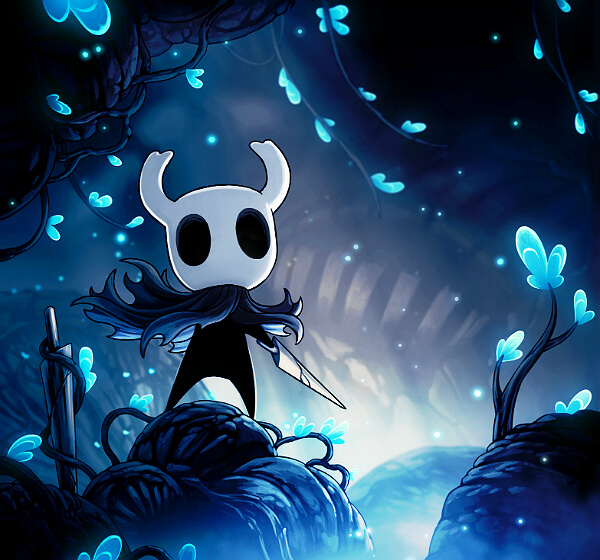 “…Wyrm’s pull bugs into their thrall,
Till ages pass and kingdoms fall
Caps and shells may fall to dust,
But Mr. Mushroom readjusts…”

This will be a guide regarding one of Hollow Knight’s most mysterious and best-hidden secret: Mr. Mushroom. This guide rather aims at giving you the needed hints and figuring it all out together with the community, instead of just spoiling it by telling everything. 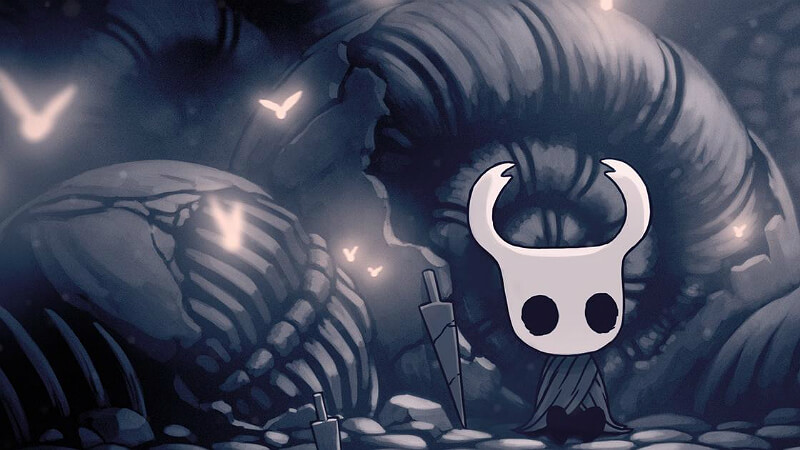 Doing this questline unlocks and awards the »Passing of the Age« secret ending cutscene and the associated achievement.

…and the meme, obviously! Do it for the meme! Don’t let your memes be dreams! 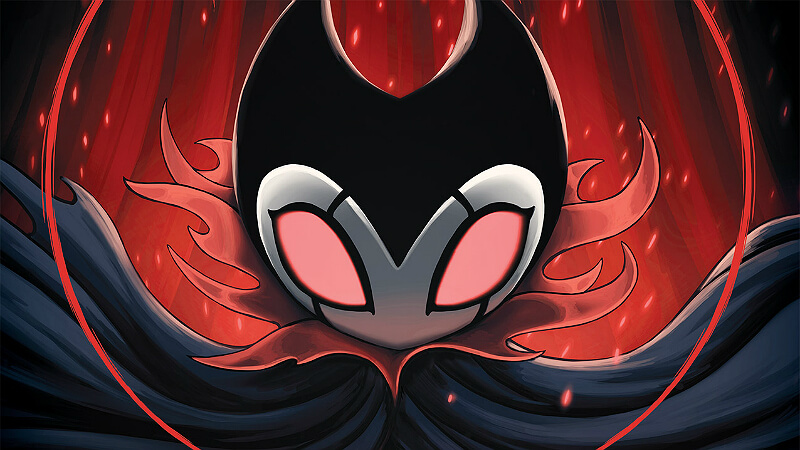 The following text is a quote of the inscription from a secret stone tablet found in a hidden cave in the bottom-right corner of Kingdom’s Edge, that can only be read when wearing the Spore ShroomCharm. It not only hints every location of Mr. Mushroom, but also the exact order in which he has to be visited and interacted with – still having the same Charm equipped.

We speak the path of the Master Herald,
he who would signal an Age’s end.

Spawn of self, their minds unite,
Aside the source of acid blight,

Monarchflys in air set still,
To Root’s domain and snail once shrill,

Path of Wyrm, at new lands entered,
There journeys end. The kingdom ventured.

We speak the past of the Master Herald, = location(s) of Mr. Mushroom
he who would signal an Age’s end. = cyclical world?

Spawn of self, their minds unite = Fungal Wastes
Aside the source of acid blight, = next to Isma’s Grove 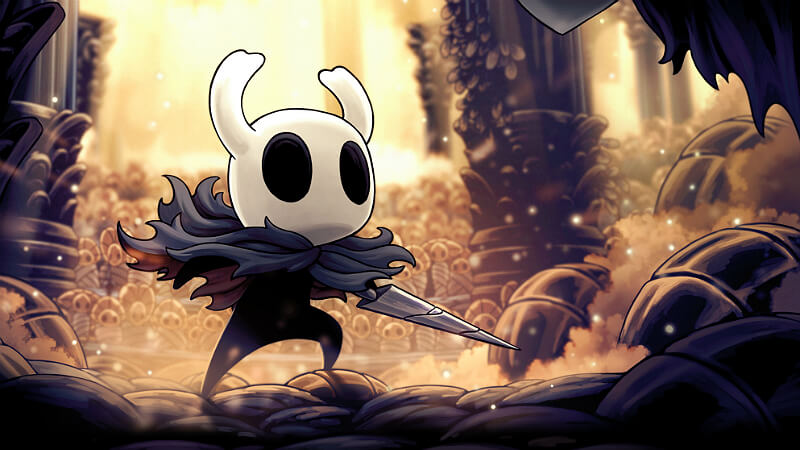 After defeating the 3 Dreamers, Mister Mushroom will start appearing in various locations of the map, interacting with him in every location will unlock the »Passing of the Age« achievement and associated secret post-credit cutscene. To interact with him you just have to hit him with your nail, making him look at you.

You will find Mister Mushroom standing right where Cornifer used to sell his map. For the quest to start, you will need to equip the Spore Shroom Charm before talking to him. If you interact with him without it, you won’t understand what he’s saying – only gibberish – and the quest won’t progress.

Talking to him with the Spore Shroom Charm equipped will trigger the following dialogue:

This is believed to be a reference to Team Cherry’s previous game called »Hungry Knight«, in which a character resembling Hollow Knight’s protagonist has to kill 3 masked bosses, who look a lot like the 3 Dreamers.

…Shouldn’t trust the eye they gave you. Rely on your own instincts.
If you’ve got a keen nose, use it.
And while you’re hunting for secrets, beware those who are hunting you!
…Oh. Excuse me.

…The dead can’t make use of wealth in any case. What would they spend it on?
Yes, a big brood like that. They need food. And shelter. And toys.
If you keep some for yourself… Well, I think you deserve it. Yes…
…Oh. Excuse me.

…What was called a “hero” in its moment may be called something very different after time has passed. The crimes and triumphs of our predecessors echo all around us, don’t they? The chains of fate that bind us all together… do you really want to break them?
…Oh. Excuse me.

…Well if things are getting too dangerous down there, maybe it’s time to take a break?
Come back up and spend some time hunting, or gathering, or wandering aimlessly.
No, not too much longer now…
…Oh. Excuse me.

…I haven’t seen her, no. I’m sure you’ll remember where you left her eventually.
Trust the moon, or yourself. Or trust her. You need to trust something, that’s my point.
Hmm? No, not him. No. Absolutely not.
…Oh. Excuse me.

…It’s not by tools that you’ll triumph, it’s through your smarts, your speed, your determination…

…Oh. I see. So you’ve been following me around then?
I hope my travels haven’t confused your own, distracted you.
Then again, a meandered journey still has meaning.
It is, after all, from a journey we find our purpose,
though a stop is more than just a stop.

And my if those stops can’t be lovely things, wouldn’t you say?
Transcendent plateaus, distant sandy lands, vast ancient kingdoms.
Yours was not the first, nor will it be the last, but it’s a unique and special thing nonetheless.

Now, with my duties here finished, it’s time I made graceful departure.
Till next time my friend. ‘Tis a long road we tread, but a joyous one.

Until our paths cross again… 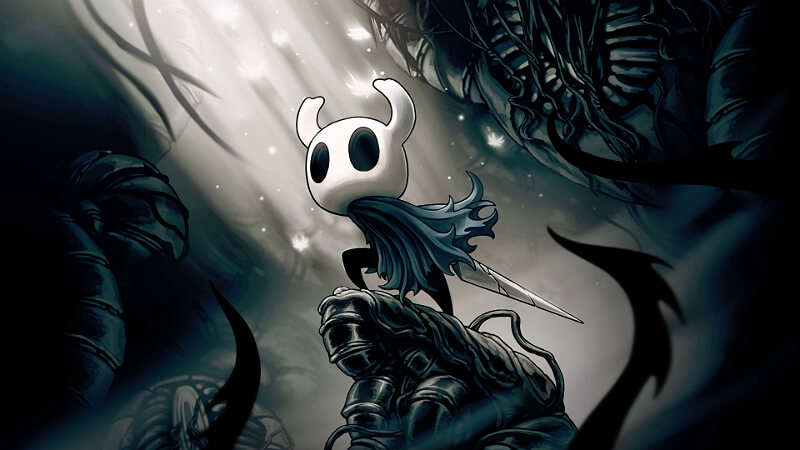