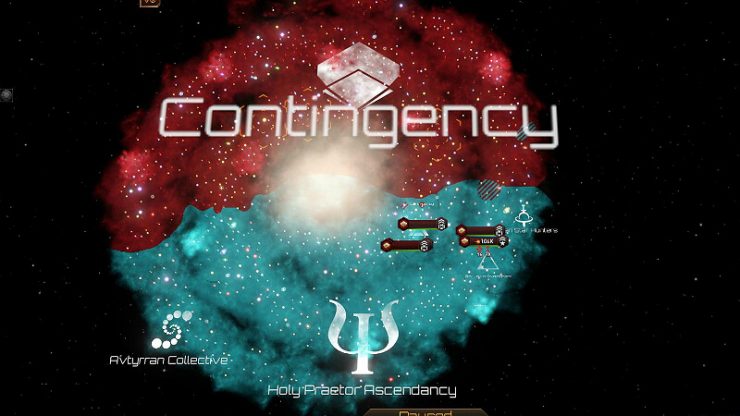 So there I was, king of the galaxy. My first time making it past mid game. I tried to play tall and seemed to succeed. I built no mining stations and rushed habitats. My empire had at least a habitat or colony in every system I owned. I turtled a little bit and put giant citadels with hangars, missile defenses and ion cannons all along my borders. The best part is that I put gateways at each and every one of them. I built a 100K fleet in the middle of my empire and could easily bring it to any choke point with a 45K citadel. Even AEs couldn’t get passed my borders. I was superior to every single empire in both tech and fleet strength by mid game. I was so proud of the empire I built. I was starting to think that I had the difficulty down too low when I decided to research AI…

That’s when it came. It started with some weird messages about erratic behavior from my synthetics that I had recently gave rights to. I was thinking this was just a simple mission of some kind from giving them rights. Like Id have to do something to appease my newest citizens and then not have to worry about it anymore.

When contingency hit, I was cocky. Some computer with floating tubes telling me it’s going to exterminate me when not even AEs couldn’t break my impenetrable borders? Give me a break.

I was more than a little shocked when I told it to go F itself and saw that all of my resources were in the red. I was a super rich empire after all and I got used to a certain standard of living. No matter, if that’s how this contingency thought it was going to bring me down it had another thing coming. I sacrificed some of my bountiful science research to build some extra mines and power plants. I had plenty of stored up resources that even getting close to a small net positive was fine for me. I was still cocky.

I was cocky the whole time I sent my 100K fleet after their stupid little hubs. I was still cocky when I saw their first couple of roaming fleets (70-80K). I was slightly humbled when my 100K fleet was only able to take their 77K fleet down to 15K before they were pretty much obliterated, but still head strong. I knew I could send waves of fleets to any part of my borders easily and that as long as my defensive stations were still up, I was fine.

I tried everything. I googled, reloaded old saves and tried to prepare, I made special ships for just beating the contingency (and spammed them to no end), I tried hit and run tactics, I took out construction ships, I jump drived to their hub and smashed my head against the wall repeatedly against their 200K defense fleets, but ultimately, they always crushed me.

I hoped the cybrex would save me. They didn’t. I got one of their fleets before they succumbed to the contingency. I took back very little precious territory from it. The end was inevitable. My galactic castle of study was ripped apart by the AI in a 4 X game on the easiest difficulty setting. I have never been more humbled. I love this game.

I’m starting a new map, perhaps I will take the crisis difficulty down just a smidge and up the gameplay difficulty just a little bit.

Thanks for letting me vent and tell my story.