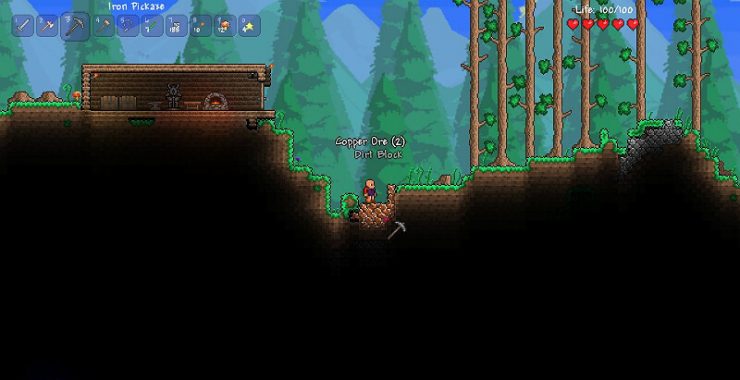 Back in the days before 1.2, every Terraria world had the same ores; Copper, Iron, Silver, Gold, Demonite, Cobalt, Mythril, and Adamantite. Nowadays, when a world is generated, there’s two ores for each “tier”, and one of these ores is chosen. The 1.2 metals have different stats compared to the metals of the old, and this post is a bit of a comparison between the two. Something that is immediately noticeable, is that in almost all cases, the 1.2 ores are preferable.

Beginning with the oft skipped tier, copper and tin are both almost entirely obsolete because better equipment is available at the exact same time. Tin equipment is better than copper in every way. The tin weapons have superior stats, usually with a +1 more damage than their copper counterparts. Tin tools have better tool power, except for the Tin Pickaxe, which has the same power as it’s copper twin, but doesn’t have the range penalty of it. Tin armour is also better, having 7 defence when all pieces are worn, which is one more defence than the 6 granted by copper.

Now moving onto the next tier of metals, which are both nonsensical materials for creating tools out of, and is yet another tier made almost entirely obsolete by the wood acquired from trees that have been twisted by the evils of the world; iron and lead. The difference between iron and lead is almost the same as the difference between copper and tin; lead weapons have +1 damage against iron, the toxic metal’s tools have very slight increases to their tool power, and the lead armor that will likely drive a man mad also has an increase in defense, having +2 defense at 11 when put next to iron’s 9. It should be noted that a lead broadsword is identical in stats to that of one made of silver, despite being a tier below.

Here comes the slightly more shiny metals, ones which are starting to be worth actually making. Silver and Tungsten are a bit more interesting than the previous tiers. The tungsten tools all have +5% more tool power than the silver tools which is more noticeable than the previous differences. The Tungsten Pickaxe is actually worse when it comes to mining stone than a Lead or a Silver pickaxe, because although it will take one less hit to break the block, the Tungsten Pickaxe has a slower use time. Tungsten Pickaxes are still however faster when mining anything else. Tungsten weapons still have the standard +1 damage over silver, and the armour has 15 defence rather than silver’s 12. 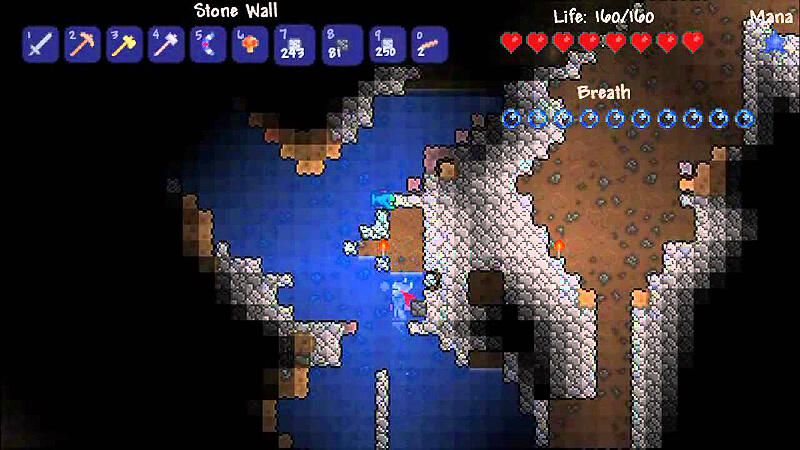 The precious metals that I seriously doubt would be effective as weapons or tools, the blingiest of the pre-hardmode metals, gold, and platinum, are where things are really noticeably different. The Platinum tools have 4% more tool power over gold, except for the axe which has 5%. The Platinum Broadsword has 2 more damage than a golden one, with the staves and bows mimicking this bonus. Platinum armour has 4 more defence than the golden armour, making it much better.

Mystical metals that aren’t real, twisted by the evils of your world; presenting to you, Crimtane and Demonite, ores that are obsolete because of fishing. Crimtane and Demonite equipment goes back to being similar in stats at first glance, but they have clear differences. The Crimtane Pickaxe is faster and stronger than the Demonite one in all cases, while the axes and hammers are identical in stats as tools. The Blood Butcher and Light’s Bane are different, the Blood Butcher gives increased damage and range with a slower speed, while the Light’s Bane is shorter range, lower damage, but attacks quicker, meaning it’s up to one’s preference.

Crimson and Shadow armour have the same defence (19), which is worse than platinum, but they trade this for helpful set bonuses. Shadow armour gives a 15% boost to movement speed, as well as each piece giving +7% melee attack speed (giving a total of 21% extra). The Crimson armour gives greatly increased life regen, which will regen life at a different speed depending on if the player has taken recent damage and is standing still. Each piece gives a +2% boost to weapon damage, giving you 6% more damage while wearing the whole set. It’s also up to personal preference for these two, as they favor different ways of playing.

I wonder if I could just throw in a paragraph that has nothing to do with the rest of the text and have anyone notice. Considering the literacy rates of the Terraria community, I have doubts many will even make it this far before having a mental breakdown from all the words. Congratulations to the few that even read this, regardless of if you read anything else, you’re special. Here’s a bunch of random♥♥♥♥♥♥♥ Becquerel radiation seventeen Terraria ore and methodically knocking people’s hats off Undertale whale dolphins Rapture. 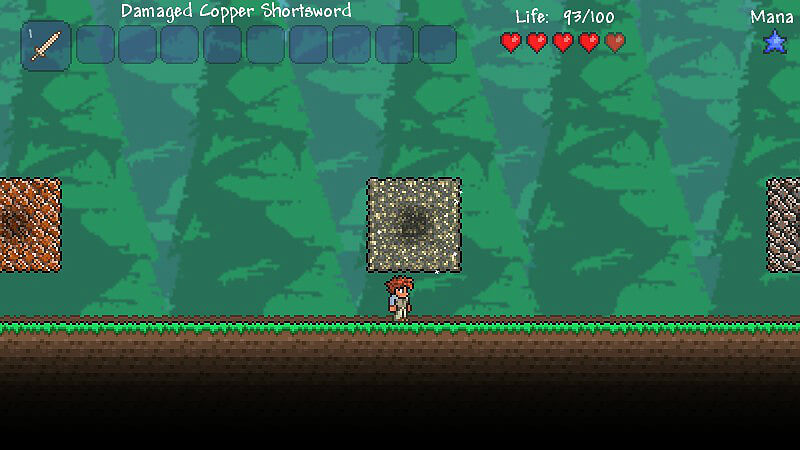 The starting hardmode ores, that are bright colours they aren’t in real life, Cobalt and Palladium. Palladium gives a higher defence bonus with all of it’s helmets, and has better boosts to your stats offered by the armour. Set boosts offered by Cobalt are just generic boosts to your stats, while Palladium gives you a unique bonus; after hitting an enemy, for five seconds, you’ll get an additional 3 health regen every second, which isn’t the best regen, but is certainly better than nothing.

Orichalcum and Mythril, the two fantasy metals, are a similar story. Orichalcum gives overall better bonuses to stats from individual pieces, but the Mythril set-bonus gives a stat boost. Orichalcum armour gives the set bonus of shooting a petal at enemies while you attack them. This is a great boost to damage, even though it has a ~1 second cooldown. This petal is also very useful against the Destroyer because it can pierce infinitely, giving it a chance of hitting a lot of segments at once.

Orichalcum pickaxes have a 15% higher mining power than Mythril Pickaxes, while the axe has 5% higher than mythril. The weapons of Orichalcum are also ever so slightly stronger than Mythril ones, once again making the 1.2 ore better than the ore of old. 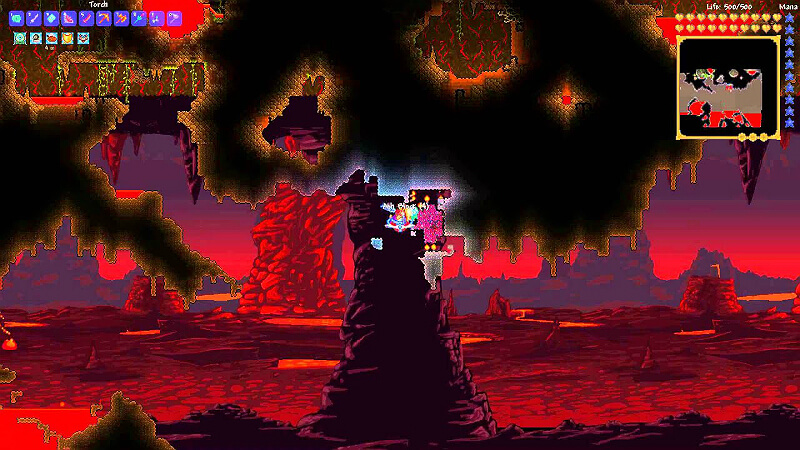 Adamantite and Titanium equipment changes things up a little. Titanium still has more desirable stat boosts, but Adamantite armour gives higher defence overall, although only slightly. Adamantite still has generic stat boosts for set bonuses, while Titanium gives an interesting effect. It gives you the “Shadow Dodge” buff, which is applied after striking an enemy, and lasts for 30 seconds. During the time of the buff, the first time you take damage will be completely negated, and make you invulnerable for 2 seconds.

This buff has a cooldown of 30 seconds after it gets applied, meaning you’d have to wait until the time that it would have worn off if you hadn’t got hit. The Titanium pickaxe has 10% higher mining power than the Adamantite one, and the Titanium Axe has 5% higher axe power. The weapons again repeat what has happened before; Titanium weapons having slightly higher stats than Adamant weapons.