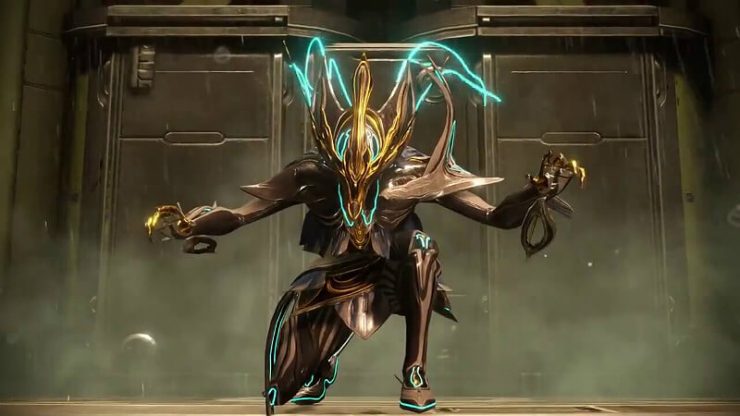 With this build, you shall allow your team to deal massive damage over a very long period of time if used properly thanks to a single mod that takes the Sonar ability of Banshee and amplifies its efficiency by an overwhelming factor. 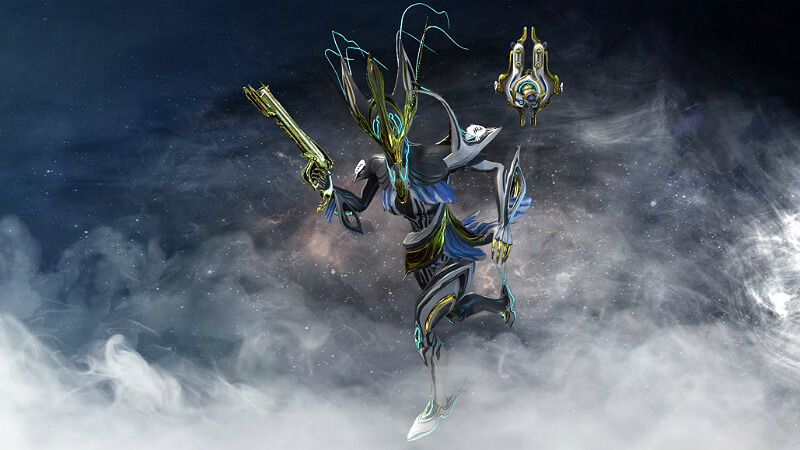 More often than not, the newly introduced ability augment mods have been rendered as mere utilities, if they are used at all. While I often disagree with this and find people underestimating their potential, I affirm some augments are more game-changing than others. There is even an augment that is so powerful, an entire build is based around that one augment. No, it’s not Irradiating Disarm. There is a disarm build, but it revolves around the Disarm alone, the augment is a mere addition. Without Resonance, the augment for Sonar, the efficiency of this build becomes a mere shadow of the complete version.

Overview: Potato Banshee. No Forma needed. Get Resonance. Get a lot of power duration and range, but don’t push it too much. You need to preserve your strength. Efficiency is good, but not an ultimate priority. If you don’t exactly know how to do this, read on, otherwise move on to the next heading. 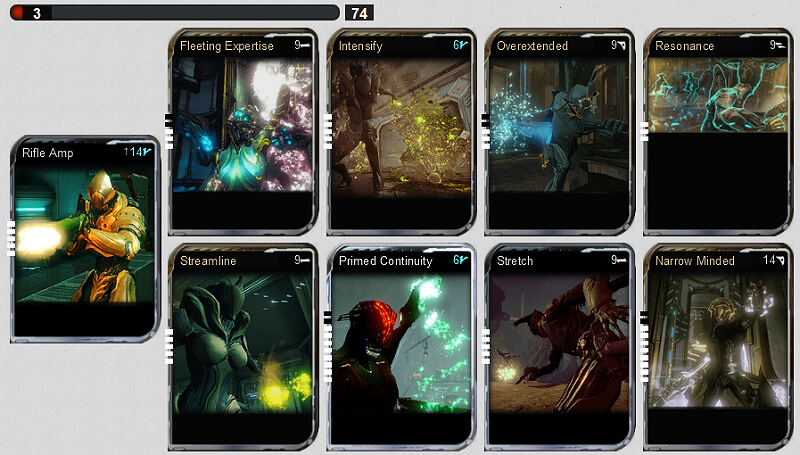 Aura – Any of matching polarity will do. But given it’s likely that you and your teammates will want to shoot the spots with rifles, Rifle Amp is my preferred choice.

Resonance – The centerpiece of our build, maxed.

Intensify – Not really for buff, rather to counter OE. If you ever get Primed Intensify (as of this update, there is no such thing), use it either for STR beyond base amount, or to push OE a bit higher.

Fleeting Expertise – This is where it gets interesting. You see, there are two problems about the FE’s slot. Firstly, it nerfes duration that we want. Secondly, it means you have no Vitality or Redirection or Vigor. Banshee is a caster frame, but if you want to support your team on high levels, you need to account for taking a few hits. Also, given how this build works, you don’t need max EFF, but still… So this is your choice. FE, or extra durability.

If you decide for FE, I personally only use maxed Streamline and Rank 4 for FE. It is below efficiency cap, but I don’t want to further nerf duration for just half of the rank benefit.

What Makes This Build Work? 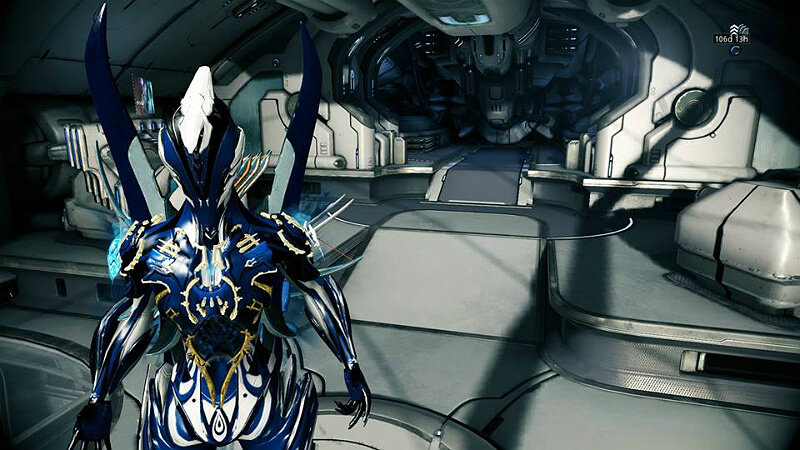 Resonance. The augment mod that triggers another Sonar pulse upon killing an enemy by weak spot damage. The Resonance pulse originates from the killed enemy and has the same range as your Sonar pulse with range mods included. This makes it spread on the entire map. The more enemies you meet, the more good it does to using your ability. It’s also the fact that if you max duration on Sonar unaugmented, it does you no good. Your teammates slaughter all the enemies in seconds because they can easily find them and employ massive damage. Your Sonar lasts 40 seconds, but often is gone in 5-10. You then end up recasting over and over.

Not with Resonance. With duration mods affecting it as well, the pulses not only keep spreading, but can even last beyond the original Sonar cast.

How To Use This Build? 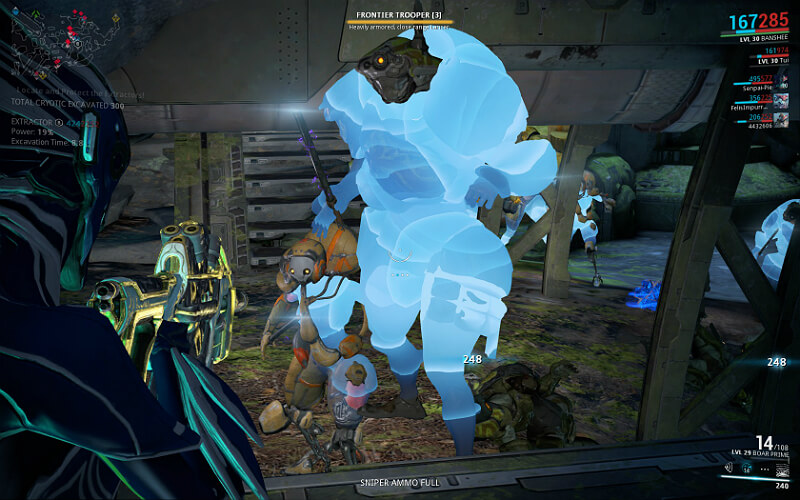 Tag along with your squad and cast Sonar. Then, watch the weakspots cover your enemies like rash because Resonance doesn’t override weak spots already in place, they just appear elsewhere on their bodies. If you want to participate in shooting, take a rather accurate weapon, forget about shotguns. I prefer Tiberon or Burston Prime. Honoring the namesake of this build, the sonic weakness shall spread like a plaque. It once occurred to me that an entire T3 Exterminate mission was complete with one cast of resonating Sonar.

Be mindful, however. Even if you decide to sacrifice power efficiency in favour of durability as mentioned before, Banshee is a caster frame, not meant for direct combat. You can use Silence as a panic button, but the high range decreases its potential in this matter. Sound Quake is not bad either, but with decreased efficiency (and even with maxed one), you rely on your teammates to finish off enemies that can likely chow you up after you run out of energy entirely. Sound Quake on 90% of power is quite weak on high levels. Stay close to your mates. They will be happy to pick you up in case a bullet slips through because of the massive damage you allow them to deal. 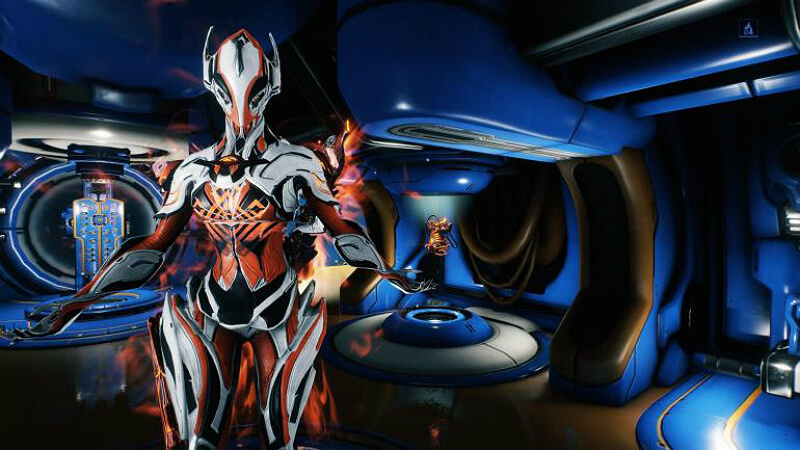 The Resonance augment has the rare trait of taking an ability and greatly amplifying its potential not by adding secondary effects, but by empowering what the ability already does and widening the set of situations where you can employ it. It is why I devised this build and why I felt it is useful to write this guide for you. Therefore I hope you learned something about Banshee and want to head to your Clan leader and slap him for not researching Banshee’s components yet. 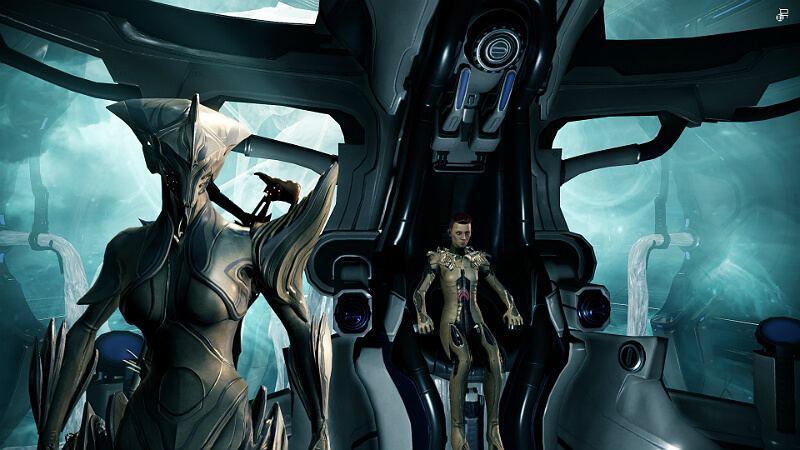 The basic build that I explained above is quite balanced duration/range wise, but has a certain disadvantage that can make you come out short in the end. The strength is somewhat below normal level, which makes your damage multiplier drop to 4.5x instead of ordinary 5x. While this serves you well on most missions, including T4 endless missions up to 40min/20waves, there are times you need more, like 60min+ survivals and The Law of Retribution raid.

What to do about it then?

Obvious solution is to replace one of your mods with a strength one, yes. But inevitably, you will then weaken your Warframe in another aspect of the ability. Thusfar, it’s a question of choosing the lesser evil. So let’s see why we need the individual aspects of the ability.

We need range so that when Resonance triggers, it has a better chance to illuminate additional incoming waves of enemies. This is especially useful in endless missions. With small range, you can still take a stand, but it shall be a near-sighted one. Relying on a short-range Sonar could have a Bombard surprise you from long range.

We need duration so that when Resonance triggers, it can last longer and possibly post-Sonar. Marks of new incoming enemies will last longer than the time they will take to reach your striking distance. This is most useful in objective, finite missions. If the duration is small, you will be able to see enemies farther away, but it might happen their marks will be gone before they get in range. Sonar is then only good as an awareness tool.

You need strength because… We already covered that, didn’t we?

Now to apply this! In case of the Raid and long defenses, it is better to sacrifice duration for strength’s sake. While this mission is finite, the spawns don’t act like it. You need to stay aware of the enemies that come to you and you need to kill them fast. You might need to recast often, but it’s a raid. Everyone must do their part more than usual. Get used to it and equip Transient Fortitude instead of FE. The lower efficiency doesn’t matter much either. I’d be surprised if you didn’t have Trinity on board. Rank as high as you can have it.

In case of long survivals and finite missions, sacrifice range. Do this by switching out Overextended for Blind Rage. Rank it to counter FE or higher. You might miss some targets in long range, but then again, with how long will the plague last, you might chain up into the long range anyway.

If you tend to camp Survivals rather than move around, go for duration nerf instead.