How I Solo Farm the Index: Credits for Days – Warframe 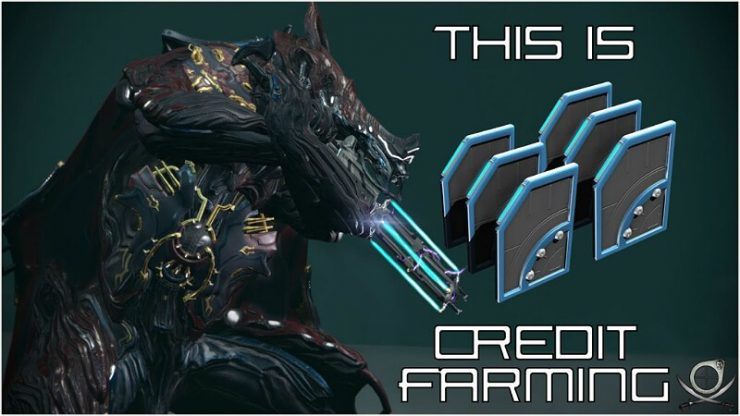 Hello! Welcome to my guide on my method to Solo-farm Index. Here I will discuss what the Index is and how to complete it as well as what the method I’ve been using for the time I got bored of doing relic runs. You can use this guide if you have the builds I will show, but keep in mind this is how I do SOLO runs. This guide isn’t intended for teamplay. (This is also my first guide so it’s not as great as the other ones.)

The Index is an arena type gamemode where you and up to three other Tenno players fight against a group of Corpus themed bots which is located on Neptune. Players must invest a specific amount of credits (depending on the level of risk) then compete in hopes to win back considerable profit after winning a match. 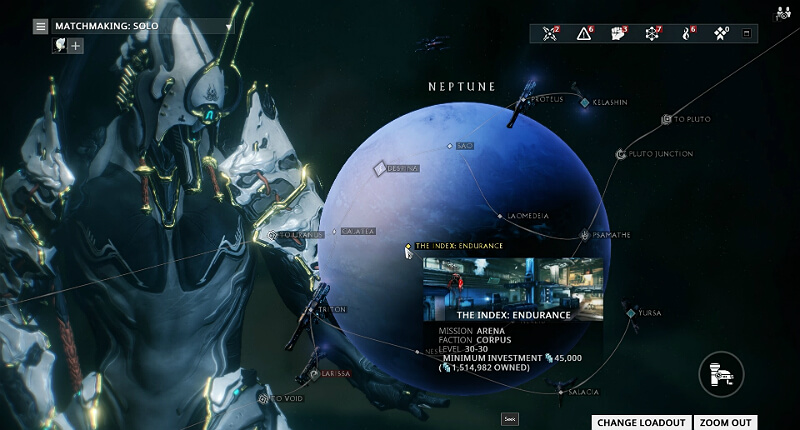 Before players start the mission, they are presented with a screen that will show three levels of risk to participate in: Low, Medium, and High.

In each level of risk, there are profit conditions players must follow in order to win profit back for winning. Players must reach the specified amount of points as well as winning the round (having more points than the Brokers) to get profit. Financial Stress is a debuff that will be explained in the next section of the guide.

Playing in the Index

Financial Stress, like previously mentioned is a debuff that’s obtained through carrying Index points. What it does is it reduces your HP and Shields pool depending on how many Index points you carry. 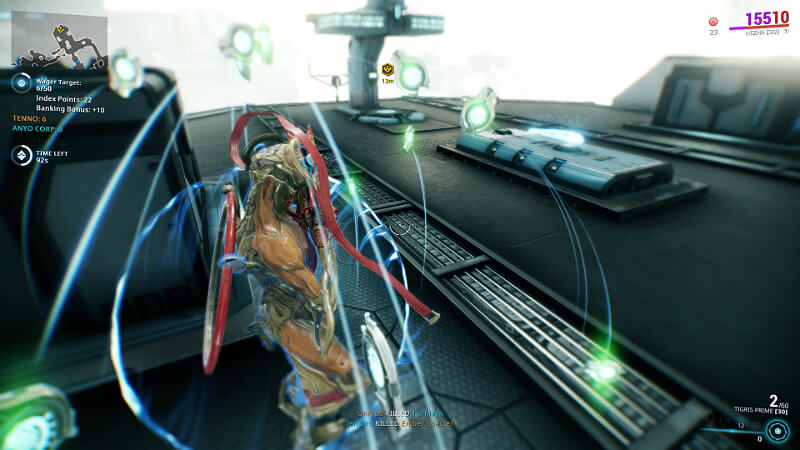 Notice how I’m carrying 22 Index Points, but my Health is 10.

The goal of the gamemode is to kill the enemy and grab the Index points they drop and turn them into their side of the field while preventing them from turning Index points into your side of the field. Once the conditions have been met (winning 25, 50, 100 points) you earn your profit. The Index is a gamemode about risk and reward. Carry more points and the rewards become higher, but getting yourself in more risk. How you choose to play the Index is personally up to you, but what matters is you meeting your profit conditions to win the profit you invested in for.

Here are a couple of things to take note: 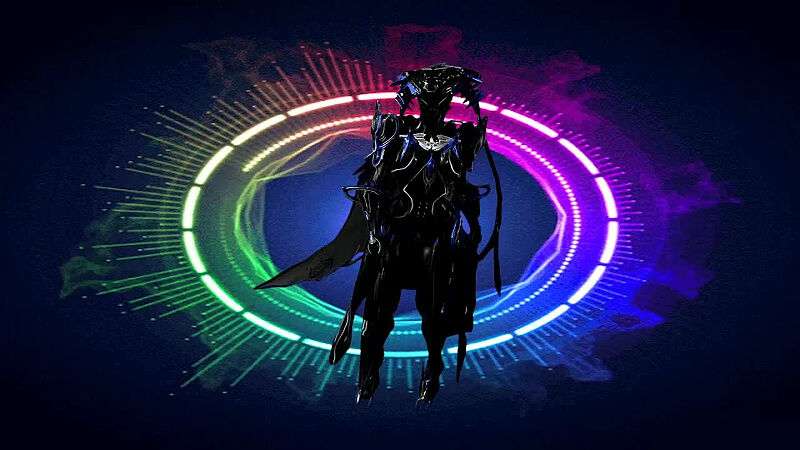 The enemies in the Index are absurd. From a Zanuka clone that can jump and shoot bullets in every direction to a Raptor clone and even an ice skating Corpus that can disrupt your abilities. The builds you would be using must be suited to take care of them with ease. Here are all of the enemies that you may encounter in your solo Index runs:

The enemies here can be potentially annoying especially with the fact they can endlessly scale as time progresses and points are scored, making them more harder to kill and thus making the game harder to win. If there is a group of enemies that are the most difficult to go against, it would have to be the Trading Group with Jad Teran being the nightmare for solo runs. Just stay away from Jad and you’ll be fine!

(An example of what you will be dealing with):

The builds I use to complete a solo run in the Medium Risk Index would be Ash Prime with Fatal Teleport and a Rhino with Efficiency. The weapon I ran with both Ash Prime and Rhino is the Tigris Prime modified for Viral and Radiation. The dagger I went with the Ash Prime build is the Karyst with Covert Lethality. (Note that these builds are just made for optimal runs. You can outbuild what I’ve shown here.)

Heck, you don’t even need Ash Prime to do all that fancy backstabbing. You can use the regular Ash if you don’t possess Ash Prime (since he’s vaulted), just build it like so: 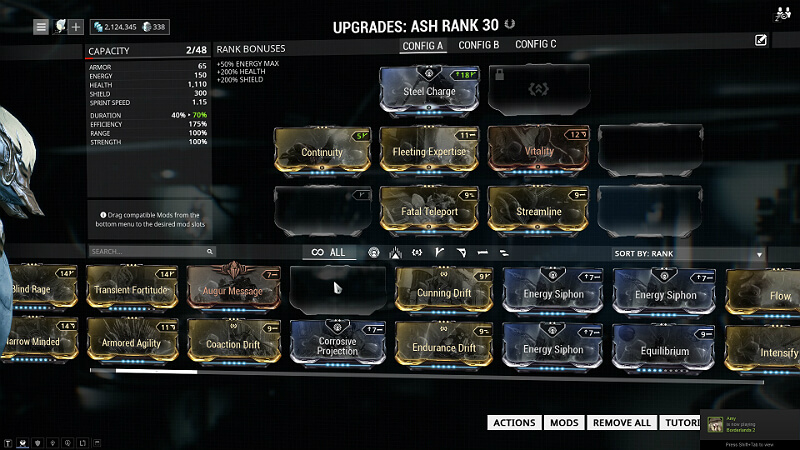 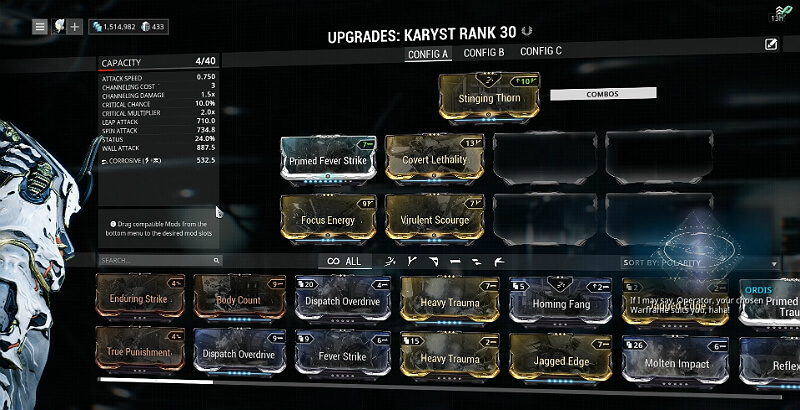 To explain the Ash Build: Fatal Teleport can be used on most enemies in the Index. With the augment mod, any dagger with Covert Lethality can one shot most enemies up until the round nearly ends. Fatal Teleport also has decent range and allows you to teleport to allies as well thanks to his rework. Ash’s Smoke Bomb (2) is also good with the combination of Fatal Teleport meaning easy finishers w/o any agro. Speaking of agro, Smoke Bomb is also really good for removing enemy agro off you when you need to escape with credits. The downsides though are that the finisher animation can sometimes bug and won’t go through, thus needing more casts on one enemy to finish. Your melee also must be a dagger with Covert Lethality which restricts your options a bit, but it’s for the good of Fatal Teleport. Pick any dagger and build Covert Lethality w/ Attack Speed (as attack speed increases finisher speed so your best bet would be Ceramic Dagger) and begin backstabbing people!

TL;DR – Just pick any dagger you possess with high attack speed and Covert Lethality, add more attack speed, and make sure to bring Fatal Teleport. Also vitality wouldn’t be so bad on Ash.

Tigris Prime (used on both Ash and Rhino) 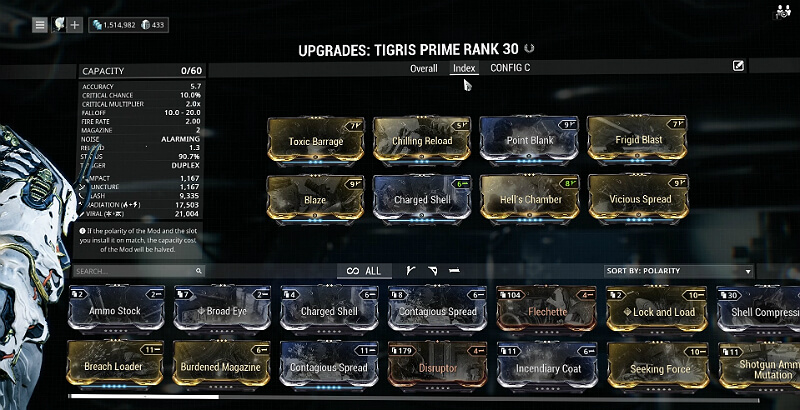 To explain the Tigris Build: Viral reduces HP by 50% which helps with the Slash procs as well as making them easier to kill. Radiation because it’s very good against robots and can confuse the enemy into attacking each other. (Like previously mentioned, these builds are optimal enough to pass for Solo-runs. You can go all out of your Tigris Prime or whatever you use if you wanted to.) 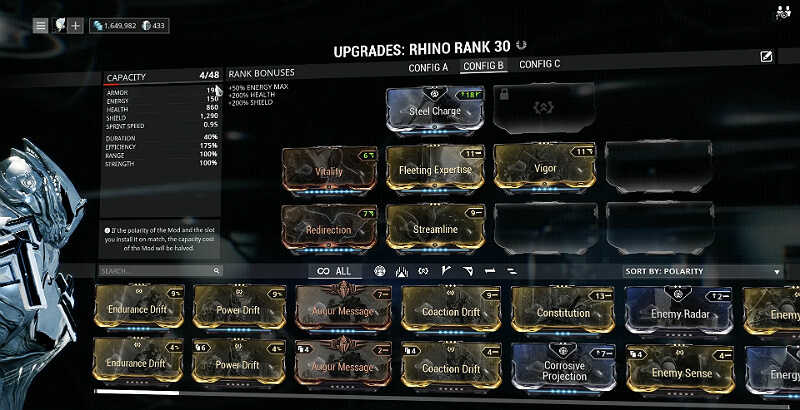 To explain the Rhino Build: Because of the low energy costs, Rhino’s Iron Skin (2) only costs 13 energy to cast with my build, making him nearly invulnerable most of the game. With a lot of shields and health, you will take a bit longer to die. When you carry a lot of credits, they would need to get through your iron skin before actually hurting you. This allows Rhino to carry a lot of Index Points, thus allowing for more bonus points and fewer trips to their point. The downsides with this is you’re relying purely on the Tigris Prime for your damage. Rhino’s Roar also only lasts 12 seconds with a 50% damage increase which I don’t personally use not to mention that the Iron Skin isn’t as strong compared to a forma’d + potatoed Rhino Prime that’s built to make Iron Skin stronger. (Note that the Rhino only has Steel Charge to boost mod capacity to fit 175% efficiency. No forma or potato here.)

If you do have a potato on Rhino and are looking for a more reliable build that mainly focuses on the durability of your Rhino Skin, build it like so:

Unlike Ash however, Rhino has a lot more backup weapons to choose from when it comes to the Index. One good example of this would be the Lesion w/ Condition Overload and 100% Status Chance. Pair it with the Tigris Prime (implying the status chance on Tigris Prime is 100%) and you can deal loads of damage with Lesion. Just keep note that it’s a backup weapon, so you will only rely on it when you either run out of ammo or are looking to finish off an enemy real quick. This is a build I found to be good on the Lesion: 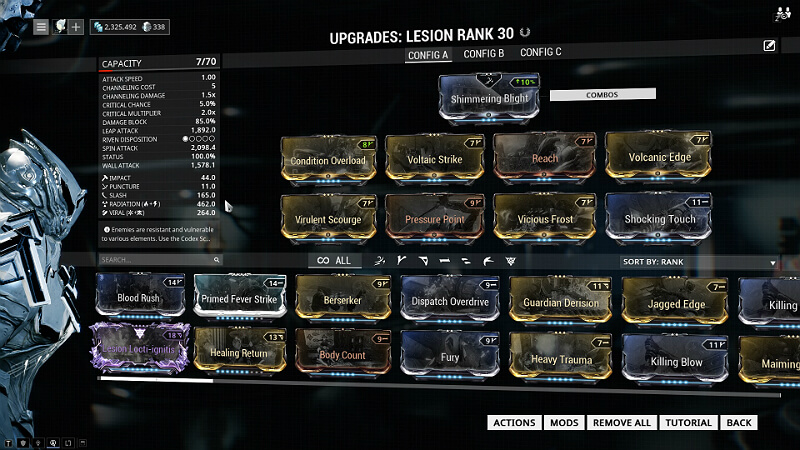 I am still testing what weapons work best with the Index although I believe that Lesion would be your best backup for Rhino.

Nezha (a.k.a. Trapframe) is also really good for the Index since his Warding Halo (3) can also act as Rhino’s Iron Skin with the addition of being able to slide around very quickly. He also has the mod augment that allows him to give Warding Halo to other allies with 50% effectiveness. However, his parts are only obtainable in clans who have the research done so he’s a bit harder to get than Rhino. 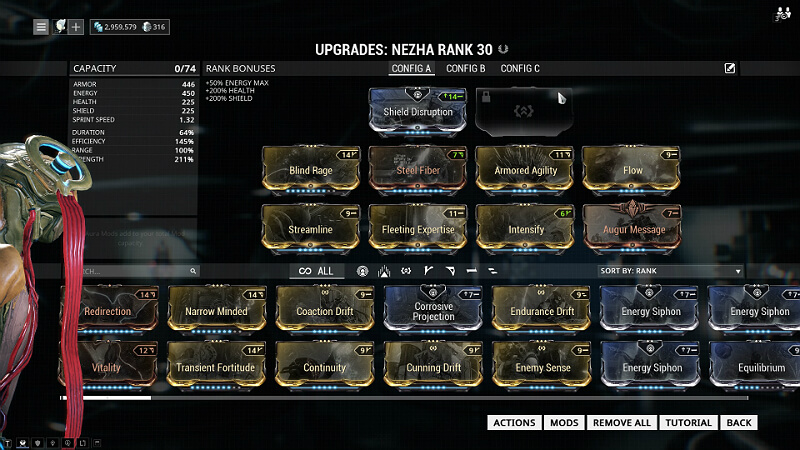 Be mindful of your shield health, match timer, as well as the amount of index points you’re carrying along with the bonus. Turning your head away from those for one second can come and bite you really bad.

TL;DR – Rhino’s Iron Skin and Nezha’s Warding Halo basically act the same way in terms of how they work except Nezha does damage and stuns enemies who get too close (which doesn’t seem to work in the Index from what I’ve seen.)

In the two videos below, I do one run with Ash Prime and another run with Rhino to compare: 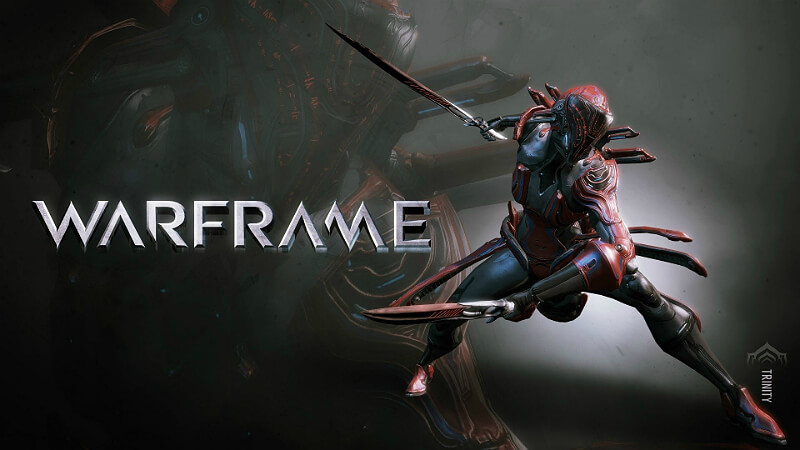 To wrap things up, these are my two ways to perform the Medium Index solo. It may be hard at first, but with some patience and practice, it will be easy to complete. The only thing you can’t really control is having to wait until the timer runs out to end. From that point you can just AFK until the match is over and let the enemies kill you again and bank points into your side to reduce the timer, thus ending the game more quickly.

The builds I’ve shown are 0 forma and most don’t even have potatoes installed in them, probably making this the most simple build I can show. You can potentially alter the builds on both the frames and weapons to make the runs even more faster and efficient compared to my builds.

TL;DR: The builds I’ve shown along with the video are just what you need to do the Medium Index Solo. You can make this more powerful than what I’m showing here.

Thanks for taking the time to look into my way to solo farm the Index. If you liked this guide and it helped you, don’t forget to rate it! If you have any questions at all, feel free to leave it in the comments below.

GTAmes
HOW TO: EMBER, THE ARSONIST – Warframe