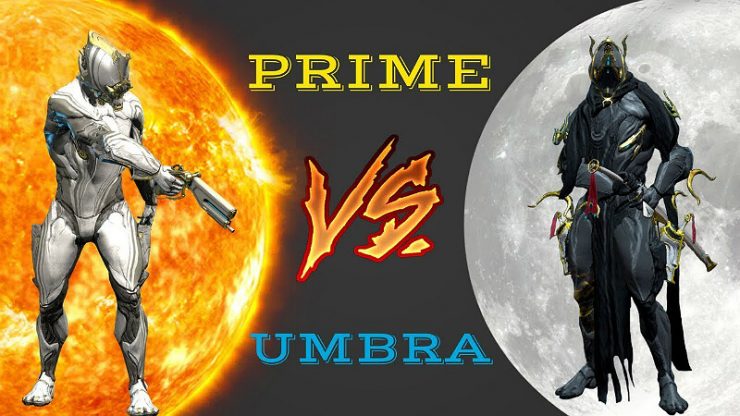 I am a little embittered. Only a little.

Yes, their stats are identical – but those polarities, and those mods… Umbra is a direct and massive upgrade from Prime.

Of course, he requires no small Endo investment, but with my current Excalibur setup (which I copied onto my Umbra) leads to this:

NOTE: Umbra Mods are still Rank 5, the base rank they come as – so not even upgraded yet.

Now, let’s Forma them both and upgrade Excalibur Umbra’s mods:

This is with the exact same mod setup – only Umbra mods instead of normal mods. It’s ridiculous. I know DE wanted to satisfy non-Founders, but leaving Prime in the dirt (despite buffing his armour) is kind of annoying. I usually delete obsolete frames, such as regular versions that I have Primed, because they’re using up space and I’ll never both using them (obviously).

I’m not going to delete Excalibur Prime, but he now serves no purpose at all. He’s better than normal Excalibur sure, but he’s completely obsolete in the face of Umbra (unless you run without Vitality or Steel Fiber, which I do not). Excalibur is one of the few frames I run with all 3 ‘main’ Warframe mods (Redirection, Vitality, Steel Fiber) because he still performs really well against 120 Corrupted Heavy Gunner’s with those equipped.

Umbra leaving Prime in the dust is not how the future Umbras should be approached.