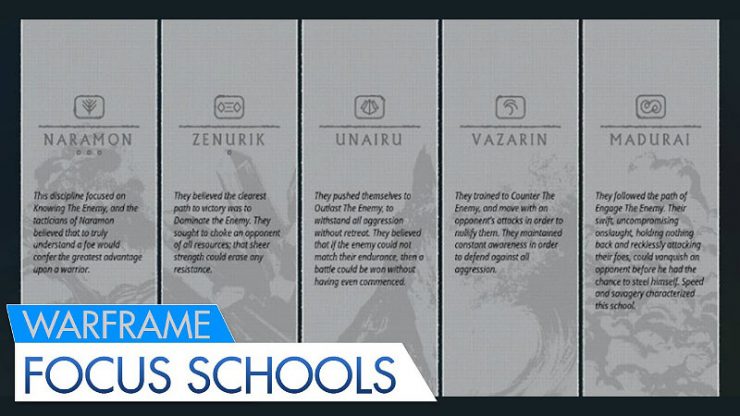 Hi guys, and I just wanted to bring up some ideas about focus schools. I was browsing around the different ones, and there are some really cool and powerful skills in some, like 25% physical damage on the Phoenix Talons, Madurai, and 25% elemental on Phoenix Spirit, or the 60 armor bonus on Stone Skin, Unairu, which isn’t a lot for tanky frames but is massive for lightweight frames (brings my ember prime from about 29% damage reduction to 38% damage reduction).

But then I go and look at Zenurik. 5 energy per second, with no cooldown, and no cost. That’s about the only good non-waybound thing in Zenurik, but that is massive, especially for players on a budget regarding energy restores.

While energy restores can be effective (200 energy in 15s compared to 150 in 30s with zenurik), they have several limitations.

So I have 2 suggestions, either one would be nice:

1. Buff energy restores so they are viable outside of game modes/tilesets/warframes that just involve standing in a small spot. This would reduce the superiority of zenurik for many players, making zenurik an economy focus tree. I would suggest, if this path is taken, to add other additions to zenurik so it is no longer a 1 skill wonder. Things like efficiency, duration for the warframe and operator, and (in addition to the operator) max energy to the warframe.

For example, why use zenurik when I have energy restores that are effective, when I could buff my melee affinity, or buff my damages? I could make mobile/squishy frames that much less squishier with even 60 more armor, or allow myself to turn into a frost jr. with void aegis.

At the very least, I would like to see statistics on how many people who use each focus school, as it could be my dream that Zenurik is the overwhelmingly most used school for one skill alone.