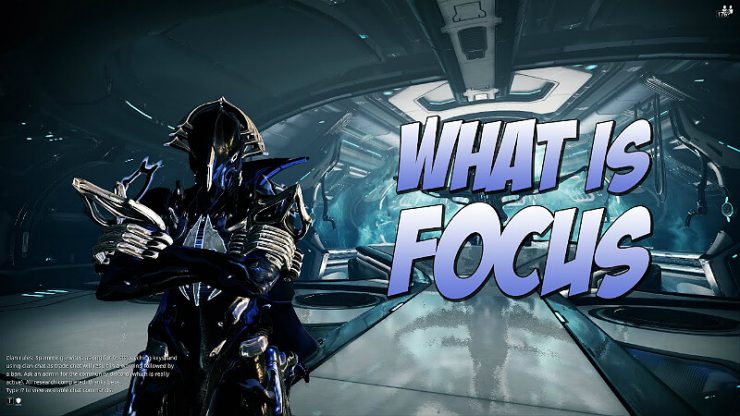 So I’ve started getting back into WF, and overall I’m wondering what the deal is with it.

Example what’s the difference between Primary and Secondary Schools. What’s the deal with Waybound skills and the like.

I will try my best to explain it all. If you have any questions then feel free to ask and I will try to clear it up.

The Focus system was added with the Second Dream quest and expanded in the War Within and Plains of Eidolon content. The five schools all relate to the D&D class system. With:

Primary School is the school you have equipped. Secondary Schools are the other options you have. Unlocking each school also unlock their character stance.

Each School has a skill tree which has nodes you can unlock and level. Nodes with passive effects are always on while other will only work when doing a certain action. Waybound passives are passive effects that can be unlocked and shared between schools by maxing them out (The final level will require 1,000,000 Focus and a Brilliant Shard, which is gained by capturing an Eidolon)

Each Node also has a cost which is taken from the Pool. The Pool can be increased by spending focus which will increase the Pool for all Focus Schools and can use focus from any one School to increase it by one point.

Focus is gained by equipping Lenses. There are Lenses for each school and three different Level of Lens. The lowest tier of Lens is gained by doing Bounties on the Plains of Eidolon (Cetus, Earth) and are a common reward (and can be traded). Greater Lenses are gained by purchasing their blueprint from the market (200,000 credits for each greater lens each time) and then crafting them (note it takes four normal lenses to craft a greater lens) (Which can not be traded but bought with Plat). The final Tier is the Eidolon Lens which is much harder to get (but also can be traded for). The blueprint is a rare reward from the highest Tier of Bounty on Cetus (Can only be awarded by completing stage 4-5 of the bounty) and to craft it you will need a single Greater lens (And some other stuff but they are fairly common)

Lenses are equipped to max rank Warframes and/or Weapons. Depending on where the lens is equipped determines what share of the affinity points (EXP) is converted into Focus Points. But by equipping a lens into both you will generally get 100% conversion ratio (Note I said Ratio and not rate as different tier of lenses have different rates of conversion.)

Normal lenses only convert at a rate of 1.25% of gained affinity into Focus. Greater Lenses convert 1.75% and Eidolon lenses convert 2.25%. Before this is done the Ratio is taken into account between the weapon lens or the Warframe lens based on how the kill was made. If you kill someone with an Warframe ability the Warframe lens will gain the full amount of affinity to convert into Focus. If you make a kill with an weapon then half will go to both. And if an ally make the kill the affinity will go to the weapon’s lens instead. Which is why I said to equip a lens to both the Warframe and the Weapon. So that there is no loss of Affinity due to Ratio.

The daily cap for Focus is based on your Mastery Rank. The base is 250,000 + 5,000 for each Mastery Rank. If you find yourself having a hard time reaching this cap then I would suggest trying the Sanctuary Onslaught with gear with Lenses on it. Affinity Boosters also affect this.

Focus Orbs/Convergence orbs will also spawn randomly during missions while you have a functioning lens (Lenses only function while the Weapon/Warframe is maxed rank.) These are Yellow orbs which will pop up even on the map which will provide a bonus to focus gain when touched. When touched they will provide a x8 bonus for 45 seconds and can spawn multiple times in a mission (With a set time between spawns) but only last a short time if not picked up.

During Sanctuary Onslaught Orbs will not spawn but their effects will take place at the beginning of each new round (starting after the second) and the bonus multiplier will increase which each new round as well. Which makes it the ideal farming spot for Focus Points.

Warning Any and all equipped Lenses can never be removed from a Warframe/Weapon. Any attempt to equip another lens on to the same Weapon/Warframe will just destroy the original Lens.

WARNING This is information the game will not tell you WARNING

Once you have completed both the Second Dream and the War Within there is a special weapon you can acquire from Cetus. It is highly suggested you do this. To get this weapon you must complete Saya’s Vigil by running a bounty on Cetus and asking Konzu for “A personal Favour” he will then run you through a tutorial mission which will give you the Gara Blueprint. Once this is done you must find a locked door which is only opened by walking around in Spoiler mode. Once inside you will meet with the Quills which will provide the weapon and unlock the nodes in your skill tree. As well as provide parts to craft similar weapons for Rep.

GTAmes
Does anybody still plays as Excalibur? Warframe