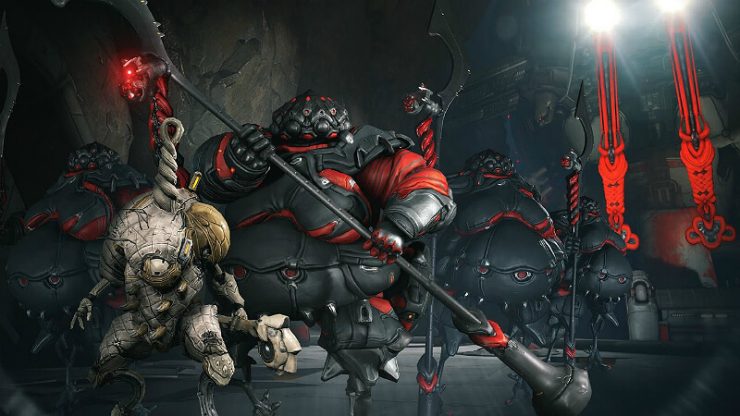 , You’ve decided to click on this guide to figure out how Kuva Siphon missions work and I thank you for that. Since this is Decent guide, it won’t cover everything but it will cover the required actions you will need to do and how to do them effectively. Let’s get into it, shall we?

What is a Kuva Siphon Mission? 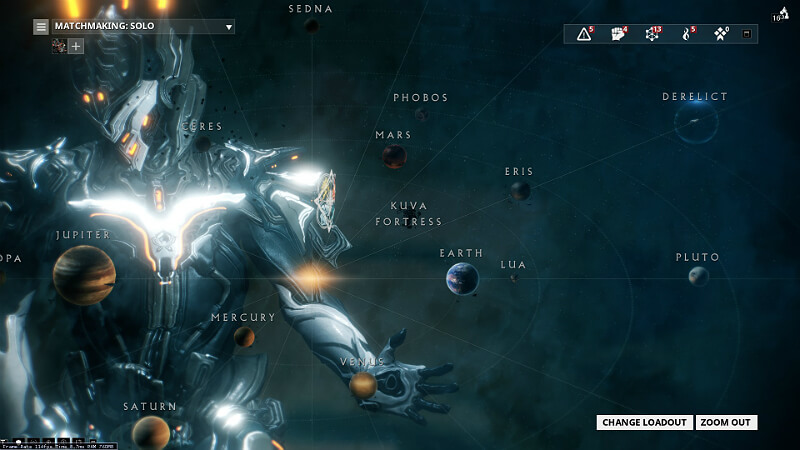 A Kuva Siphon mission is a sub-game mode that is added to regular missions in warframe which allows you to challenge the younger Grineer Queen, Worm, and her little rumple-dimples (Grineer soldiers). The way these Kuva events are created is determined on where the Kuva Fortress currently is on the star-chat map. Whichever 2 planets it is closest to will hold these events, however they are limited to a certain amount per planet rotation. The screenshot below shows the Kuva Fortress hovering near Mars and Earth, thus causing Mars and Earth to contain these events.

What is the difference between a Kuva Siphon and a Kuva Flood?

The screenshots below will show the difference between a Kuva Siphon and a Kuva Flood. 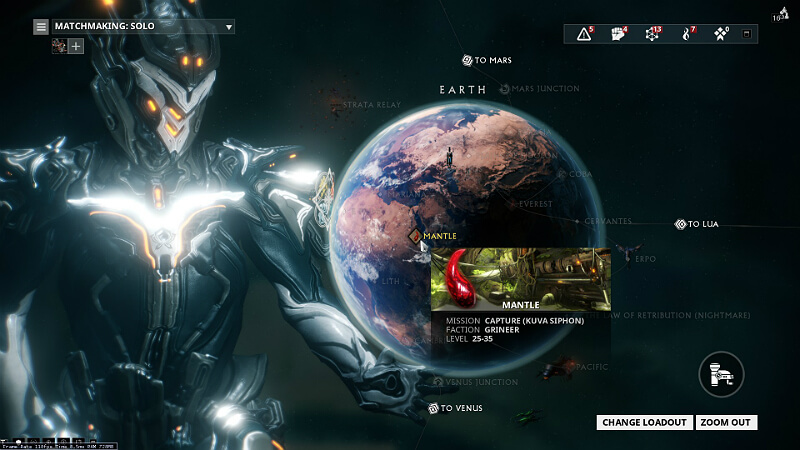 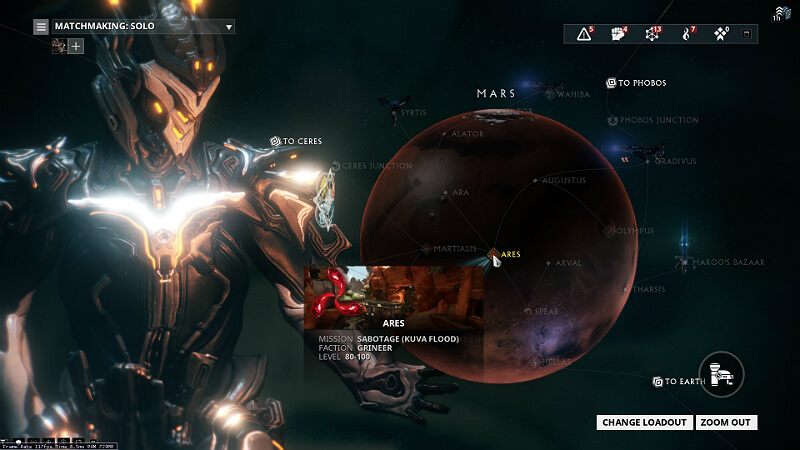 How do I deal with the enemies in Kuva missions?!

In Kuva missions, the Kuva Siphon will spawn enemies that belong to the Kuva Fortress tile set and 2 unique enemies. 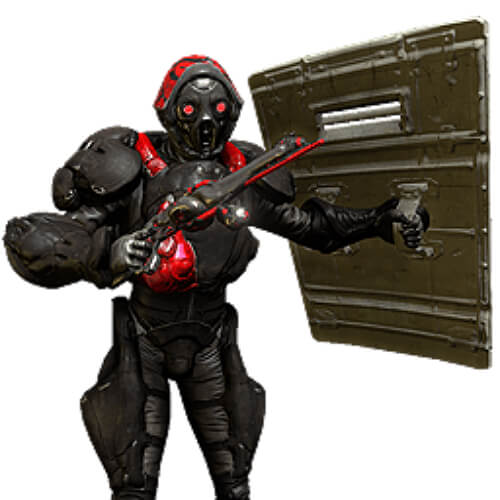 Kuva Grineer Soldiers are a new set of the Grineer army that occupy the Kuva Fortress that are still as ugly as the rest. These enemies are basically clones of normal grineer enemies that you find on earth and such, there’s not much to say about them besides just deal with them the same as you would deal with every other grineer enemy. 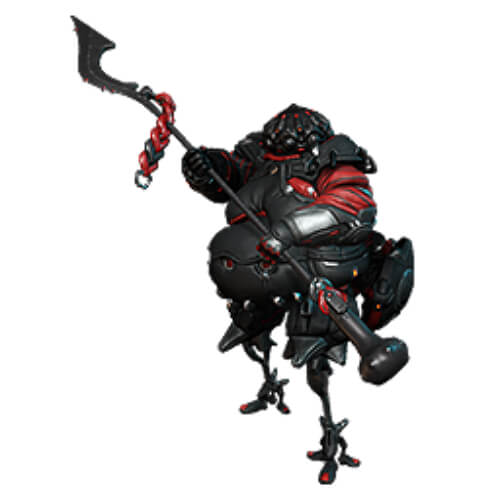 This is 1 of the 2 enemies that are unique to Kuva missions. Kuva Guardians are these hulking grineer warriors that wield a giant war-glaive called Kesheg when armed and dual pistols called Twin Rogga when disarmed. Kuva Guardians cannot be crowd controlled in anyway, including Limbo’s “Stasis” ability, KEEP THIS IN MIND! If you just recently finished the quest “The War Within”, you deal with these enemies the same way you did during that quest as you do in Kuva missions. If you forgot don’t worry, I’ll tell you how to fight them.

These enemies will do tons of damage and cannot be hurt until you knock the Kesheg out of their hands, to do this you much use your operator by pressing 5 and using your Void Blast by pressing E once you get close to them, after you’ve done that they will fall to the ground and rest on their Kesheg. While they are resting on their Kesheg Void Dash directly into them by pressing CTRL+Space. The Kuva Guardians will now be disarmed and open to taking damage. Kuva Guardians have a chance of dropping the Orvius Blade which can be used to build the Orvius, a throwable weapon that will suspend an enemy in the air when you throw it at them while channeling and dual wielding it. 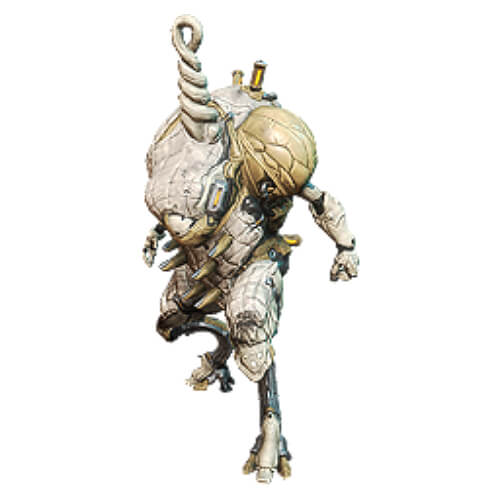 Jesters are these little creatures that rest on the shoulder of Kuva Guardians. These enemies do practically nothing besides run around and climb on you and can be killed simply by shooting them. You can easily get Jesters off of you by rolling or bullet jumping, their damage is minuscule so you probably won’t notice that they are even damaging you unless you are in operator mode, in which case they can do quite a bit of damage to you fairly quick. Jesters will drop the Orvius Disc which is required to build the Orvius.

How do I defeat the Kuva Siphon?

Besides what the Lotus deceivingly tells you and the health bar on the Siphon shows, you cannot destroy or damage the Kuva Siphon with weapons. In order to destroy it you must collect floating clouds of red and black particles called Kuva. During the mission the hoses on the Kuva Siphon will rise, seemingly suck up the air and “scream”. You can tell where the Kuva cloud is coming from by paying attention to where the hose is pointing.

The screenshot below shows an active Kuva Siphon hose. 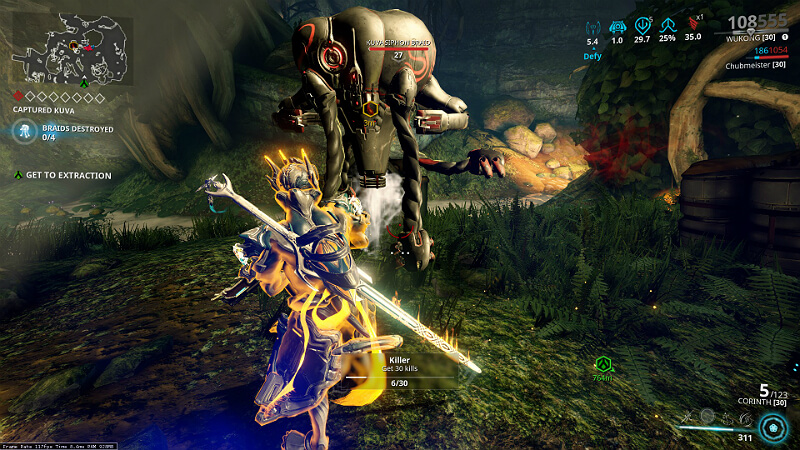 To harvest these Kuva clouds you must go into operator mode and Void dash (CTRL+Space) into the cloud or Void Pulse (Left Mouse Button) to shoot the cloud. 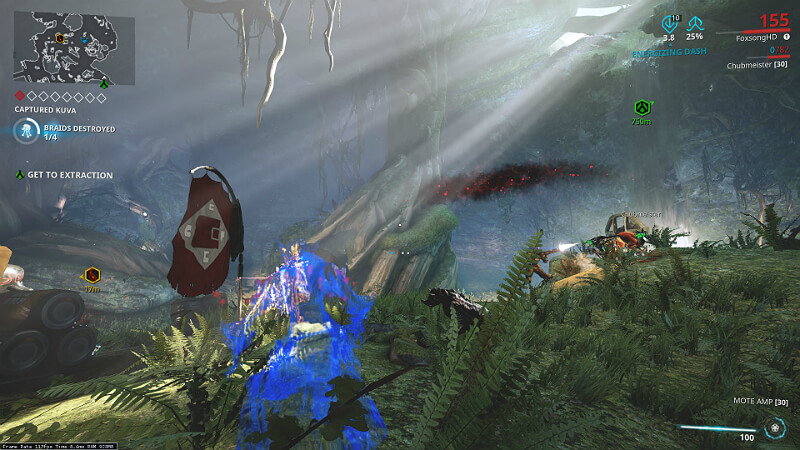 I personally prefer to shoot the cloud but both are equally effective. Collecting a Kuva Cloud will destroy the corresponding hose that rose up to suck it up, however, you must make sure that the Kuva Siphon does not suck up 8 Kuva clouds, if you do you will lose the event and you will get no Kuva. After you’ve collected 4 Kuva clouds all the hoses will be destroyed along with the Kuva Siphon itself and you will be rewarded with a material called Kuva.

Kuva missions are named after the whole point of their existence, the material called Kuva. Kuva is used for crafting weapons belonging to the Kuva Fortress Grineer Army and for Riven Mods. Riven Mods are mods that are obtained by completing all 3 daily Sortie missions. There is a 25.9% chance that you will be rewarded with a Riven Mod.

The image below shows you what the material looks like. 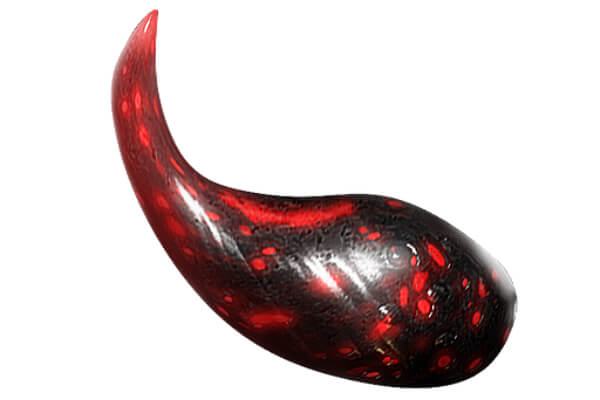 Riven Mods need to be “Unveiled” by completing the challenge that is proposed to you on the mod itself. There are 3 types of Riven Mods, those being Rifle, Shotgun and Melee, each title belonging to the weapon type its named after.

After it is Unveiled you will be given a mod with a random weapon in its name, Riven Mods can only be used on the weapon and its variants such as prime, wraith, dex, and vandals. Mutalist does not count as a weapon variant for Riven Mods. Riven Mods will have 2-3 stats on it ranging from Damage to Zoom Percentage, this can either be Negative or Positive, Negative obviously taking away the certain stat and Positive adding to it.

The screenshot below shows an example of a riven mod, the riven mod below can only be used with a weapon called Corinth. 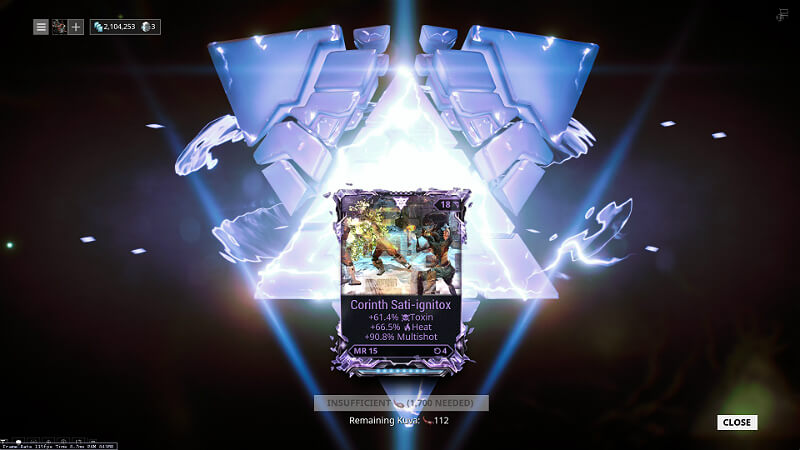 You can use Kuva to reroll the stats on the Riven Mods, however this is random and will get more and more expensive until it reaches a certain price limit (3,500 kuva is the current price cap for rerolling). You can reroll a riven by clicking on it in the Mods menu and pressing “Cycle”.

The screenshot below shows the riven menu in your Mods. 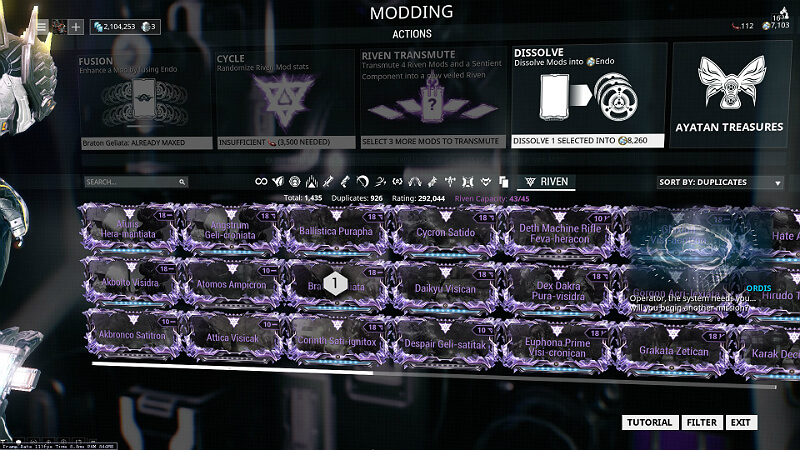 The screenshot below shows the Corinth’s Riven Disposition. 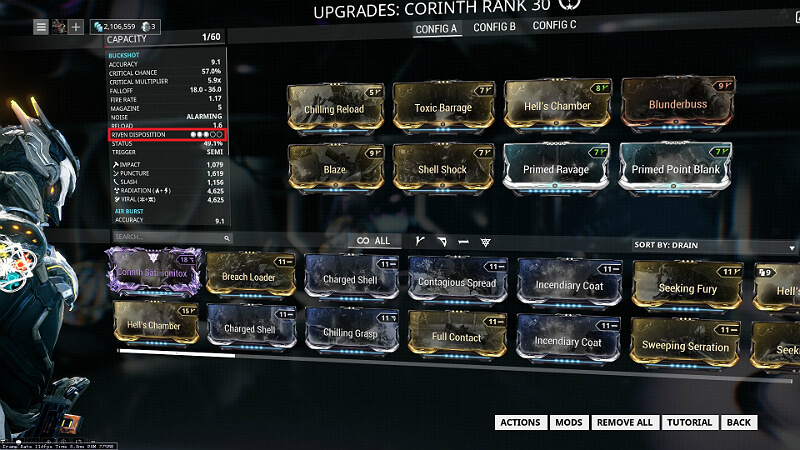 Riven Mods will have a Mastery Rank lock on them, if you are lower than the proposed rank you will not be able to use the mod but you can hold on to it. This Mastery Rank lock is completely arbitrary, it has no effect on what stats or the amount of stats for the Riven Mod! 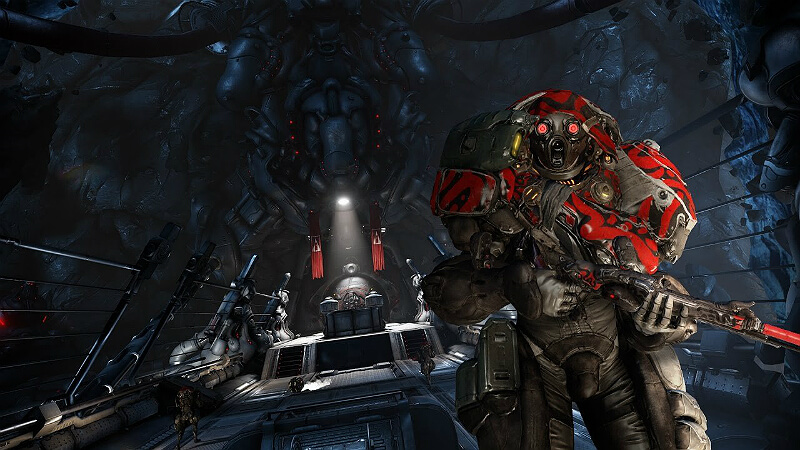 Kuva missions are made infinitely easier if you use a warframe with some sort of invulnerability such and Rhino’s Iron Skin or by using defensive abilities such as Frost’s Snowglobe. Do not forget that Kuva Guardians can not be crowd controlled at all with things such as Nyx’s Chaos or with certain elemental damage debuffs, however Kuva Guardians can have Radiation applied to them which will have enemies attack the Kuva Guardian which will draw some fire off of you but it is still better to just kill Kuva Guardians instead of keeping them alive as a decoy.

Smeeta Kavat’s have a kavat skill called “Charm”. Charm lets the kavat have a 28% chance to give the owner a buff every 27 seconds, one of the buffs it can give gives the user Doubled Pickups and Affinity! Any pickups collected or affinity earned are doubled for 120 seconds! This buff is absolutely amazing, HOWEVER, it is a random chance to get it. It’s hard to keep track of what kavat buff you get when charm procs, but, this certain buff is the only one that lasts 120 seconds so whenever you see a count down for 120 seconds, you’ll be granted double affinity and double pick ups. “But Praise…” I hear you cry “… It say’s “pickups”, kuva siphons don’t drop an item and it just grants it to you.” You are indeed correct in saying this BUT, you will still get double the kuva when the buff is active! I would advise you either wait to start a siphon until you get the buff since letting the siphon gather Kuva clouds can be pretty dangerous. 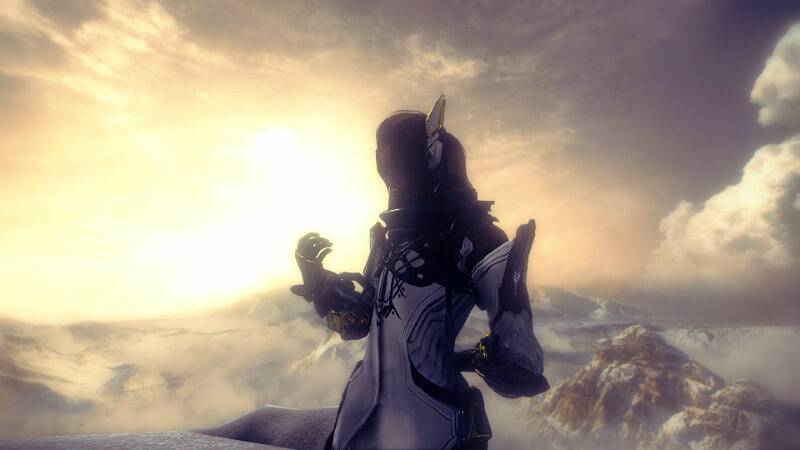 I thank all of you that have fully read through this guide and I hope that it has helped you get through Kuva missions easier. If you have any questions, please leave them here and I will answer them as best and as fast as I can.