Revenant Is Worth It – Warframe 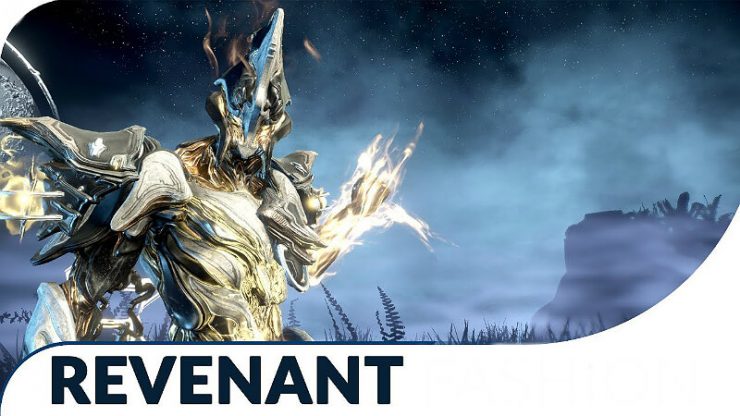 A breakdown of Revenant, his build, and some notes regarding Danse Macabre interactions. 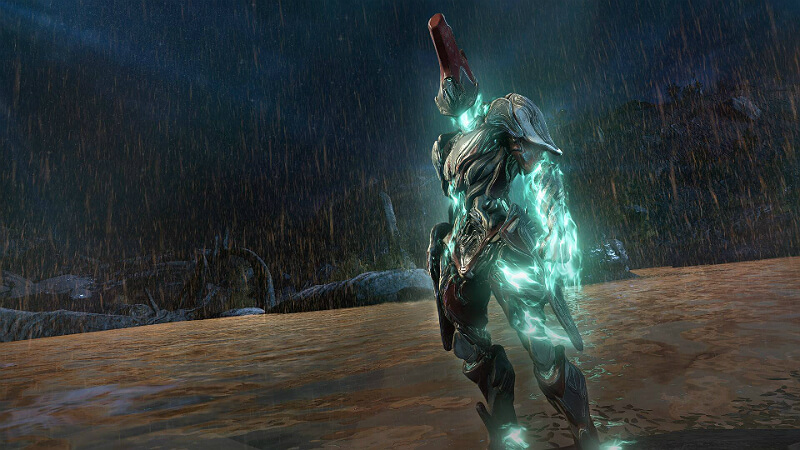 Hello Tenno! I’m Zyneris and I’m here today to talk about Revenant. I can’t say I’m an expert at him just yet, but I’ve been putting a lot of time in to him that I haven’t even spent on my ‘main’. I’ve done various testing with him and have discovered quite a few things as well as understanding more and more how his kit functions and scales.

I really hope this guide will help you all better understand him and maybe even give you more of a willingness to try him.

Now let’s talk about his abilities! 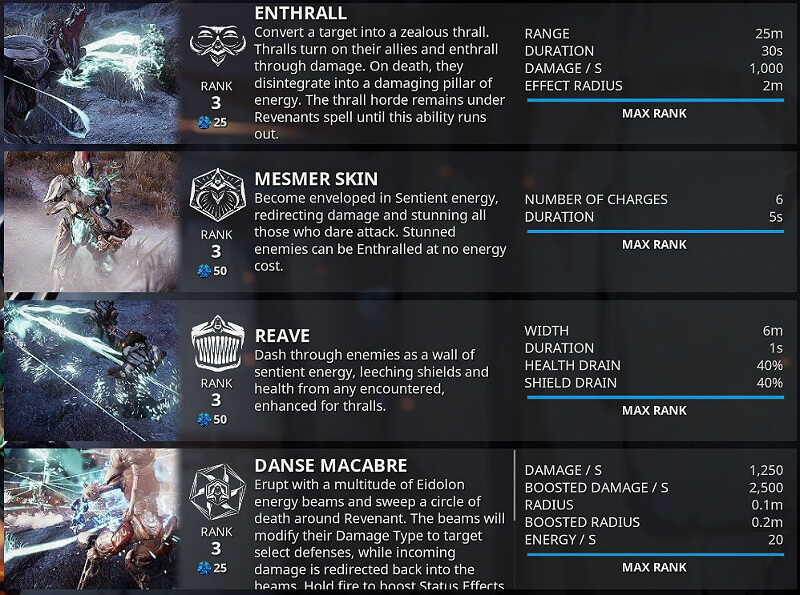 The ability also has adaptive status and will change based on the enemy type you’re hitting (Magnetic for Corpus, Corrosive for Grineer, and Gas for Infested). The ability has a base 20% and is increased to 40% while you’re empowered.

Revenant is also immune to knockdowns during this.


* Drain is affected by Duration mods
* Damage is affected by Strength mods
* Beam Radius (thickness of beams) is affected by Range mods
* During Danse Macabre only Reave is castable, costing half
* During Danse Macabre Revenant is only able to move but all other functions are disabled
(ie: jump, Operator, energy recovery)
*Energy recovery is only available from the following methods: energy orbs,
energize, orokin void death orbs, Rage/HA, syndicate weapons, some syndicate augments
* Thralls killed by this drop Overshields 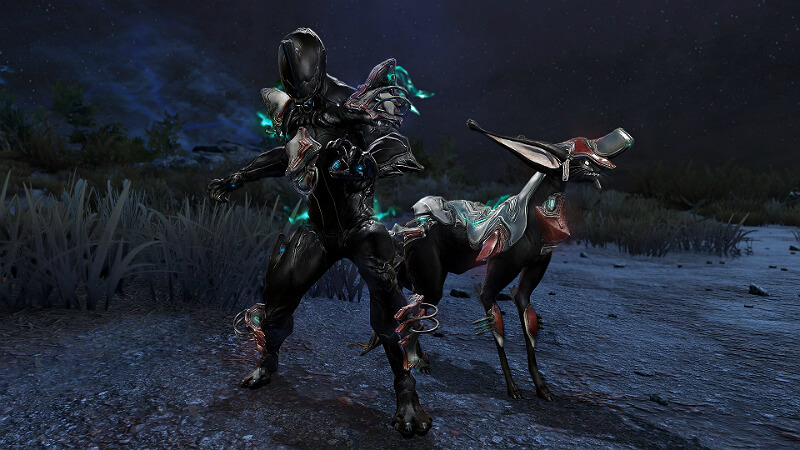 Expanding upon his 4th ability for just a moment here are some important notes for when you’re using Revenant.

Currently my favorite and most effective build is seen below.

The build I’m using is a max efficiency build with over 200% strength. This build is centered around using his 4 and keeping Mesmer Skin up for as long as possible.

Open Slot!: Before I explain each mod, I want to explain that this build does leave the possibility for 1 mod of your choosing. Currently displayed shows I’m using Augur Message as I’m testing this build for some solo content. You can put whatever you want in that slot, I recommend using a health mod to help keep him alive. If I formad more I could add Umbral Vitality to increase both Umbral mods.

It’s ultimately your choice on what mod you want there.

To start off I’m using Corrosive Projection in my aura slot. Being that Energy Siphon does not work on his 4, this is the best option. No one likes armor!

Next is Power Drift, I take this mainly for the strength increase, but the knockdown resistance is also good for when I’m trying to recover my energy and not in Danse Macabre.

Primed Continuity is here just to keep the duration at a decent level. With my efficiency being what it is, I don’t really need duration, but I don’t want it completely gone either for Thralls or stun from Mesmer Skin.

Transient Fortitude R8 is here for the added strength with a cut to duration. Why R8? Because I don’t have an additional TF for R10.

Umbral Intensify/Augur Secrets: Strength. Note that the bonus for Secrets DOES NOT work on his 4.

Flow because his base energy level is awful. You can use Primed Flow for an extra forma if you choose to, but as this time mine is not maxed out so I’m not using it.

Streamline/Fleeting Expertise to max my efficiency. With this I’m able to escape having to add more duration to my build and use that open space for other mods (ie Strength/Defense). I also only have a maxed FE, so my build is catered to that.

My arcanes are Guardian for obvious reasons. If you’re not familiar with Guardian it’s an arcane that provides chance upon damage taken for your warframe to gain armor for a short time. Since Revenant can increase his 4’s damage via damage from enemies, this is very helpful in keeping him alive. At max rank it’s a 20% chance for 600 armor to happen for 20sec.

And Grace for the chance to regen health over time.

I would highly recommend Energize on your second slot if you have it/can afford it as this is the best arcane for energy hungry frames.

Note regarding FE and TF: You can take a max rank TF with a rank 3 or 4 FE and be perfectly fine with your duration/efficiency/str. Doing this will actually allow you to remove Augur Secrets entirely if you wish to slot something more defensive. Currently I do not have the mods to fully test this, but when I do I will add in that build. -Thanks to all the players who have commented on this!

Below are the stats on his abilities with my build: 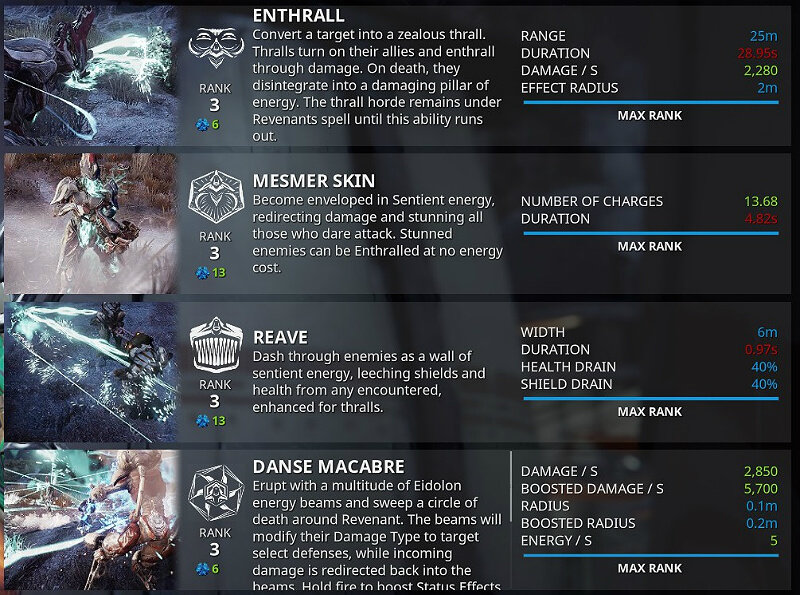 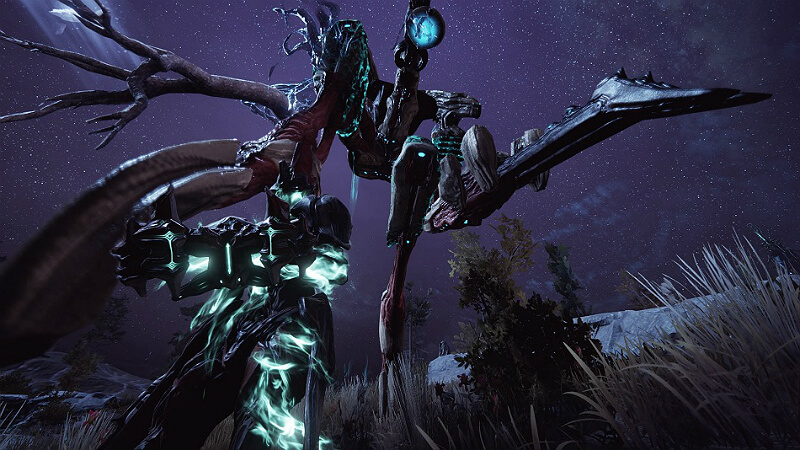 Using the above setup has netted me some great experience with Revenant without feeling restricted by his kit. I’m able to take him in to various missions at various levels and feel great. That being said, I want to do a quite rundown of my take aways from his kit.

Overall the ability just isn’t what it could be. I like the on death effect, but something prior to that to make this ability better.

My thoughts haven’t changed from the above. The homing portion doesn’t seem that noticeable. I wish they would rework this ability to something more unique, useful, and eidolon like.

Management is required to ensure that you’re always refreshing (this ability is recatsable while active), though I’m not a fan of the fact that he is vulnerable during the refresh animation.

Overall Mesmer Skin has changed my mind about it. I do think it could use a charge increase, maybe 2 charges per % of ability strength rather than 1, but overall it’s not bad.

In theory, using this while in Danse sounds like it would work out great, BUT in the times when you would need it – like versus level 100+ HGs and Bombards – by the time you get within range of them you’re dead. Just not that great in practice.

What could make this better? I truly don’t know. Something to make it more useful in the times when you will need it, which won’t be until your Mesmer Skin runs out and at that point you need the time to stay alive long enough to reach the enemy and drain enough to get out of Danse and turn Mesmer back on. See the issue?

In addition to what I originally said, sure they added the invulnerability part, but ultimately it doesn’t do justice. The ability isn’t strong enough when you need it. This is coming from testing this against sortie level Grineer units, attempting to use Reave to be invulnerable to drain from them while in Danse just doesn’t do really much of anything. It can’t keep up with the damage they are sending out plus it’s cost on top of Danse’s cost.

I think Reave should either be free during Danse or refresh Mesmer Skin to make it worthwhile. 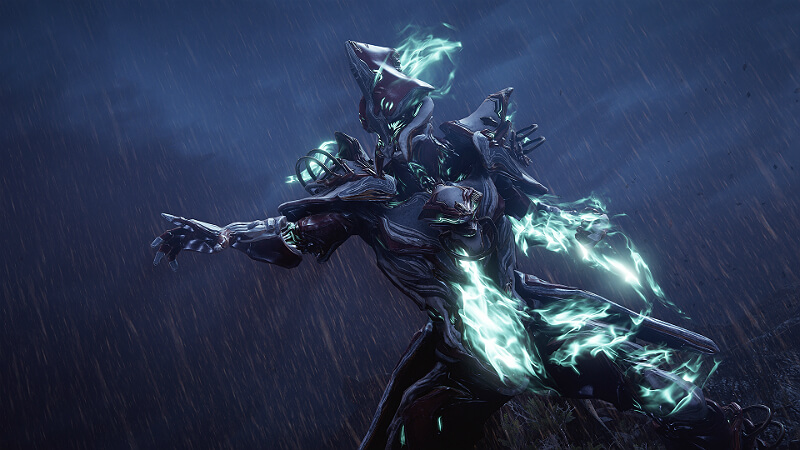 I suppose if I had to complain, maybe make Mesmer Skin recastable while in it? Does that make it too op? I mean you’ll still have to exit to get energy at some point or if you’re moving and need to jump. But that’s about it.

Time to talk about the drain changes! So, Danse was increased from a base drain of 12.5 to 20/s. That’s base! Now, after running some missions with my current build, it takes my drain to 5/s – this is the lowest you can make it since abilities cannot cost less than 25% of their base.

Now these changes absolutely are unwarranted and by far extreme, BUT he’s not dead by any means. These changes simply make energy management beyond your focus if you’re going for a reliable 4 build. You -can- spam 4, but you need to make sure that if enemy numbers are low you’re taking that time to recover energy.

In addition to the added drain, I also feel like this makes using Reave even more nonexistant. It almost feels like using Reave is pointless with the drain on your Danse. Even with my build, attempting to stay alive with Reave while in Danse doesn’t do much. Sure you can afford to cast it, but overall it’s not helpful in the times when you would need it. Plus if you start spamming it for the invuln, you start running out of energy fairly quickly. They can be used together, but again, this requires very careful energy management to ensure you don’t drain dry.

Overall I feel the changes to his 4 were and are unwelcomed and unwarranted. His 1 needs reworked, his 2 needs buffed, and his 3 needs to be free during his 4 or allow it to refresh his Mesmer Skin. The changes to his 4 will hinder him somewhat, but if you can micromanage your energy consumption and are very mindful of energy draining enemies, you can still use him to the best of his capability.

Should I Play Revenant? 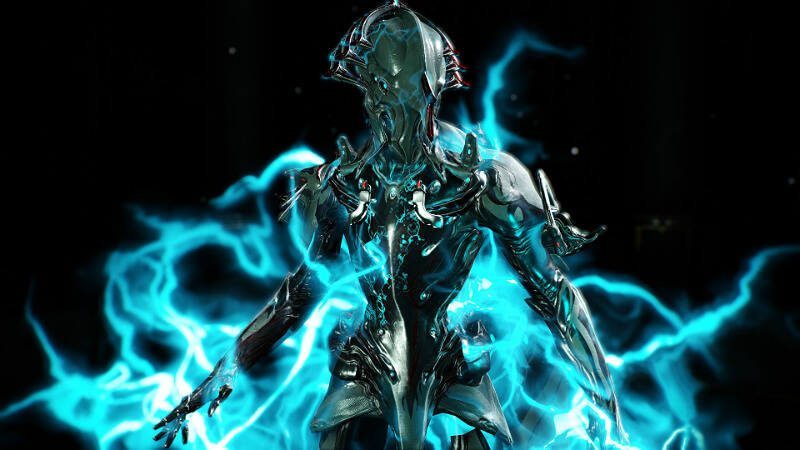 With the changes to Revenants kit he requires energy management. If you comfortable in that kind of playstyle, then I’d say go all out and still pick him up. I personally don’t think the changes killed, but they have hindered his power quite a bit, especially when you’re in high-end missions.

That being said his 1 still needs a lot of love to really compliment his kit. He’s got the pieces of a strong frame EVEN WITH his awful energy requirements, but he needs to come together to really be a full frame. I still enjoy playing him and encourage you to at least try him out. 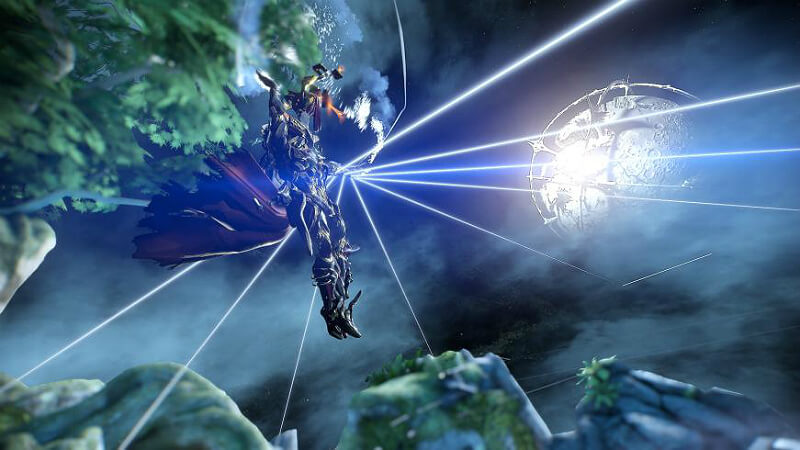 This guide is subject to change and additions as I play more with Revenant. I hope to add some videos to showcase him and how things all come together.

This is my first guide on Steam, so I hope you enjoyed it (and if you did, be sure to like so other Tennos can see it!). I’d be very happy with constructive feedback on the guide, my presentation, and the videos (once added).

I’d like you to share your builds/experiences with Revenant. You may have something that I missed, haven’t tried, or haven’t seen yet.

I hope you enjoyed, thanks for reading! 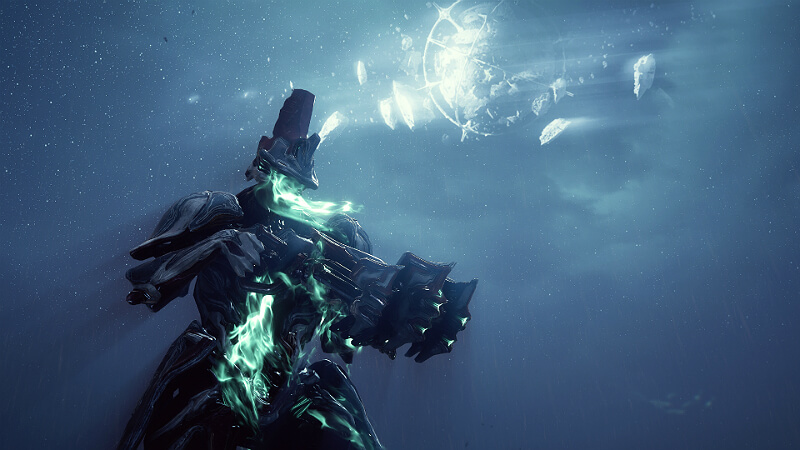 Last 10minutes of my 1hour solo Mot run with Revenant.

Note: You can place whatever you want in the open spot (I’d go for Umbral Vitality in place of regular Vitality and then slot maybe Glad Resolve or Constitution), I did not reforma him when I did this run so I didn’t have room to add Umbral Vit and then use that spot for something else.

Time stamps in the description.