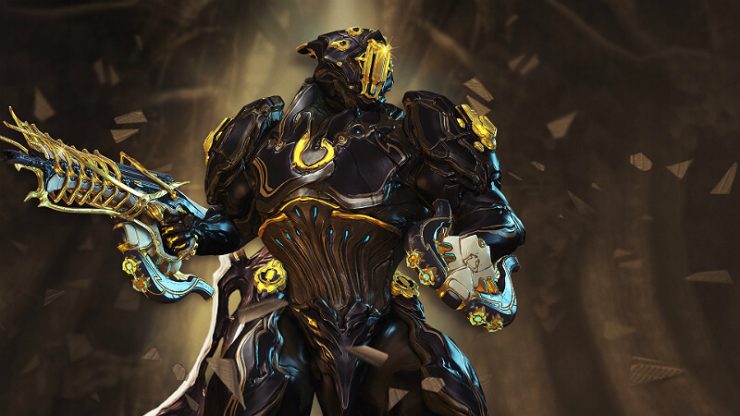 Since the unvaulting of Rhino Prime, I expect many players will now have acquired it and probably want to make it amazing. After doing tons of research and calculations on excel and warframe builder, I’ve broken down Rhino prime into three main builds that most veteran players are probably already using some variation of. Get ready for a huge text wall and feel free to make any suggestions and corrections! 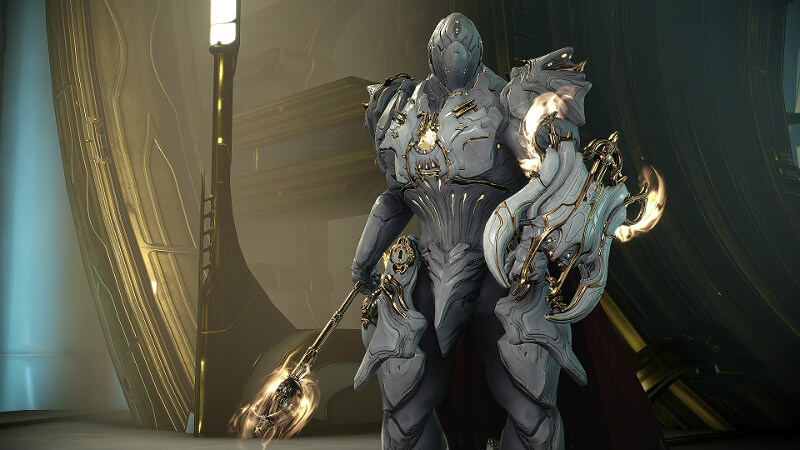 Rhino is usually everyone’s first warframe farmed and built after the starter frames. It is easily the most recommended ‘beginner’s’ frame that can carry you through the star chart purely by relying on Iron Skin. But Rhino is not a one trick pony. It can do so much more and fits into multiple meta roles e.g. ESO buff, tridolon buff/DPS, in addition to being an indestructible machine of death. Like with all builds, there is so much variation based on player preference, mod availability, mod rank, and forma count. I will be presenting several ‘end-game’ builds which assume you have every rare, corrupted, primed and umbral mod at max or near max rank although you can obviously substitute other mods for the one’s you don’t have. 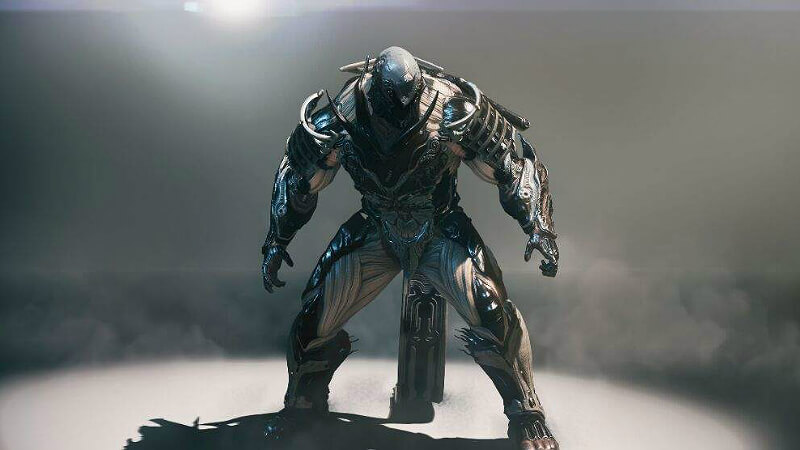 First let’s break down each ability and the augment. All detailed info can be found on the wiki so I will only highlight important aspects: 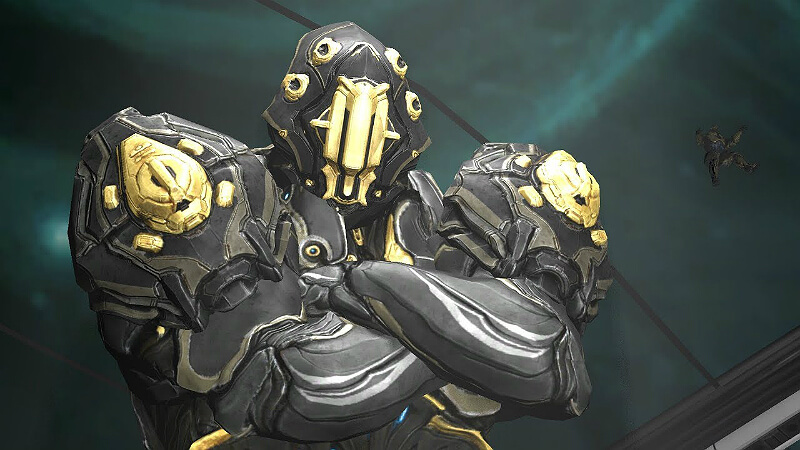 Arcane Vanguard Helmet (+25% sprint speed, -5% power strength) – I personally always use arcane vanguard unless playing the buff since arcane vanguard makes Rhino tied for the fastest base sprint speed with Loki, which becomes even faster with Armored Agility. Of course they are in very limited supply and the run speed is generally inconsequential with parkour/naramon dash and of personal preference, so don’t be concerned about buying one.

Arcane Guardian (20% chance on receiving damage for 600 armor for 20s) – this provides synergy for Iron Skin since an extra 600 armor equates to an extra 5000 base health and an extra 10,000 health per Iron clad charge hit, which equivalent to a flat 80% power strength bonus. However, Iron Skin has to be OFF for you to take damage and proc Guardian so this is only useful just before you cast Iron Skin. 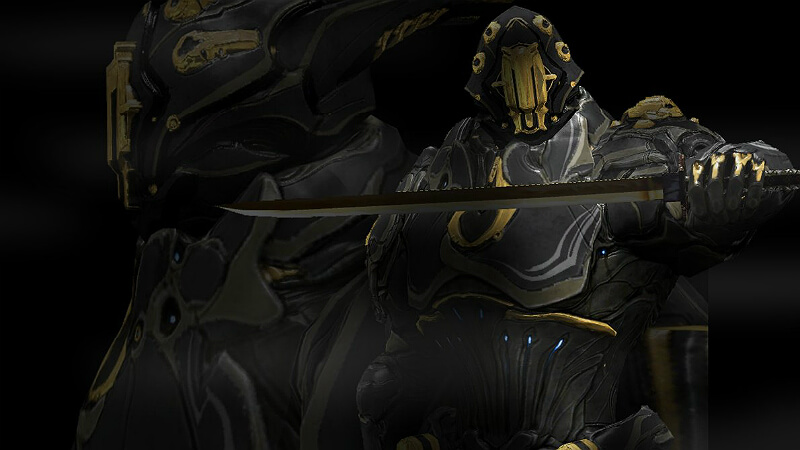 Honestly you can use anything you want with Rhino. Rhino is great for leveling new weapons with no catalyst/mods since you can Roar to really boost the low damage. 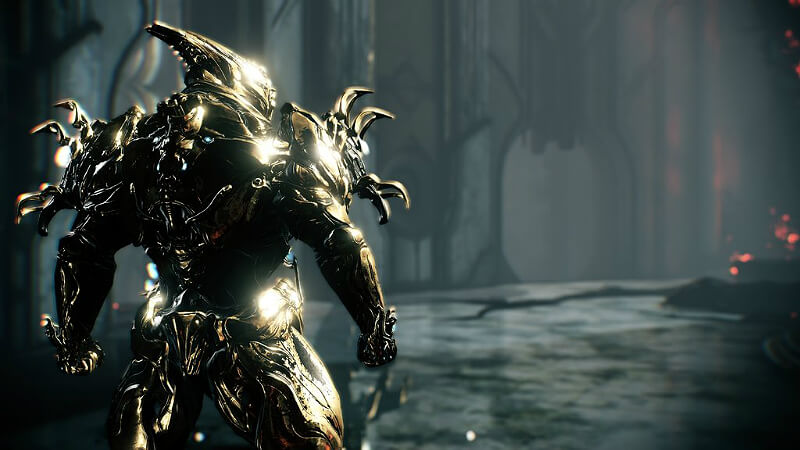 On Rhino Prime, Iron skin colours the whole frame the colour of your accent colour, rendering your base fashion frame pretty much useless. I believe certain the deluxe Palatine skin and certain tennogen skins are not affected by this but I’m not sure. I am open to suggestions. 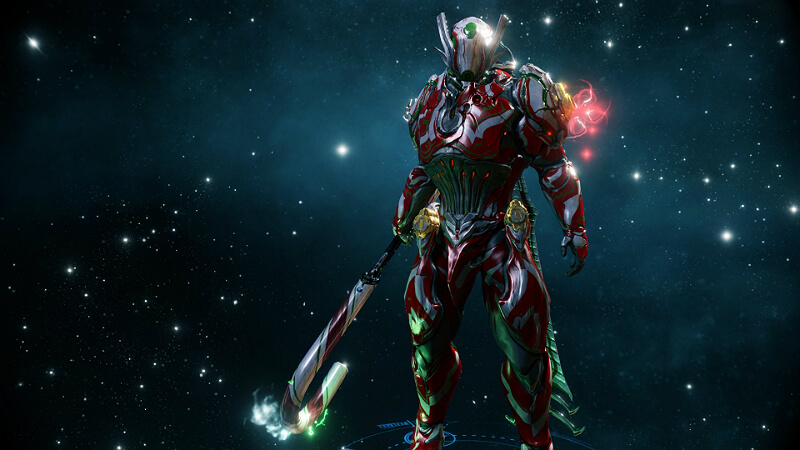 It’s a good idea to plan what polarities you want before you start adding forma since then you may have to reverse some decisions if you add the wrong polarities. 2 forma is the minimum to make all three builds work. 4 forma is the maximum necessary to fit in max rank mods. You can add more forma if you want but that may change the way other builds work.

I’ve changed my mind a few times about the optimum way to polarise and have confused myself a few times along the way. There are a few ways to build this and you may waste an extra forma or two trying different things like I did until you settle on something you like. Basically the builds diverge if you decide you want to run the Umbral bonus vs running an extra V polarity to fit either primed continuity or energy conversion. The umbral build creates the highest achievable tank build and a decent roar build while the energy conversion geared build creates the highest possible power strength for roar at the cost of slightly lower tank. At this point I think it comes down to personal preference but I ultimately was seduced by the power of Umbra.

Here is the order of forma I think you should place:

This is the flexible ‘everyday rhino’ build that lets you face tank anything with an impossibly high Iron Skin, allows you to use roar on occasion to buff damage and is mobile enough to speed run missions. Lots of variations can be made to suit your needs: 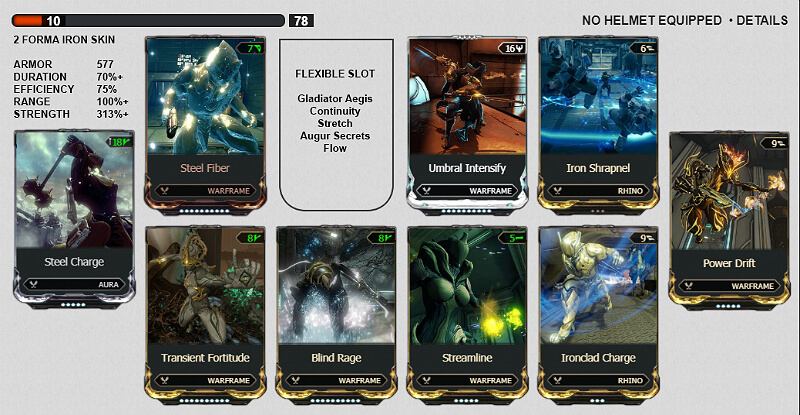 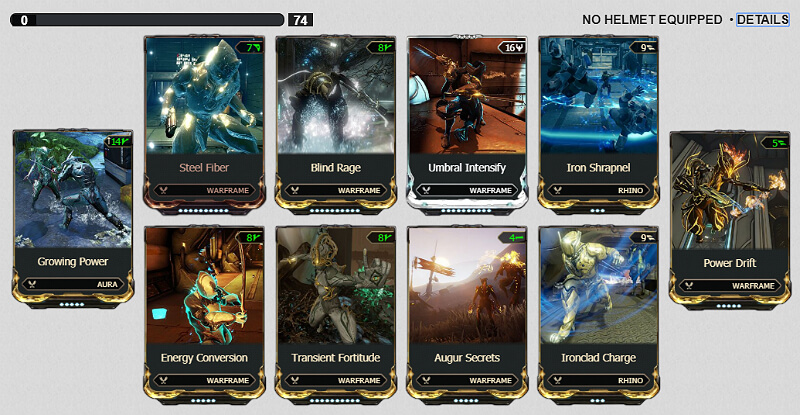 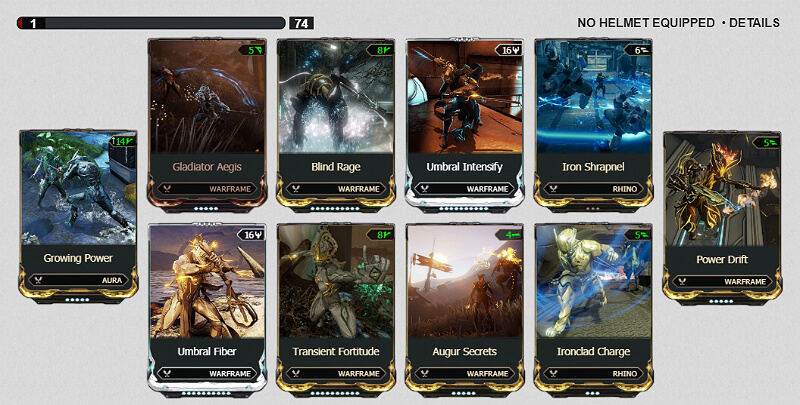 Both armor and power strength directly affect Iron Skin health, but Gladiator Aegis or Armored Agility provides more iron skin than augur secrets so I would stack armor where possible.

Vitality and redirection are NOT needed since a massive Iron Skin will be active at all times and you will never take damage to shields or vitality.

The key to the build is Ironclad Charge which calculates a HUGE bonus to Iron Skin after running into enemies.

In the 4 forma build with Umbral steel fiber, the umbral bonus gives 373% strength and 776 armor, which even though is lower in total possible power strength, actually calculates the highest achievable iron skin numbers of any build due to armor scaling, with a base of 12000 and 13500 for every enemy hit. Note that iron shrapnel must be rank 0 to fit other mods at max.

You can view how much Iron skin health you have by going into the abilities menu just after casting iron skin. Here are some real life examples of the 2 forma build:

This is the meta ‘buff’ build that you would bring to hydron, elite sanctuary and tridolon hunts. Obviously Rhino’s role here is simply to provide the maximum possible damage buff with high power strength for a reasonable duration. Range can be neglected if the team sticks really close in defence or ESO, but cannot be neglected during tridolon as everyone is often spread out. Efficiency takes a huge hit but this is negated by zenurik, EV trin or energy pads, and you only need to cast once every minute or so. Note that at 45% efficiency you will never be able to stomp without flow/primed flow. 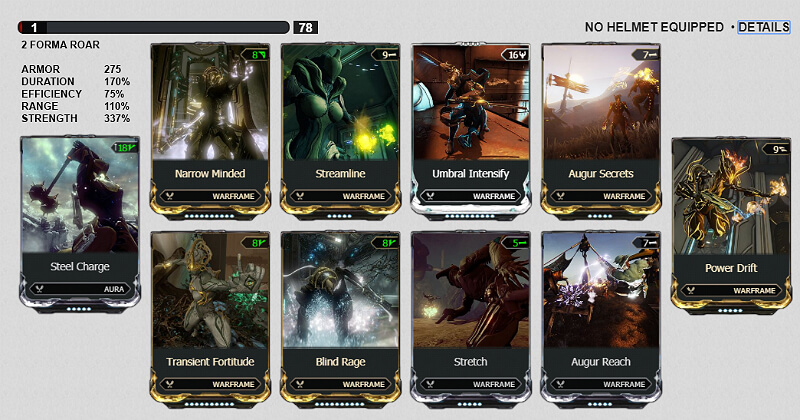 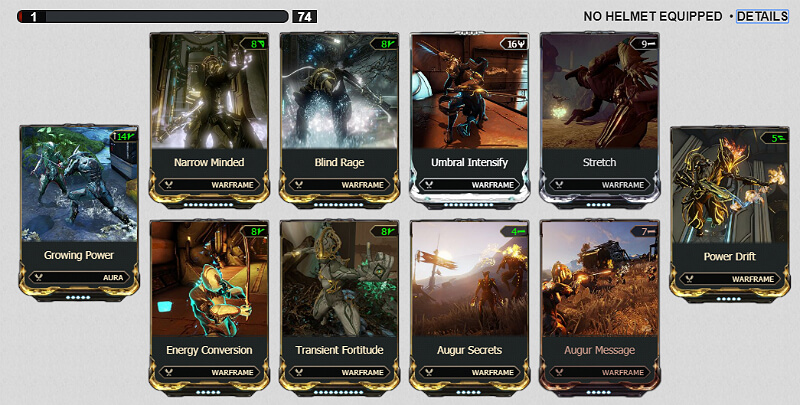 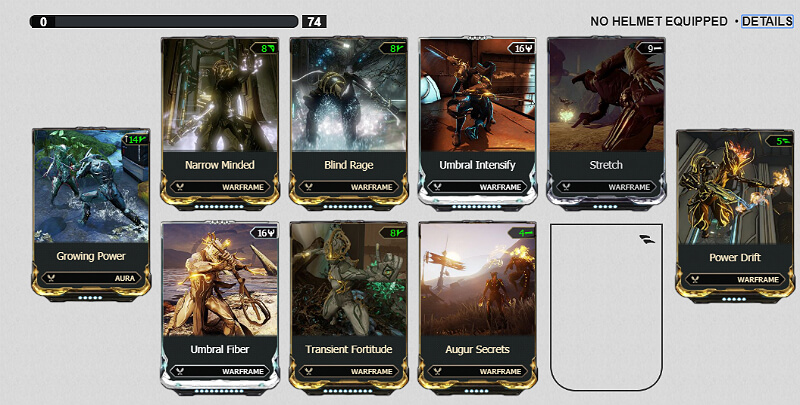 In the non-umbral build, you can fit either energy conversion or primed continuity in the V slot.

In the umbral build, you have to the leave the augment slot empty. You can also switch out the Umbral steel fiber for energy conversion or primed continuity as well, just losing tons of armor, which is fine for premade groups e.g. ESO. If you plan on taking this to tridolon, you would probably want more range and efficiency, preferably at the cost of duration.

This is a lot of fun to use and is great for defence, excavation, interception e.t.c. At 250% range, rhino stomp has a radius of 63m, which is basically the size of Hydron if you cast from the defense pod. Going to max 280% range makes it 70m, but I don’t think a 7m difference is very substantial.

It is also the go to build for fighting certain bosses where they have tiny hard to hit body parts in a small window as stomp can slow them down to a crawl, allowing you to unload completely into them, as long you time it right. You are also much tankier than other slow frames like Nova/Frost. Examples of such shitty bosses include Vay Hek, Lephantis, and Hemocyte from plague star event. 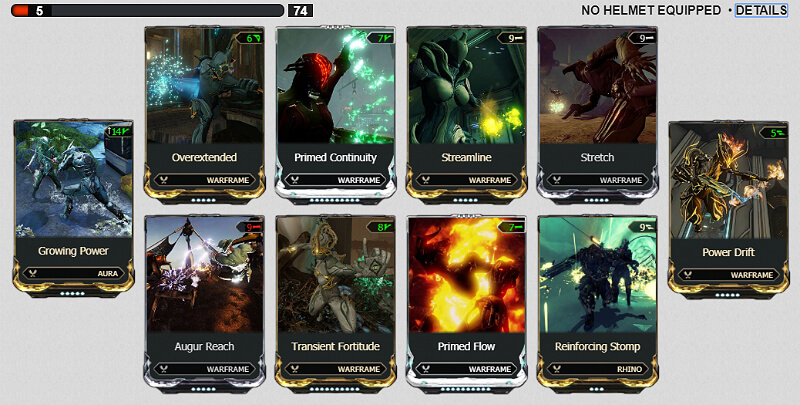 The basic idea is to stack lots of range (at least 235% using overextended and stretch), moderate efficiency and duration. You can let strength drop below 100% but I enjoy having a better Iron Skin and Roar to round out the build. Reinforcing stomp is great because the constant stomping will restore Iron Skin.

You can also change out either stretch or streamline with ironclad charge for tanking. With the insane charge range, you can easily hit anywhere between 10 and 20 enemies which nets you up to 13000 and 24000 health respectively. Nothing compared to the Charging Tank build but also nothing to scoff at. Note that with this much Iron Skin, each reinforcing stomp of 10-20 enemies will only recover between 5-10%.

The 5 forma build from before is the same as the 4 forma build except it’s even easier to fit mods on.

I may try to update this with some gifs of the builds running in action.