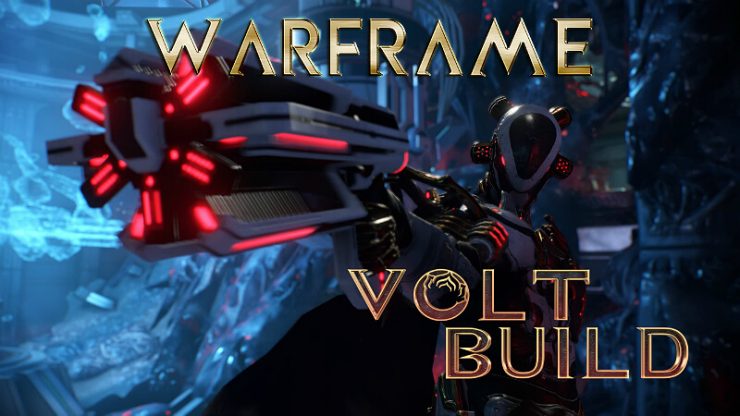 Tricked out and expensive builds for Volt lovers. Cheap builds also included! This guide contains speed, raid, and melee tanky builds and a short parkour guide. With the speed builds, you’ll get more done in less time than you ever thought you could. Run fissures, sorties, alerts, invasions, kuva, and raids faster and have an edge over the competition in time limited events such as Alcolyte farming. Be a great contributor in raids by shortening completion times using speed buffs and be a great option for the team as bomb carrier. As for the melee tanky build, I got tired of being limited to low-level content. I also got tired of running true melee tanks (E.g Chroma) in survivals because of how slow they are. Meleeing enemies running away is such a pain. With tanky melee volt, those issues are solved on top of having increased DPS from buffed sprint, reload, and melee attack speed. 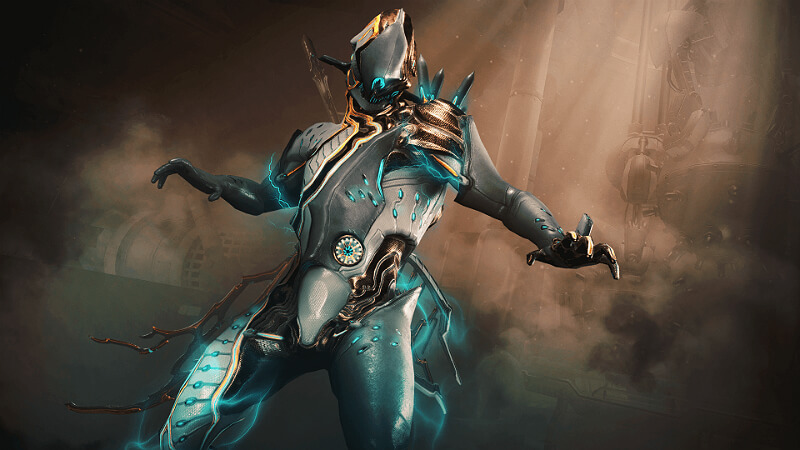 In this guide I will include fully tricked out Volt builds where I spare no expense in formas and arcanes. For people who don’t want to invest the amount of time and resources, I’ve included cheap builds which require less formas and no arcanes.

Volt is a very skill based warframe. The more skill you have the faster your speed runs are going to be and the more bullets you’re going to dodge. Many of these builds and suggestions are not for the faint of heart and are designed for absolute Volt enthusiasts like myself. I mean I ABSOLUTELY LOOOOOOOVE VOLT. That’s why I went so crazy with these builds. But if Volt is your favorite warframe, why not go all out?? Trust me. The benefits are truly rewarding especially in the fun and efficiency departments.

SPECIALIZATIONS (Level 40 missions and below)

ARCANE SYNERGY AND IMPORTANCE WITH BUILD

Protip: Using strafe to turn lowers momentum while using mouse to turn maintains momentum. Only strafe when needed and in open environments use the mouse.

This solo speed build is similar to the team speed build with some changes. Everything is the same except the following mods were switched from: 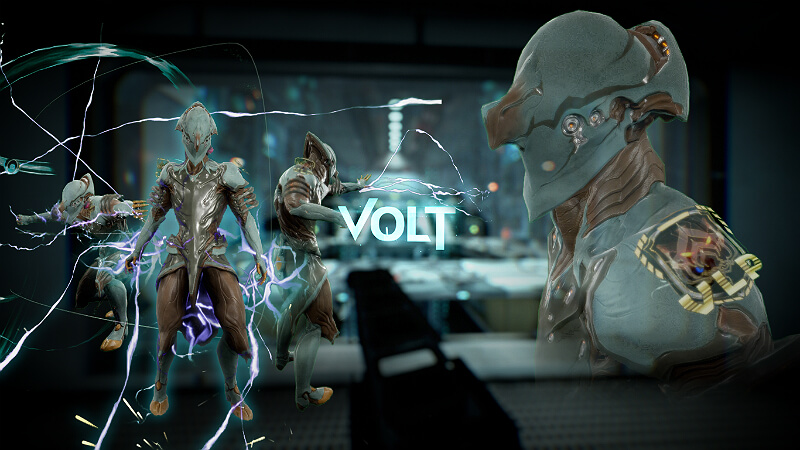 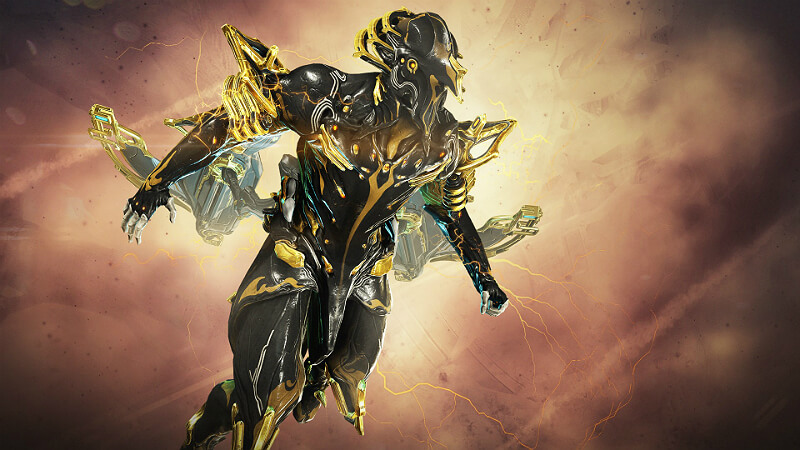 I sprint whenever I can since Volt’s ability and mods buff sprint. However, we cannot sprint in all situations. Here is a guide for maxing speed while forced to jump or when it is optimal to jump. The sprint buffs help jumps because the take off speed is based on sprint speed. Whenever you hear wind blowing (sounds like wind turbulence), that means you’re traveling at high speeds. The sequence applies to all warframes with or without the speed buff.

Protip: Often times when bullet jumping upward to a higher platform, the bullet jump over shoots. Tap glide to stop the flight. Then do a kick forward if needed to change trajectory 90 degrees onto the platform.

This build is designed around Volt’s fourth ability, “Discharge,” and is effective for nuking maps on all regular planet missions. This build was tested against level 43 heavy gunners and is able to kill them in one cast. Be mindful that more damage is done to enemies within 20 meters. If enemies are within 20-50 meters, less damage is done. With this build level 43 heavy gunners within 20-50 meter range were still killed in one cast. However, it took a second or two longer. This build is also very energy efficient and each cast will only cost 25 energy.

This was the mission results at an Eris, Akkad fissure. As you can see, this build has no problem nuking the map.

This is an amazing build for regular planet exterminate missions. Casting speed will give a bit of a movement boost, all the while casting discharge to nuke entire areas. The best exterminate teams usually consist of a volt and ember/equinox. However, this setup isn’t always available especially in pubs. This build brings the best of both worlds in a single warframe! Be wary of energy and maintaining zenurik’s energizing dash buff is recommended.

Here are the mission results after two waves. I ended up with 1542 kills which is pretty average, but at least better than banshee.

This build is used in the team composition:

In ESO, Simaris will prevent you from spamming discharge, so you’ll have to keep gaps in between casts.

Setting down shields for the team will be helpful.

This build is centered around volt’s shield. The shield costs 35 energy and lasts 70.5 seconds. The shield boosts +50 electric damage and +200% critical damage while shooting through it. To activate the damage boost on the shields, you must cast your first ability, “Shock,” at it. Three shields stack for +150 electric and +600% critical damage but ONLY for regular weapons. The shields DO NOT stack for amps. Therefor it might be best to cast single shields, but spread out so that teammates have a clear view of the teralysts. Once shields are down and it is time to use regular weapons on limbs, you could opt to stack 3 shields in that case. The rifle amp mod can be replaced with deadeye if using a sniper rifle.

If all or most of the team shoots through the shields, the teralyst’s shields will be down in less than a mag. 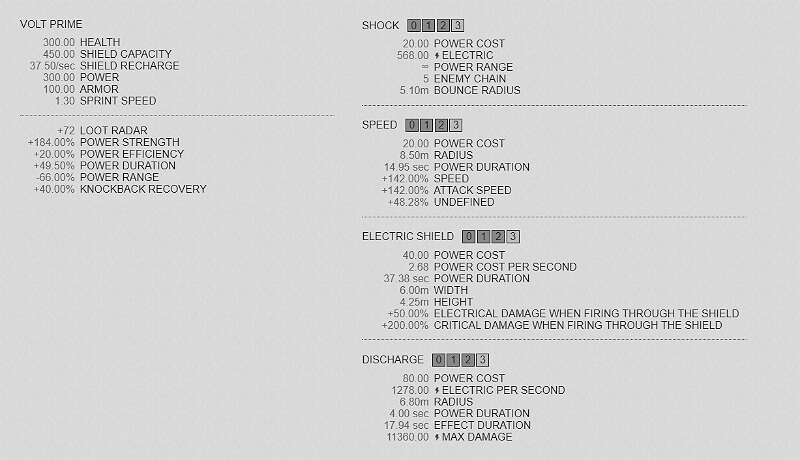 This build is for a ton of +loot radar useful for quickly farming things like syndicate medallions, cetis wisps in POE, and cephalon/somachord fragments. The radar screen shows little squares which could potentially be what you are looking for.

CLIPS FROM LAW OF RETRIBUTION RUNS (NORMAL AND NIGHTMARE)

It is obviously not a full on tank frame but it will survive in sorties and similar higher level content.

*This section is for newer players who currently do not have enough platinum to buy Volt Prime, are short on endo, and do not have prime mods. These builds require 1 orokin reactor only! 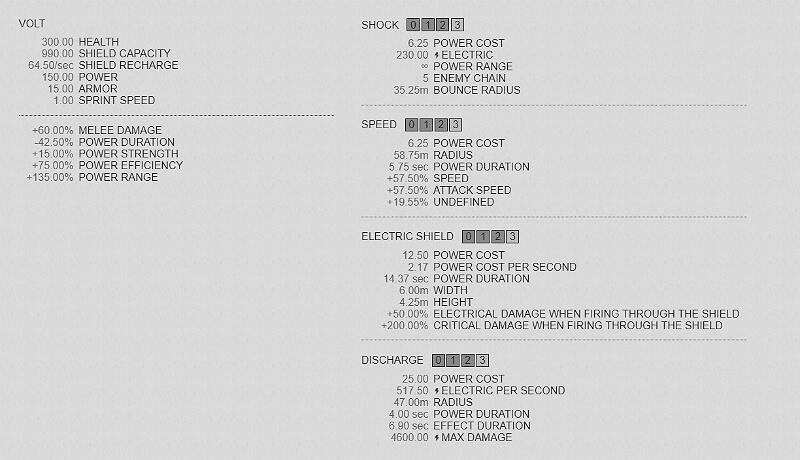 The drawback to super speeds is that in tight maps super speed can actually make it harder to get around. Also boosting a teammate who cannot handle super speed can cause more trouble than good. Another draw back is it’s going to take practice to get full use out of speed. Some people also complain about how squishy Volt is. In that case, the tanky melee volt may be the way to go, since it too can be used for speed runs. It just won’t be as fast which depending on the player could be a good or bad thing.

Probably the most versatile build in this guide is the tanky melee volt. It can be used in a much wider array of situations. I highly recommend it. It just won’t be as much a speed demon as the speed builds due to the speed builds being very specialized. On a positive note, the lesser speed makes it easier to handle.