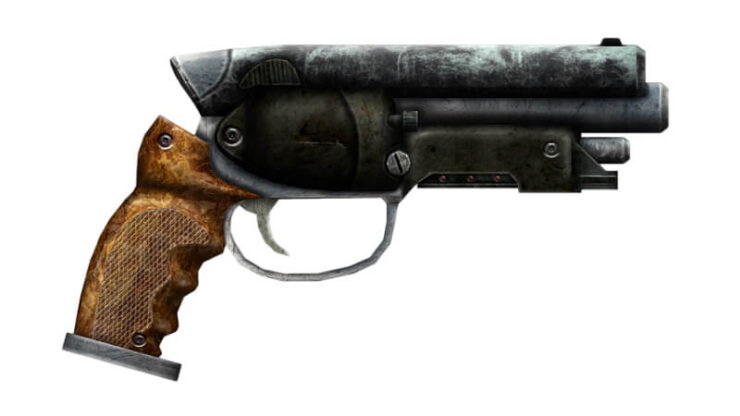 I’m about L30 now, and – whilst I have the Medicine Stick, and think it’s pretty awesome – That Gun has been my standard weapon for most of the game so far.

About my only real grumble is – it’s not a ‘holdout’ despite the non-unique 5.56m pistol being.

Honorable mentions go to Medicine Stick, because it is an accurate ranged killing machine, and the protonic inversal axe – because it’s PURPLE GLOWY AXE damnit.

So go on. Indulge yourselves. What’s your favourite and why? 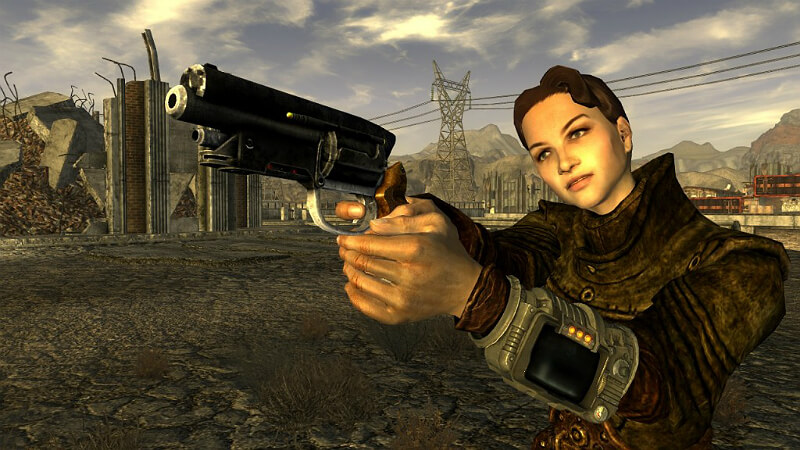 That Gun is a fine weapon. Its neat with WMX (Weapon Mods Expanded) mods as well adding a 9mm scope, laser sight, and extended barrel. Its a really good gun for a “one gun” kind of character. You know, someone who has a gun, knows how to use it but isn’t based around guns or necessarily even combat I think WMX makes it sketchy with the cowboy perk though

I like and prefer the .45 myself. Plenty of punch, suppressed and it looks good. It’s also concealable.

A Light in Shining Darkness is interesting but it’s just weird to my eyes. It’s actually a fairly realistic gun though, Colt Officer’s Model with “Guttersnipe” style combat sights for point shooting. Very 1970’s and 80’s tacti-cool and I could easily visualize Joshua Graham using it with the Center Axis Relock technique (what the Way of the Cannanite is) and point shooting.

If you want a more conventional late game gun and are on PC, I’ve enjoyed Black Jack and 45 Of Ace. Its a pair of .45’s with beefed stats that work with all the perks (including Way of the Canaanite) and nice custom handle textures.

Also off topic but there is a mod that lets you keep that perk too, I recommend it.

When I don’t play with mods like DLC in the wasteland, I’ve had good results with the humble 10mm. Ammo is everywhere, it packs a good punch and can be made more accurate and to carry more ammo. What’s not to like?

You start with a decent one too with the Couriers Stash though its not good in casinos and doesn’t show mods,

For along gun Hunting Rifle with mods and a 10mm with mods Simple, reliable and effective and for a shotgun, I usually don’t play those, a hunting shotgun with long tube and choke and of course the two perks is solid.

With mods from WMX, the Riot Shotgun and Dinner Bell hold up well too.

It’s durable, adequate for what I use it for (mostly killing bloatflies and the like) concealable and works with both cowboy and soldier. It’s good in most games and playthroughs

When mods come into play WMX the knife is terrifying.

My favorite “hand to hand” weapon is Love and Hate. It’s amazing with WMX mods or just a few hand to hand tricks and unlike the also awesome Pushy, it’s subtle. Sometimes you just don’t want a pneumatic glove in your hand. The Boys at Gomorrah don’t like it.

Anyway when it comes to Energy Weapons I am with Mike_Durden. The Laser rifle with mods and optimized energy cells is a killer on console or unmodded.

If you are on PC, WMX and several other mods let you scope the AER14 Prototype.

I’ve run that with Project Nevada and its crazy strong gun. Its not quite as strong as a Gauss Rifle or the YT whatever unique and its not super durable (build repair kits, many repair kits) but its basically the ravening green beam of death and on those occasions when you have time to set up the shot, you can use its special Project Nevada ability to supercharge a beam.

With a decent Luck score, you’ll be able to one shot disintegrate death claws quite often. Its only flaw is for the rare quests in which you really can’t risk disintegrations. You need some help like maybe Boone or Cass for that.