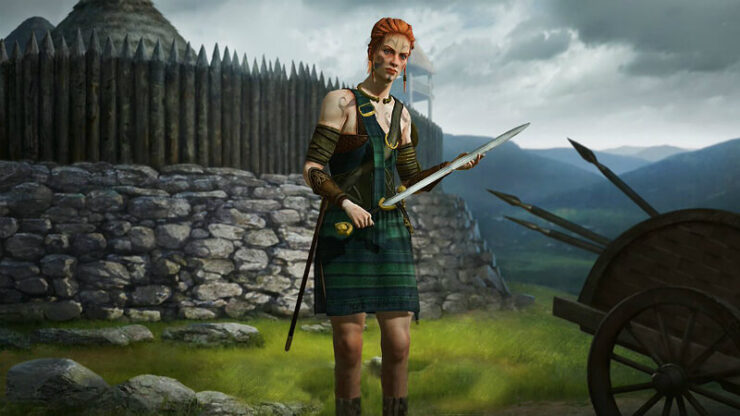 The Celts as led by Boudicca

A spearman replacement with the same strength and movement points (11 and 2 respectively). This unit does, however, gain faith from kills (equivalent to half of the opposing units combat strength), meaning sending a couple of these barbarian hunting early on can really help net you a religion. In addition, the Pictish warrior also has a 20% combat bonus when fighting in foreign lands and pillaging tiles with these units does not cost any movement points. The Pictish warrior also lacks the bonus vs mounted of the regular spearman.

The Ceilidh Hall is an opera house replacement which also has the benefit of +3 happiness, the highest amount of local city happiness offered by any building in the game – this really helps the Celts be a strong wide civilisation in the mid-game! Other than the happiness boost, the Ceilidh Hall functions almost identically to the Opera House – the production cost is the same (200 hammers) and amphitheatres are required to build them. The only other difference is the 2 gold maintenance cost when compared to the 1GPT cost of the normal Opera House.

For this section, I’m going to refer you to the excellent Steam guide regarding the Celts by /u/Zigzagzigal – an article including guidance on how to use the uniques, which policies are good picks and even ways to counter AI Boudicca! It’s a guide which I would highly recommend for anyone wanting to learn more about and optimise strategy when playing as the Celts!