My Thoughts on Godmaster – Hollow Knight 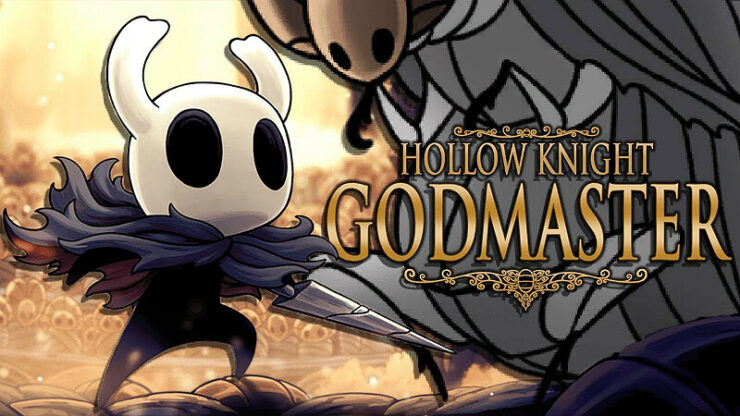 Hello. You might know me from YouTube. I’ve been making boss guides for Hollow Knight for a little over a year now. Why? Because I love Hollow Knight. Really, I love gaming in general and I want everyone to enjoy it as much as I do, in their own way.

So I found this game that I loved and said, “I want to make the kind of boss guide that I’d like to see,” about a game I really enjoy.

And I know I’m way behind the curve in terms of new content so as Gods &-Godmaster approached I said, “I’ll stream it live on Twitch so we can discover it together!” This way there would be some relevant content and I could experience this with many of you.

And so I started my 106% (no Hive Knight at the time) save file and heard about where the Simple Key was and really enjoyed getting that key. Then heard that I needed to go to the Royal Waterways and I found the Fluke Hermit and the Godseeker sarcophagus and saw Godhome and the excitement continued to build. Godhome is beautiful and I loved the Pale Lurker encounter and that there was already some vague lore being spouted by the Fluke Hermit.

Everything seemed great because Team Cherry had promised a new mode and a lot of us wanted a boss rush (“Certainly would help me,” I thought) and so I was excited to unlock that. And after exploring all that I could for my first visit to Godhome (the Hall of Gods was so cool!), I tried the first Pantheon. I had heard about the Bindings but didn’t know what they’d do so I put them all on and went in. Got to 3rd or 4th to last boss on that first try with all 4 bindings. And I thought, “that was intense!”

Then I went in with no bindings and got a feel for the Pantheon. I loved the Oro and Mato fight. It was hard and I tried to not imagine it with all 4 bindings but I liked the brief moments the brothers had with each other. And then I went to the next pantheon. Sheo is a really unique fight. Literal splash damage everywhere and the colors are wonderful.

I went back and defeated Hive Knight to access Pantheon 3 and whew boy. Sly is a crazy little bug. But again, I persisted. I had to see everything because clearly there had to be more to this than just a bunch of boss rushes. Somewhere along the line I learned that benches weren’t checkpoints (I think it was during Pantheon 1 when we all (me and the chatters) wrongly assumed the benches worked like normal). It was Pantheon 3 where I started to get tired and bored.

Pantheon 3 was defeated (no bindings still because holy cow my brain and hands were not ready for that) and we moved onto…another pantheon. More bosses. Okay. Sure.

I eventually reached the Pure Vessel and I loved it. Yeah, it took hours of practice in the Hall of Gods and still more attempts at the pantheon after the practice but I love Pure Vessel’s theme and look and fight. Well done again Team Cherry.

And then we got a short cutscene that was adorable and I heard the scream and figured out who the true final boss would probably be (post titles here and the HK discord general discussion thread have spoiled it and proven my hypothesis correct). And then? Another Pantheon. This one with non-Ascended-damage Ascended forms of some bosses. And this pantheon was all previous Pantheons strung together. This was the true boss rush (sort of because now some of the bosses were different than their original forms). I got to NKG on my first try. I learned that it was PV and the true, final boss after that. But I was disheartened and exhausted.

Even Godseeker mode was a let down. Apparently Godseeker’s dialogue is different in that mode but that’s all to do: the Pantheons and hall of gods again! The end.

Yes the Eternal Ordeal is a fun distraction. Yes I like Zote singing the theme. Yes I think Godhome looks gorgeous. Yes, I like that more people talk about the Delicate Flower. I love most of the new bosses. Pure Vessel, Sly, the Nailmasters, Sisters of Battle (so good! Glad they are only here though because I think Mantis Lords are fine as they are in the regular game). Haven’t fought final, true boss so won’t comment. Winged Nosk is okay. Enraged Guardian seems no different to me.

But the Pantheons? No. Poor, lazy design. Godmaster is a pure grind. The end. There is so little else to this content and what little else is there is almost completely hidden by the grind.

I think the Grimm Troupe was 95% perfect DLC. There was a story that was accessible to most and if NKG was too hard/too time consuming/too whatever it was that made that fight unenjoyable, there was an option to complete the story without it. Path of Pain was optional and provided only extra lore that I still say wasn’t worth the effort (yes I’ve completed Path of Pain).

Godmaster is like the Trial of the Fool but requiring Path of Pain skill and patience. And the story is hidden behind all of that. Which alienates the players who have enjoyed the game so far because you want to talk about a difficulty spike? Holy cow. Without checkpoints, the difficulty curve went from a gentle incline to a sheer cliff up for many.

I know that some are enjoying the difficulty and the grind of Godmaster. That’s awesome! I’m happy that you are enjoying the content. Truly. What I’m not happy about is the rest of the community who only get to enjoy the content vicariously: through me and through others who are able to put in the time, the effort, or who are masochistic (it me) to get through this. The main storyline of an expansion shouldn’t be hidden behind something like this, something that is so difficult. Even the “story” of the Hidden Dream expansion was extra. It didn’t impact the core canon of Hollow Knight.

To those who’s response to me and others who are complaining about this DLC is to “git gud”: you don’t know us. You aren’t us. And that message doesn’t help anyone. We aren’t mad at you (well, some of us might be but I’m not). We aren’t saying you can’t enjoy this game, this content. We are talking about our frustrations with an expansion that seems to be wholly out of character from the original game. Trial of the Fool was beautifully named because it was extra content and meant to be played by those of us who wanted to take on such a challenge. Completing it didn’t reveal the true nature of the Hollow Knight or Hornet or anything. It was just for the challenge. Godmaster is taking the challenge of Trial of the Fool and the intent of it and hiding impactful lore behind it. That’s not right.

And to Team Cherry directly: What happened? I’m going to finally mention something that’s been bugging me for a while. I helped back you on Kickstarter. I remember the Stretch Goals and the achieved goals. Where was Godmaster in there? Where was the Grimm Troupe? Hidden Dreams? Lifeblood? The Colosseum of Fools was an unmet Stretch Goal. Hornet as a playable character was a met Goal and we’re still waiting. Why? Also, why is that going to be paid DLC? It was a backed Goal. We should have gotten that before any of this other free stuff.

I think you’ve forgotten (or perhaps never realized) that the “git gud” screaming crowd isn’t the majority of your playerbase. It almost never is for any game. And I think you screwed up with Godmaster. You listened to the loudest players but not the most players. This expansion is disappointing. The content, the gameplay, is lazy. It’s just boss fights. More and more boss fights. Yes, the new fights are well designed (so far as I can tell) but it’s just boss fights and more boss fights and repeated boss fights with some changes to the boss or damage or arena. But boss fights. Minimal exploration. Minimal story it seems too. And the final challenge is just all boss fights one after another. Took some real creativity for that one didn’t it. Yes I’m lashing out because I’m angry. This was the wrong call Team Cherry. Thanks to this Godmaster move, I am now going to wait and see what the DLC is like (from others) before buying the Hornet DLC, as much as I’ve been wanting to see her story from the first time I played through this game.

I think I’m done. If you’re all the way down here, thank you for reading. I appreciate it.