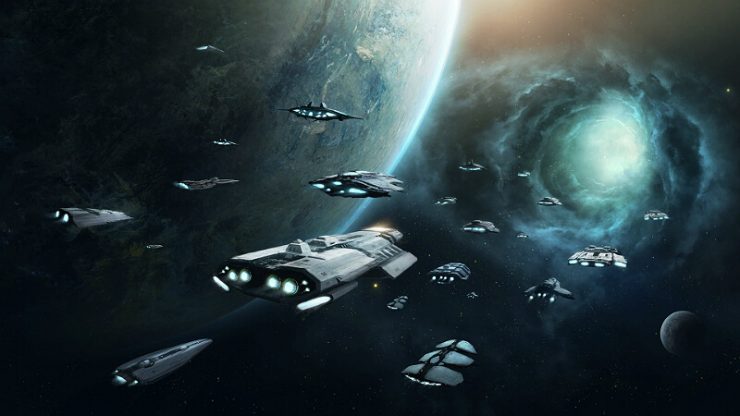 What’s been your favorite Stellaris Civilization/Species to roleplay as?

Half the fun for me for in Stellaris is picking traits and ethics like I’m playing a roleplaying game, my favorite is my Ascendant Space Cats who survived the apocalypse and are Fanatic Xenophobes mainly because they are just scared of outsiders blowing them up which makes diplomacy always more interesting.

Description: The Corassians are a species of carnivorous felines hailing from the frozen alpines of Meknassa. A rugged, harsh land where all species had to work together to survive, the necessity of rationing and sharing Meknassa’s scarce resources colored pre-historic Corassians’ psychology into one greatly concerned with societal affairs. On the one hand, they remained comparably aloof like the felines’ terrestrial analogues; they were very social, but also very appreciative of wide berth being given to them. On the other hand however, the Corassians soon mastered the art of interpersonal skills, bonds and devoting oneself to your loved ones before yourself. By the time the Corassians have achieved sentience, they were quick to adopt a monarchial society, as years of working as a pack of predators have made the Corassians most comfortable with that way of thinking. Meknassa itself was a frozen landscape where resources were scarce; Corassian hunters had to jump on every opportunity imaginable to catch their prey. The good news is that this leads the Corassians to being very driven, a quality that bolsters their already-likable personalities. However, this means they’re notorous for being incredibly stubborn, regardless of how smart they are; Corassians thus learn from their experiences much more slowly than other species. Regardless of this flaw, the Corassians were quick to develop a proud monarchy where the vassals devoted themselves to the King and the King watched over his people. Arguably, their legendary stubbornness have proven beneficial in the scheme of things; immense societal pressure ensures the King will act like a King ideally should act, giving way to a surprisingly efficient autocracy where the King is just enough to ensure the rights of the people. It could be this infatuation with chivalric values and their status as apex predators why the Corassians are not only so courteous, but also so enamored with other forms of life; most end up wholly embrace this fascination with the unknown, and luckily had racial barriers torn down very early in their society. With a proud code of honor, a loyalty to the High King and his vassals and an unquenchable thirst for new experiences, the Corassians are a justifiably proud race of chivalric felines who are open to all walks of life. In their eyes, it matters not where you come from and where your destiny lies; rather, any species that can fight alongside the strong and honorable Corassians are worthy of respect.

…yeah, I have way too much free-time on my hands, lol.