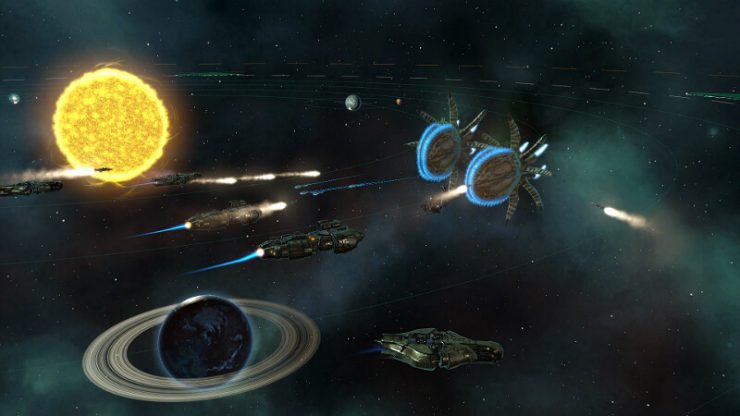 At start, most of the universe is sparsely populated with Space Monsters that you encounter very early. When you research the special project to identify them, you are usually presented with a few options as how to approach them.

If you choose to do a Project to study them, you will get an Empire wide bonus of 5% evasion.

If you choose to kill and disect them (which is not available to Fanatic Pacifists/Spiritualists/Xenophiles), you will get a quest to kill one then four fleets. If you are xenophobe or militarist, you get a 20% damage bonus vs Amoebas for the rest of the campaign. If not, then a 5% energy bonus for your Empire. Just keep in mind, there are not that many Amoeba fleets around and you might find yourself unable to finish the chain.

You will have to research the Project unless you are Spiritualist, then you can do a quest to kill one. Researching the project as a Spiritualist gives your empire a 5% happiness bonus. Others get 10% damage bonus vs Void Clouds, or can get a few Void Cloud systems shown on map. If you kill a void cloud while on the Spiritualist kill quest you get a 10% happiness debuff that last several years. Note that you can still kill Void Clouds without negative effects as Spiritualist if you don’t take this quest or after it.

Unless you are Pacifist, you can kill one of them, which results in a Drone Hunt edict to become available, which when active gives you 50 energy for each destroyed fleet. There are a lot of them usually and their small stations count as well. Doing the Project gives access to Minig Optimalization edict(+15% minerals -5% energy empire wide) for Xenophiles or Pacifists, everyone else gets a few high mineral systems pointed on map.

Kill quest is not available for any Xenophiles or Fanatic Pacifists, requires to kill one then four crystals, and results in a Crystal Hunt edict that gives 50 minerals for each destroyed fleet. There are usually a lot of them. But if you are a Materialist, you get a Greater version of said edict, giving 100 minerals for each fleet. Militarists get a 20% damage bonus vs Crystals instead.

For doing the peacefull Project, you get a 10% Physics research bonus if you are Xenophile or Pacifist, everyone else gets the Sonar edict, where when you enter a system with Crystals and this is active, you can spend 30 energy to instantly survey it.

Nothing! Better ignore them.