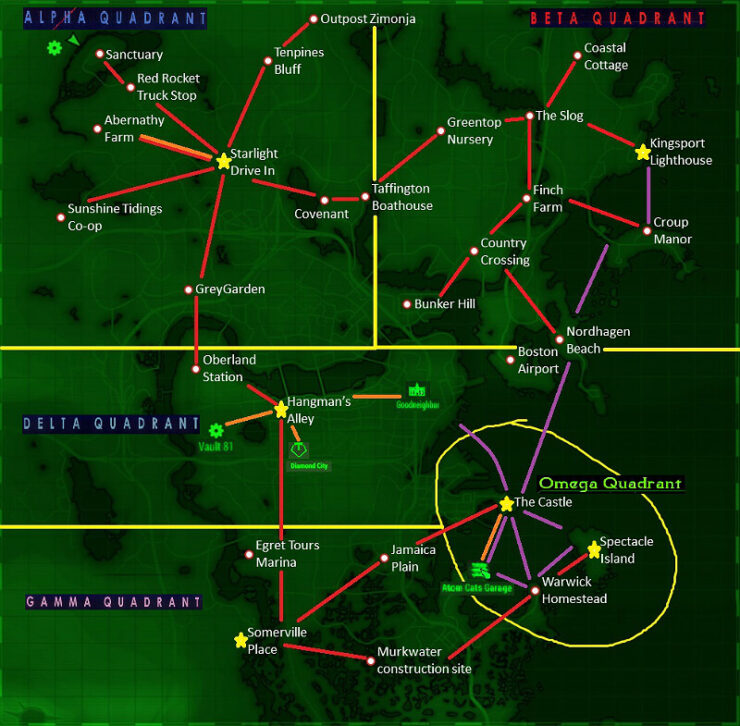 I have the map split up into four major quadrants and a single minor one. Each Quadrant has its own Capitol, the most built up settlement in the area with mass quantities of food/water and merchant stands and are also used as jumping off points when exploring an area. Basically the Capitols are major cities to make mass amounts of drugs and water to sell while settlements are mainly used as checkpoints with just enough food/water production to keep me going from point to point.

Directly between Starlight Drive-in and Abernathy Farm you can find Drumline Diner. If you resolve the conflict there without bloodshed you open up two additional traders between those two points. Combined with the merchant at Abernathy and Trashcan Carla who sometimes stops at Drumline Diner that’s four traders along that short route. Can be used to make alot of caps early game without needing to go to Diamond City.

Note: Originally I had the Delta and Gamma Quadrant labels swapped around but went back and changed that because I couldn’t resist not putting the Glowing Sea in the Gamma Quadrant.